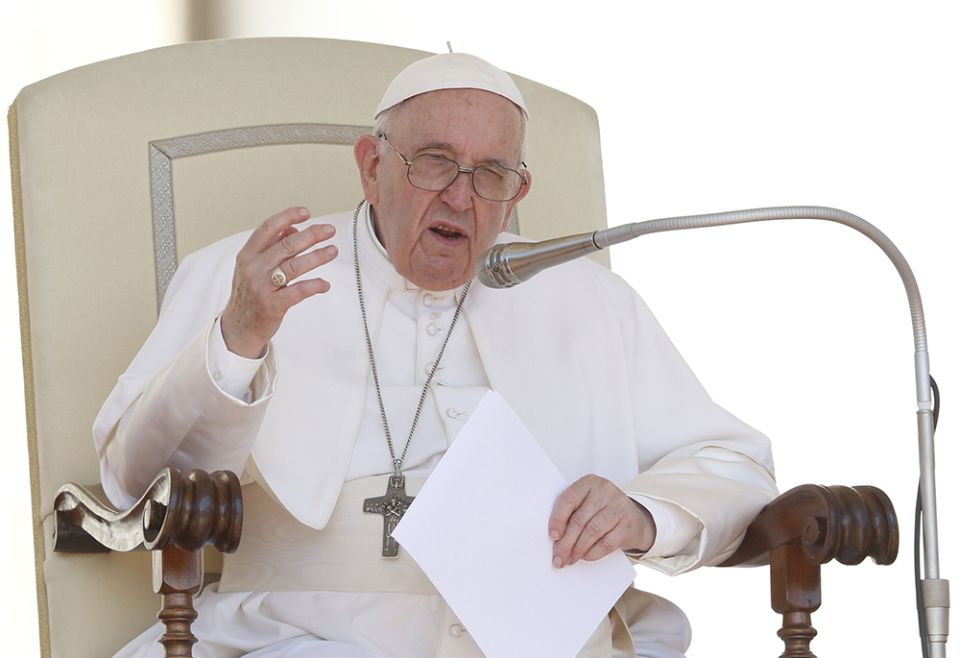 Pope Francis speaks during his general audience in St. Peter's Square June 1 at the Vatican. That day Francis also gave a talk to an international conference of educators. (CNS/Paul Haring)

A couple of weeks ago, I wrote about the danger of ideology to synodality, and gave some thoughts about how we Catholics can create an authentically Catholic worldview without that worldview degenerating into an ideology.

As if on cue, the Holy Father gave a talk to an international conference of educators on June 1 that evidenced both my concern and pointed to some remedies appropriate to the field of education but which also have a wide application.

The pope spoke of our time as one of crisis and recalled the figure of Aeneas as he fled the burning city of Troy, carrying his aged father Anchises over his shoulder and holding his son Ascanius by the hand. (The story was immortalized by Bernini in a magnificent sculpture in the Borghese Gallery in Rome.) "Aeneas saves himself, but not by himself," the pope said. "He brings with him his father, who represents his past, and his son, who represents the future. And so he moves forward." This sets the framework for the pope's address.

A mistaken understanding of tradition is the first source of ideology, ignoring the future by fixating on the past in an anachronistic way. Francis said, "… there is the fashion — in every age, but in this age in the Church's life I consider it dangerous — that instead of drawing from the roots in order to move forward — meaning fine traditions – we 'step back', not going up or down, but backwards. This 'back-stepping' makes us a sect; it makes you 'closed' and cuts off your horizons. Those people call themselves guardians of traditions, but of dead traditions."

The observation "This 'back-stepping' makes us a sect" is very perceptive. There is a kind of traditionalist Catholic who is closed in on himself, whose identity is conflated with a (usually mistaken) appropriation of the past, and the result are communities that are afraid of the world. Their complaints against the world in which they actually live become a laundry list of words which, if pushed, they could not explain in any adequate or meaningful way: secularism; relativism; modernism. The actual warp and woof of history, and of these abstract ideas, escapes them. They need them to be caricatures and so the actual engagement with history is not the objective and is itself threatening also.

The Council of Trent, for example, ceases to be what it actually was: a great reforming Council in which the intellectual climate of the time was engaged, doctrine was developed, and disciplines were thoroughly revised. Instead, Trent is treated as a book, a body of doctrines, now read in translation and applied willy-nilly to the circumstances of our very different time. The result is, as the pope said, a kind of sect.

It is impossible to know precisely what circumstance the pope had in mind. After all, this is the pope who famously closed his first meeting with the media as pope by offering only a silent blessing: "Since many of you are not members of the Catholic Church, and others are not believers, I cordially give this blessing silently, to each of you, respecting the conscience of each, but in the knowledge that each of you is a child of God. May God bless you!"

We can infer, however, that the pope has in mind the kind of intellectually crippling idea, rooted in the writings of the German philosopher of history Johann Gottfried Herder, that cultures are incommensurable. We live in a time when people are quick to claim a privileged hermeneutic, rooted in some notion of identity. It is also a time when self-censorship has become a widespread expectation, lest anyone put a foot wrong and say something that offends the guardians of whatever orthodoxy is at play.

The pope, here, is encouraging us, as Catholic Christians, to make sure that we first follow the Lord's commission to preach the Gospel, not to succumb to that passive-aggressive form of speech, so common in our time, that prefaces any claim with the weasel words, "Well, it is only my opinion, but …". This bespeaks the kind of relativism that impedes the building up of culture per se. Relativism may not be the bugbear some conservatives think it is, but it also something that can hobble intellectual and social engagement.

The irony, of course, is that relativism is, in a sense, half of the Christian equation. One way of describing the core of our creed is this: Jesus Christ became a human person so as to relativize God to humankind, and to relativize humankind to God. The other half of the Christian equation, the balancing half, is that God is transcendent and absconding.

Which leads to the final point: Francis places the doctrine of the Incarnation at the heart of Christian education, seeing humanism itself as a means for resisting the temptations of bad traditionalism and of ideological reification from left or right. He notes "the centrality of the person" at the beginning of his discourse and goes on to say:

Dear friends, in our time, when technology and consumerism are turning us into users and consumers, the crisis can become an opportunity for evangelization, for preaching anew the meaning of our humanity, our life and this world in which we live. An opportunity to reassert the centrality of the human person as a creature that, in Christ, is the image and likeness of its Creator. This is the great truth entrusted to us, a truth that we must bear witness to and hand down, also in our educational institutions.

The link between consumerism and ideology is a topic for another day! But the pope sees the humanistic Catholic tradition, rooted in our belief in the Incarnation of God in Jesus Christ, as the antidote to the intellectual temptations of our time and, just so, an essential aspect of Catholic education.

As the universal church continues to engage in a synodal process of discernment, this little talk by Francis about education can also help all of us to be more attentive to the intellectual and spiritual pitfalls of our time.