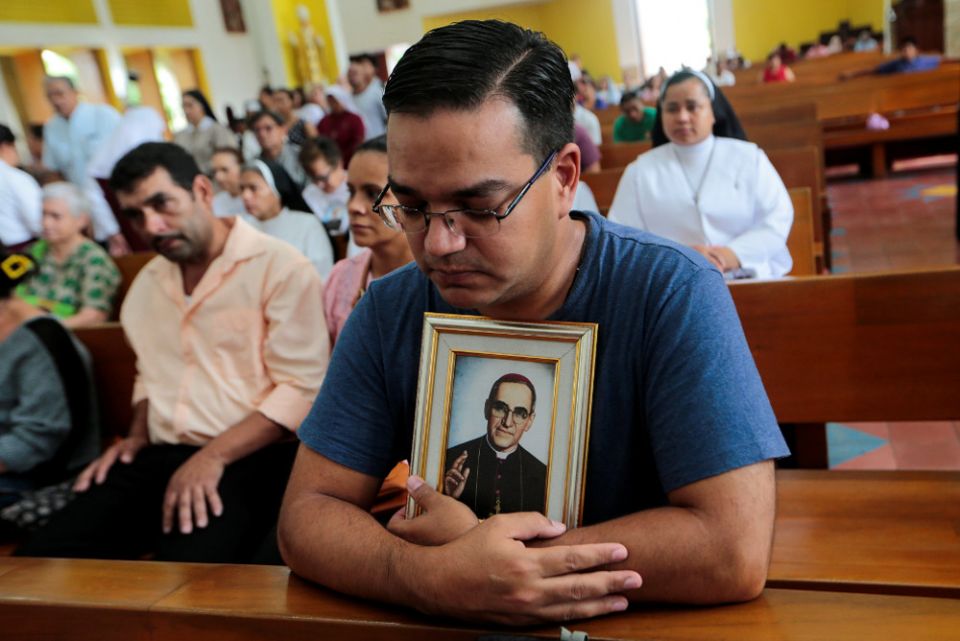 A man holding a portrait of St. Oscar Romero prays during an Oct. 13 Mass at the Metropolitan Cathedral in Managua, Nicaragua. (CNS/Reuters/Oswaldo Rivas)

The canonization Oct. 14 of the slain Salvadoran Archbishop Óscar Romero is an opportune time to reflect on the relationship between Christianity, politics and power.

Now an official saint of the Catholic Church, Romero was gunned down while celebrating Mass in 1980, the first bishop to be assassinated at the altar since Thomas Becket in the 12th century. The archbishop lived as a marked man, staring down death squads and a right-wing government supported by the United States, preaching a gospel of liberation to the poor and exploited in a place where wealthy oligarchs ruled for generations.

As paramilitary forces and the military slaughtered peasants, priests, nuns and social justice activists, Romero denounced the killings and became the conscience of his battered country. The bishop spoke truth to power and paid the price with his life.

At a time when President Donald Trump surrounds himself with fawning evangelical courtiers, and the religious right is riding high with the appointment of Brett Kavanaugh to the U.S. Supreme Court, what can Romero's life teach Christian leaders and their flocks today?

"Jesus was radical," Pope Francis said during a homily at Romero's canonization Mass, which reflected on the day's Gospel reading about a rich man who wanted to learn the path to salvation. "Sell what you have and give to the poor," Jesus tells him. It's not exactly the answer he wants to hear. Access to power and the accumulation of wealth are timeless temptations for humanity, but present particular challenges for Christians engaged in politics and public life. Too many politicians and leaders in our wealthy American churches sanitize the radicalism of Christ — a poor man who preached in the shadow of the Roman Empire — by drafting him into establishment agendas and using him as a prop to bless policies that hurt the most vulnerable.

Attorney General Jeff Sessions quoted Romans 13, a Biblical passage once used to defend slavery, as justification for inhumane government policies that are shattering immigrant families. Dallas mega-pastor Robert Jeffress has compared the president to the Old Testament figure of Nehemiah, who helped rebuild the city of Jerusalem. "God is not against building walls," Jeffress said. Liberty University President Jerry Falwell Jr. likens Trump to King David in the Bible, a flawed man God uses for greatness.

A new study of Protestant senior pastors found more than half approved of Trump. In the name of securing conservative appointments to the judiciary and animated by cultural backlash to an increasingly diverse society, many white Christians make their peace with a leader who demonizes immigrants, emboldens white supremacists, and stokes resentments for political gain. Cruelty and indifference are no longer disqualifying attributes for these voters. Asked by Lesley Stahl of 60 Minutes why he mocked Christine Blasey Ford, who claims that Kavanaugh sexually assaulted her when they were both teenagers, Trump responded: "It doesn't matter. We won."

Christians are called to keep hope. Perhaps those pastors who align themselves with a leader who makes an idol of power and demeans anyone who gets in his way will have a conversion. Romero started out as a conventional, even conservative bishop who did little to disturb the status quo.

As Paul Elie writes in the Atlantic, when first appointed bishop, Romero "shifted the content of the weekly archdiocesan newspaper from calls for social justice to calls for personal improvement, honing in on drug use, promiscuity, and alcoholism." He criticized Jesuit priests in the region for promoting "political theology."

If winning elections and holding on to power at all costs becomes the new orthodoxy, Christians trade away our most precious treasures at a cheap price.

After his friend and former seminarian colleague, Fr. Rutilio Grande, a Jesuit, was killed for organizing sugarcane workers, Romero had a transformation. He more forcefully challenged unjust political structures and used the archdiocese's radio station to take on the regime. This new stance made conservative bishops in El Salvador and Vatican officials, including Pope John Paul II, nervous. His canonization process moved along at a painfully sluggish pace over the past three decades. Some church leaders worried that Romero's assassination made him a political martyr, rather than a martyr of the faith, a flawed argument given the archbishop was killed for applying the Gospel in light of the social realities around him as the Second Vatican Council instructed, and was literally gunned down in the most sacred of spaces.

Romero's legacy challenges Christian leaders today to consider the costs of a transactional faith. If winning elections and holding on to power at all costs becomes the new orthodoxy, Christians trade away our most precious treasures at a cheap price. "A church that does not provoke any crisis, preach a Gospel that does not unsettle, or a word of God that does not touch the real sin of society, what kind of Gospel is that?" Romero once asked. It's an uncomfortable question more pastors need to be asking from their pulpits.

Commentary | Reflecting on the relationship between Christianity, politics and power

What good can come from the Trump administration?