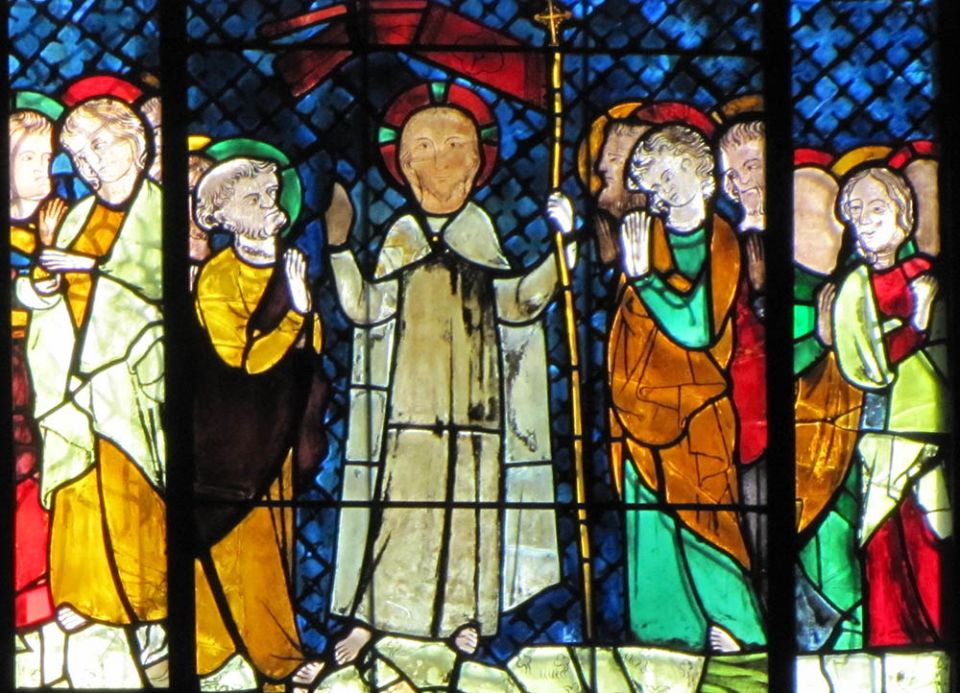 The risen Christ appears to his disciples, in this stained glass in the Notre Dame Cathedral of Strasbourg, France (Wikimedia Commons/Ralph Hammann)

Some parents sport bumper stickers announcing that their child is an A+ honor student at something like Ace Academy for the Brightest. Then there are the ironic moms who plant their tongue firmly in their cheeks as they shut the door on shouts about who left a mess in the bathroom and say sweetly, "My children? Why they never argue, and I have to get a magnifying glass to find a speck of dust in their rooms!"

The family I grew up in was much closer to the latter. We kids appreciated the value of a good argument and my poor neatnik mother suffered from the fact that she had been woefully unsuccessful in passing on her tidy-loving genes to any of us.

I suspect that today's first two readings speak from something closer to my family experience than to the super-performers. Luke may describe perfect sharing among the members of the first Christians and John tells us that our faith leads to love that is victorious over all that would weigh us down in the muck of the world, but other evidence indicates that both authors were more intent on encouraging their communities than bragging about them. They're holding up an ideal, not a mirror.

If their communities were as holy and perfect as Luke and John describe, Luke wouldn't have mentioned the cheaters, Ananias and Sapphira, and John wouldn't have critiqued people who claimed to love God and not their brothers. If the Easter disciples had done things really right, today's Gospel message about forgiveness would have been unnecessary.

Today's Gospel begins with an unflattering portrait of lost disciples. All they know is that Jesus' body is no longer where it was laid after being removed from the cross. The group is fractured and frightened. Mary of Magdala had told them that she had seen Christ risen, but they didn't believe her. Luke (24:11) revealed the depth of their doubt by admitting that the other disciples disparaged the women's Resurrection testimony as "nonsense."

Thus, our story opens with a group of former followers who decided to lock themselves into a safe place together.

Without an invitation, without even knocking, Jesus stood among them and blessed them with peace. Then, just to assure them of who he really was, he told them to look at his wounds.

John tells us, "They rejoiced when they saw the Lord." Picturing this scene challenges the most creative imagination.

The group had gathered in fear and sadness, and Jesus appeared among them, risen and still scarred. Joy? That's what John tells us. If so, theirs had to be a joy like they had never known before: a mind-blowing, earthshaking, confusing, beautiful, incomprehensible, embarrassed, terrifying, I-don't-know-what-tothink kind of giddiness that left them thoroughly off balance. What could Jesus say to that except "Peace"?

How was this group prepared to receive Jesus' peace? Their very lack of equilibrium was key. After the Crucifixion, pride and bravado, boasting and self-assurance had been wrung out of them as surely as night had fallen after Jesus breathed his last.

The Risen Lord who appeared to them was clearly the same Jesus who had preached, "Blessed are the poor, the meek, and the persecuted." Only now, in their own desolation, were these disciples in enough of a helpless, hopeless position to understand what he taught and receive what he offered.

John tells us that Jesus breathed on them and said, "Receive the Holy Spirit." With the breath of security knocked out of them, they were finally hollowed out enough to receive what only Jesus could give. Their experience of Jesus' passion had been their baptism by fire; only now, after the demise of their self-interested and power-seeking hopes, could they receive his life, his Spirit of believing, loving, trusting obedience and belonging to God.

Never before could they have understood the meaning of "As the Father has sent me, so I send you," because never before had they been so completely aware of the impotence of their own plans.

Jesus' last command commissions us to forgive. Forgiveness in family is a necessary expression of love. Forgiveness in society can engender radical social change. Forgiveness was the grace/power that allowed Jesus to transform crucifixion into redemption: He took in hatred, rejection and evil and returned nothing but love to the end.

To the extent that we receive Christ's Spirit and are willing to allow that grace/power to work through us, forgiveness will redeem the evil in our world.

The Resurrection stories illustrate that genuine disciples of Jesus are neither perfect nor perfectionists. We are simply called to be willing to recognize our own poverty and rely on the grace of the Spirit Jesus offers. The only thing we'll have to brag about is the transforming power of love.