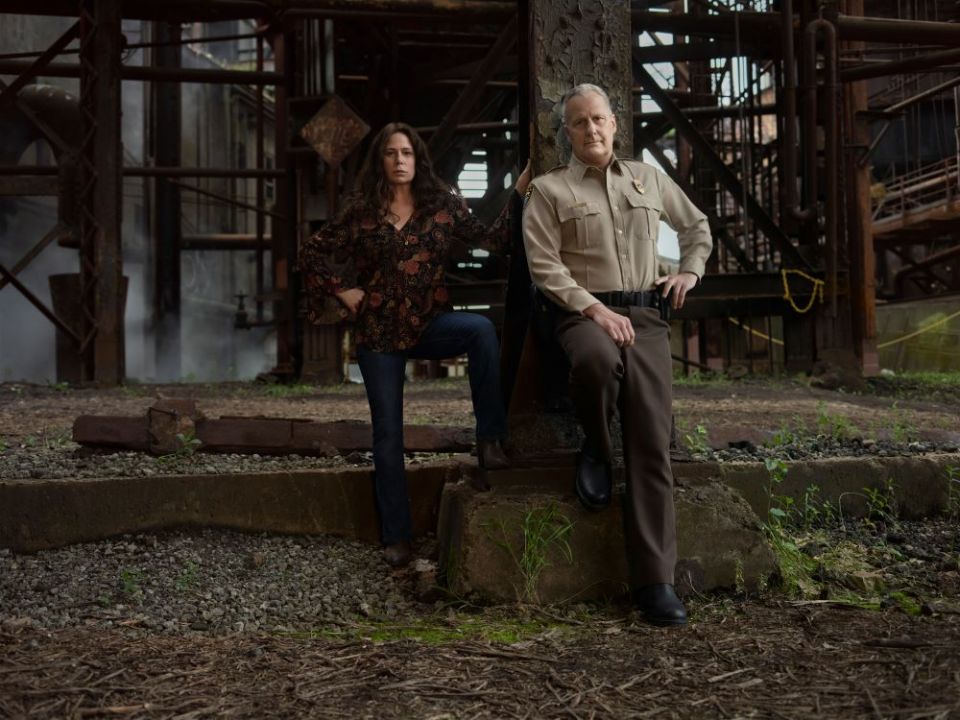 Maura Tierney and Jeff Daniels star in "American Rust," based on a 2009 novel of the same name and streaming on Showtime. (SHOWTIME/Matthias Clamer)

Fans of Philipp Meyer's acclaimed 2009 debut novel will puzzle over the alterations producers have made in their eponymous television series, which premiered Sept. 12 and currently streams on Showtime.

In the Monongahela River Valley, the fictitious town of Buell in Southwest Pennsylvania is the narrative's setting. Central to the drama and closed in 1987, the town's steel mill, to paraphrase the novelist, had been its heart. Once it shut, "half the people went on welfare and the other half went back to hunting and gathering," Meyer writes.

As the series begins, snapshots introduce viewers to most of the drama's chief players.

Slightly paunchy, 50-something Del measures opioids on a dealer's digital scale with a chemist's precision.

A photo of the sheriff with his brothers in arms signals he’s a Gulf War veteran. Also, a stint as a Pittsburgh detective ended badly. The trauma of these experiences compels him to lean on these substances.

Del is also having an affair with Grace Poe (Maura Tierney). After years working as a seamstress at Gelsey Dressmakers, Grace's arthritic hands make her feel and seem older than a woman in her 40s. On a break with her co-workers, she smokes a cigarette injected with caffeine and Listerine.

Her 20-year-old son and former star high school linebacker, who forswore a scholarship to play football at Colgate, Billy Poe (Alex Neustaedter) sits on the porch of the trailer he shares with his mom and sips a PBR tallboy.

"Everyone in the holler," says Judge Paronne (Guy Boyd) "is on one thing or another."

Still reeling from his Mexican American's mother's death five years earlier and feeling abandoned by his newly married sister Lee (Julia Mayorga), who escaped to Yale and now lives in New York, Isaac steals money from his dad and decides to start over on the West Coast.

On the day Billy’s six-month probation ends for his part in a bar fight, Isaac enlists him to join him on his journey. Approaching the forsaken mill, Billy sees Pete Novick (Jim True-Frost), the police officer who arrested him, walk into the mill, and the duo follow him.

Del later finds his former officer’s body and strong circumstantial evidence linking Billy to the murder. As he did when the erstwhile football star got into trouble, the sheriff does all he can to protect Billy.

Billy, concerned about the once suicidal Isaac, urges Lee, his former high school girlfriend, to return home. After Isaac catches the former pair romantically involved on the English family porch, he sets off alone on his planned road trip, leaving Lee to tend to their dad.

With only three episodes available to preview, it's difficult to gauge "American Rust's" ultimate value and appeal. The novel's readers will likely have a different take on the series than viewers who come to it without preconceptions.

Some changes appear directed at demographic groups. Inventing Isaac's crush on Billy seems calculated to center the LGBTQ community. Isaac and Lee also regularly converse in Spanish, emphasizing their pride in their Latino heritage, which is scarcely reflected in the book.

While the novel's most ardent fans probably won't quibble with these alterations, book lovers may fret over how the series portrays the murder.

Meyer immediately clues readers in: This is a random situation and self-defense factored into the killing. While the series producers strongly hint the murder was an act of revenge in the first three episodes, viewers are more or less in the dark about what happened.

Giving Del a more prominent place earlier in the story is fair. His actions are crucial to its resolution. But if the impact of the friendship between Billy and Isaac is diminished or lost as a consequence, the novel's fans should be upset.

What's lost in translation on the screen hinders Alvarez's performance as Isaac. His harrowing travels are the book's most compelling sections. Their power derives from exploring the character's interiority. Because viewers can't see thoughts, they don't fully appreciate how daunting Isaac’s travels are. Voiceovers would have helped create that effect.

All will wish "American Rust" would do more to pull you along and make you anticipate what comes next. But some good performances merit your attention.

Neustaedter's sensitive, thoughtful portrayal as Billy sets the right tone, and Tierney is authentic and believable as Grace. And Boyd, as the seen-it-all Paronne, well attuned to life's incongruities, memorably impresses in his limited time onscreen.

But, as is often true, Daniels is the chief reason to stay tuned to "American Rust." The easy, natural but considered way he embodies Del's words is marvelous to behold. All you can say is: This guy is really good. Faith in Flint: Catholic ministries band together to create hope