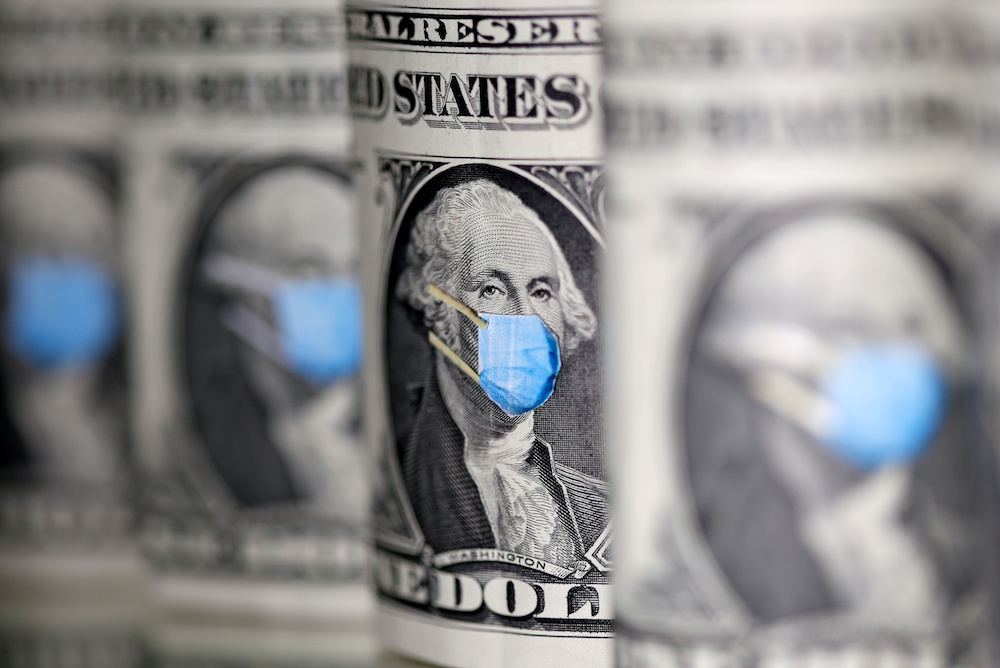 U.S. dollars are seen with face masks during the coronavirus pandemic in this illustration photo. Dioceses are helping parishes tap revenue streams while Masses are canceled because of the health crisis. (CNS/Reuters/Dado Ruvic)

Fundraisers are by nature an optimistic group. So says Joseph Gillmer, chair of the Catholic Development Council, an organization for Catholic stewardship professionals and a part of the Nonprofit Alliance. But as dioceses began to shut down in March in response to the pandemic epidemic, the church's top professionals in the field have been wracked by uncertainty.

Not having Masses was seen, at first, as terrifying, said Gillmer, particularly in parishes where offertory collections are a major source of income.

"What will unemployment mean?" they asked about the millions of Catholics no longer with a breadwinner, Gillmer told NCR, describing the questions raised during social media roundtables sponsored by the group. And the news in many quarters has not been good: dioceses, who often rely on parish income for their revenue, have instituted cutbacks in Oakland, California; Pittsburgh and Phoenix, among other places.

The numbers are not in, as parishes have yet to file their quarterly reports, but Gillmer said that diocesan development directors and fundraisers for other Catholic organizations still see reasons for optimism.

"The sense of uncertainty has been replaced by strategic planning," said Gillmer.

He said that while many Catholic donors are undergoing financial difficulties, others are financially stable and, like a lot of other people, have free time in this pandemic.

"We're all sitting at home and they feel like there's nothing we can do to help," he said. Fundraisers are finding that that there is a renewed openness to church needs.

Parishes have responded to the end of traditional offertory collections with a renewed focus on online giving, often driven by social-media Masses attended long-distance by parishioners. Old-fashioned direct-mail appeals have also proven successful, said Gillmer. Other parishes have adopted online crowdfunding models of giving, like Go Fund Me, as parishioners can see results online in real time.

There has been a renewed effort among church fundraisers directed at supporting the parish, the bulwark of Catholic life.

"Everyone had the same idea: We need to support the parishes and we need to support it now," he said about the response of diocesan development directors as the church went into lockdown in March.

Parishes have also been assisted by the Paycheck Protection Program passed by Congress, which allowed for nonprofits and religiously-affiliated groups to apply for loans to keep people on their payrolls, which can later be turned into grants. Rules that formerly put limits at 500 employees counting affiliated groups — a problem for Catholic parishes associated with dioceses — were relaxed.

"It's been a big help," said Gillmer.

While Gillmer sees reason for financial optimism as the church emerges from the pandemic, Charles Zech sees trouble ahead.

Zech, professor emeritus of church management at Villanova University, told NCR that there is widespread concern over the lack of offertory collections, even in this age of electronic giving.

"Sunday collections are all hurting," he said, noting reports he hears that indicate collections are at best half of what they used to be in most parishes and only a third in others. The difference in results is in large part due to the extent that parishes developed the habit of online giving before the pandemic struck.

There are also regional differences, he said. Churches in New York City, in particular, are struggling as the pandemic hits that area particularly hard. And as parishes slowly return to a new normal of openings, some nominal Catholics may not return to Mass, depressing routine offertory collections even further.

Parishes will also face other difficulties imposed by social distancing. Churches will not be allowed to be crowded; that could mean needing more Masses with smaller congregations for each, taxing overburdened parish priests.

Zech expects there will be a renewed emphasis on pledging to raise parish funds as concern over offertory collections grow. He thinks parishes will ask members to promise to pay a certain amount over a year's time rather than rely on ad hoc offertory donations. He also sees that parishes that before the pandemic were operating on the financial edges are likely to be closed or merged, particularly as there will be less money for dioceses to fill in the gaps. Older Catholic cities, such as Chicago, Boston and Philadelphia, are likely to experience more parish closings and consolidations, said Zech.

While Zech expressed these concerns, he also said there have been positive developments out of the crisis. Parishes have learned the technology of online liturgies and meetings, a trend that will continue after the pandemic. Parishes have also learned the value of online giving, which will surely be emphasized as churches reopen.

Gillmer sees a similar pattern. In one large archdiocese, he noted, 20 parishes have added online giving programs in response to the pandemic. And, anecdotally, he's been told that while many Catholics hard hit by the crisis have pulled back on giving, others have emerged to give more as the church emerges into a new normal.