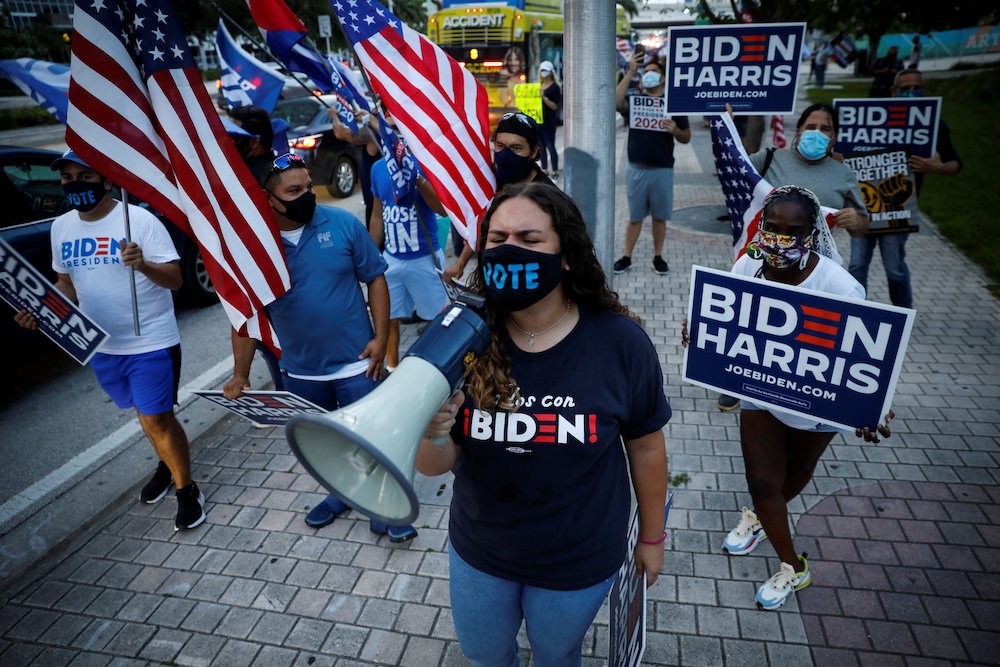 A television ad for Joe Biden playing on Spanish-language television presents a montage of photos. They tell a story in images from Biden's days as a young senator to today's 77-year-old nominee. Included is a photo of the Irish Catholic politician famous for carrying a rosary being anointed by a cleric, his head bowed in prayer. Soon the scene moves to a photo of Donald Trump, a sporadic churchgoer, awkwardly holding a Bible outside St. John's Episcopal Church across from the White House after ordering the dispersal of protesters to make way for a photo op June 1.

The message for Latino voters: Biden may be an Irish Catholic from largely-Anglo Scranton, Pennsylvania, but he shares your faith understanding. Trump doesn't.

Frank Orlando, director of polling at St. Leo University near Tampa, told NCR that it may well be religiosity and church moral teachings, not national identity, that will play the largest part in garnering the pivotal Latino vote in the pivotal state this year.

In Florida, the Hispanic mix includes Cuban Americans; Venezuelans hit with scarcity and chaos at home; Puerto Ricans who left their island after a string of natural disasters; and newcomers such as Central Americans fleeing poverty and violence. But those national identities often obscure other factors that influence voting.

"It's part of our culture and our identity," she told NCR.

Peláez told NCR that the response of Florida Latino voters is complex. While many remain strongly anti-abortion, "none of us live a single-issue life."

Politicians this year have focused on two groups: Puerto Ricans, who are U.S. citizens and eligible to vote once they establish a mainland residence, and Cubans, who have deep roots in the U.S.

A Miami Herald poll released in early September sent shudders through Democratic circles. It showed that, as usual, Florida was tightly contested, and that Biden has made inroads among older, white voters. But Democrats were shocked to discover that Biden was trailing Hillary Clinton's 2016 performance among Latinos, when Clinton lost Florida and the national election. While Florida was rated a tossup, Trump was said to be surpassing previous Republican presidential contenders among Latinos. 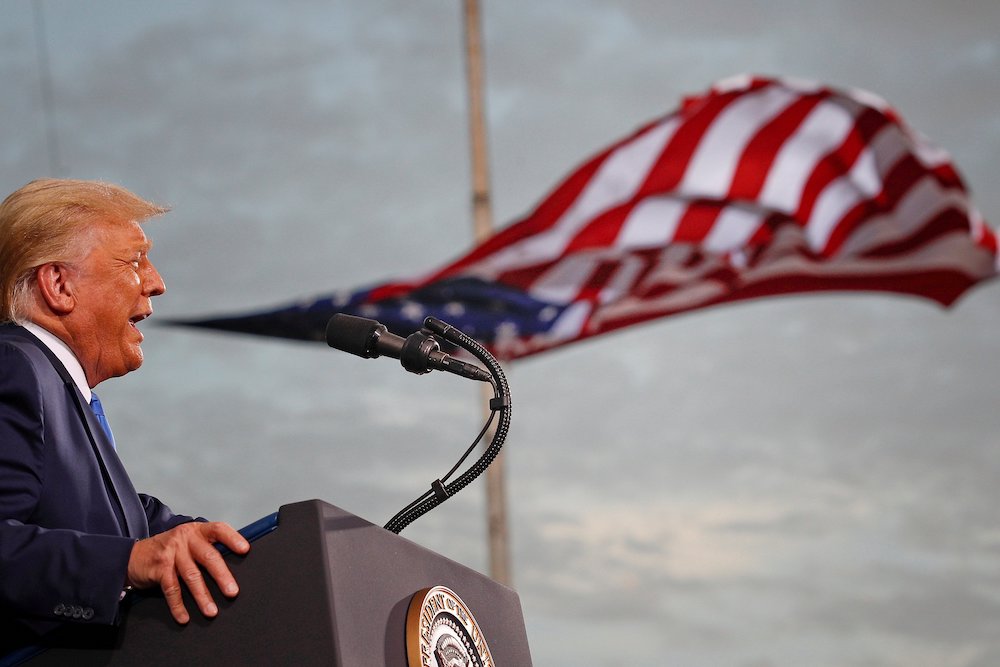 The Trump campaign has targeted Latino voters in Florida, hoping that they can cut into what has been seen as a Democratic strength. In February, Trump appeared in Miami, and much of the crowd consisted not of the older, white voters that come out for "Make America Great Again" rallies in the Midwest, but Latinos from evangelical churches, a bastion of Republican strength.

The Biden campaign has stepped up its efforts since the August poll. They formed Creyentes con Biden ("Believers for Biden") to rally Christian Latinos to the Democratic ticket, including evangelical and Catholic leaders.

Yanira Merino, president of the Labor Council for Latin American Advancement, told NCR that Florida has always been complicated.

"Florida has always been a challenge [for Democrats]," she said. This year, even more so. She told NCR that Latinos are facing many of the issues affecting the wider community, including COVID-19, which has directly affected Latinos more than whites and other minorities.

Peláez is the daughter of Cuban emigres and an expert on Cuban cuisine who has written extensively on that topic. Her parents were among those who fled the island and the Fidel Castro regime.

The anti-communist fervor among many Cubans had placed them firmly in the Republican camp in the U.S., but younger, more established Cuban Americans are now more likely to vote Democrat, said Peláez. Many more traditional Cuban Americans react negatively to socialist labels, at the same time they are dependent upon programs such as the Affordable Care Act. Venezuelans in south Florida often express similar sentiments against socialism, she said.

"We have to see people as complex. There are a lot of conflicting motives," she said, an insight reinforced by the Miami Freedom Project regular get-togethers among southern Florida Latino voters. There, often over ethnic dishes, the project tries to encourage discussion on political and social justice issues among South Florida voters.

Biden's Catholicism is a plus. Latino voters connect with his overt Catholic piety, and his discussion of how faith has played a role in overcoming personal tragedies, including the deaths of his children and first wife, according to Peláez, of the Miami Freedom Project. "That has always connected with me as a Catholic," she said.

Cuban Americans, she said, have never been a monolith. Their attitudes toward their home country differ. As a young girl, she watched as Miami protestors demonstrated against an art exhibit at a local museum featuring the work of her aunt, Amelia Peláez del Casal. Because her aunt remained in Cuba after the revolution, she was considered suspect, a part of the regime, even though her family included a political prisoner who spent decades in a Castro jail.

Miami Latinos remained connected to events in their home country. Peláez embraces the description of the city as the Latin American capital. It undergoes regular changes, as groups, including Cubans, Venezuelans and Argentinians, flee to South Florida when life in their home countries become unbearable.

"We have the immediate impacts of anything happening in Latin America," she said, noting that is now particularly true of Venezuelans. "You feel these population shifts in real time."

"New York is New York no matter who comes. Miami is more mutable, it contains these different shapes," said Peláez, who once lived in New York.

Orlando says that Democrats need to try a different tack to reach reluctant Florida Latinos. Outrage against Trump immigration statements and policies, or equating the Black Lives Matter protests with Latinos, will not persuade reluctant Latinos who lean Republican. "In some ways, white voters are more offended by this stuff," he said about Trump's often controversial remarks.

"A lot of Hispanic voters don't consider themselves as people of color," he said, with many viewing their immigrant experience as vastly different from those of Black Americans. While Latinos are now the nation's largest minority, they still comprise a much smaller part of the electorate. Black Americans traditionally vote in larger numbers.

Trump's anti-abortion policies retains support among his Latino evangelical and Catholic base, said Orlando. Biden has not been helped among that group by his transition from young pro-life senator to his pledges to maintain Roe v. Wade and public funding for abortions.

The president's personal address at this year's Right to Life March, a largely symbolic gesture, has made an impact among such voters, he said.

His colleague at St. Leo's, theology professor Stephen Okey, told NCR that Latino evangelicals are willing to support the president, even while cognizant of his largely irreligious background and his pre-presidency reputation as a New York playboy. They see him through a biblical lens: some as King David, also guilty of sexual sins, who was used by God. Others see him as comparable to Cyrus, the pagan Persian king who liberated the Hebrews.

"They will use that kind of language to talk about President Trump," said Okey.

Biden, said Orlando, might be able to more effectively persuade older white voters in Florida, such as those who live in The Villages, a giant retirement community.

"They can recognize Joe Biden as an older established Democrat from the places they moved from," he told NCR. "Appeals to identity might work better with white Catholic voters who are less interested in church teaching."

What won't work, he emphasized, is what he described as "a tired trope" that Cuban Americans will vote Republican, while Puerto Ricans are safely in the Democratic camp. Both groups include many who defy the stereotype. Whether religious-minded Latinos will accept Biden's personal identification with them or Trump's transactional anti-abortion alliance will be determined in November.

Read this next: They may not vote as a bloc, but Latinos still can influence the election
This story appears in the Election 2020 feature series. View the full series.
A version of this story appeared in the Oct 16-29, 2020 print issue under the headline: Latino vote in Florida may hinge on faith.