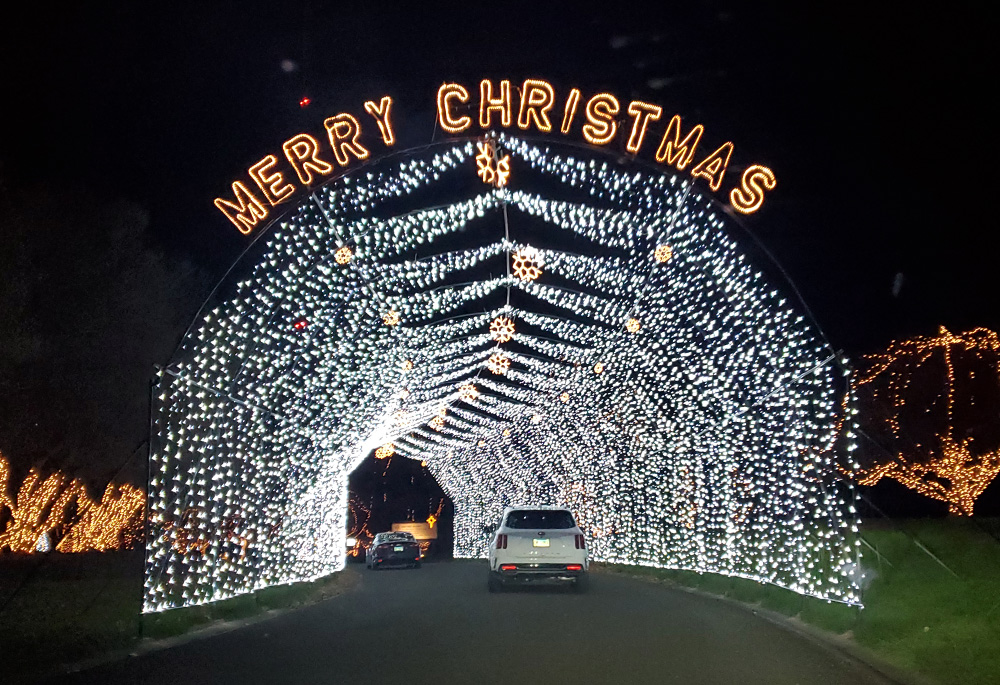 Each year, more than 1.5 million Christmas lights are strung for the Way of Lights display at the National Shrine of Our Lady of the Snows, in Belleville, Illinois. (NCR/Brian Roewe)

In the middle of America, a Catholic shrine lights up each Christmas.

No, not with candles, though there are plenty of those, too. Instead, more than 1 million bulbs on thousands of strings of Christmas lights transform the National Shrine of Our Lady of the Snows, in southern Illinois, into the Way of Lights, transporting tens of thousands of visitors each year for more than half a century back to biblical days in a Christmas display like few others in the country.

For starters, you won't find Santa or scenes from his workshop at the Way of Lights.

"We're really looking at this from a religious, spiritual perspective. This is a celebration of our Advent season and most especially our Christmas season," said Oblate Fr. David Uribe, director of Our Lady of the Snows.

"[It's] the story of the reason for the season, and that's Jesus being born," he added.

Attracting people from across southern Illinois and the St. Louis metro region, the Way of Lights, which this year runs from Nov. 19 to Dec. 31, winds visitors in their vehicles along the illuminated roads of the shrine's 200 acres. Throughout the grounds, lights outline tree trunks and branches, and bright white strands turn lampposts flanking the path into conical Christmas trees. But patrons first enter through a tunnel of light, this year outfitted with new, and brighter, LED lights.

The tunnel almost acts like a time warp, beginning a journey that takes visitors back to Bethlehem as the Missionary Oblates have recreated the Nativity story through strands of more than 1.5 million multi-colored Christmas lights. Signs along the way recount Gospel passages of the forthcoming birth of Jesus. Illuminated displays and creations depict shepherds, sheep, donkeys, Magi and angels, all on their own journey to a manger. There's even a couple camels that kids can ride in a corral area. 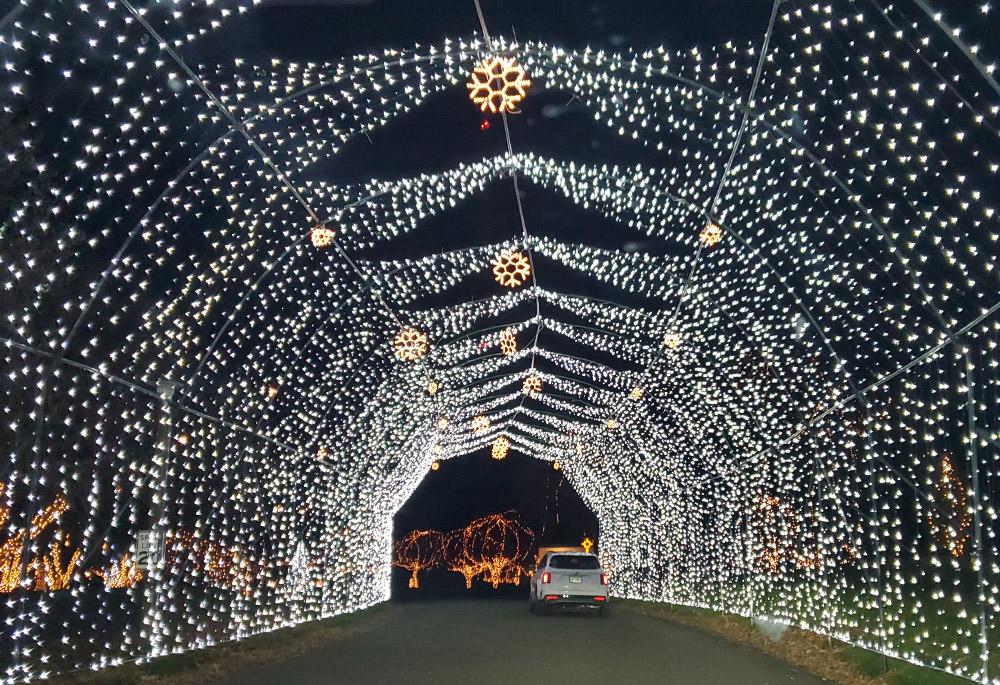 A "tunnel of light" greets visitors to the Way of Lights display at the National Shrine of Our Lady of the Snows, in Belleville, Illinois. In 2021, workers installed new LED lights to the tunnel. (NCR/Brian Roewe)

The Way of Lights culminates as the line of cars slowly descends a gradually sloping hill and enters the bright-lit gates of Bethlehem. Toward the end, a simple spotlight shines on a crèche scene inside Lourdes Grotto, a cave-like opening carved into a bluff, where statues of Mary, Joseph and Jesus recall the manger in Bethlehem during the Advent and Christmas seasons.

"That's where we really accumulate everything that we're trying to do with the Way of Lights, with what our mission here is at the shrine to bring about God's healing and peace … especially with Christmas," Uribe said.

Lourdes Grotto was the first development on the property when the Missionary Oblates of Mary Immaculate broke ground on Our Lady of the Snows Shrine in 1958 on what was once hilltop farmland within view of the Mississippi River. Founded in France in 1816, the Missionary Oblates serve poor communities around the world, with its 4,000 priests and brothers working in some of the neediest locales — from supporting miners in Bolivia, to working with AIDS patients in Zambia, to assisting child refugees in Haiti.

The name of the shrine the Oblates built in Belleville derives from a devotion to Mary that dates back to a fourth-century legend that said the mother of Jesus told a wealthy Roman couple it would snow on the site for a church to be built in her honor. Today, that church is the Basilica of St. Mary Major, on Esquiline Hill. 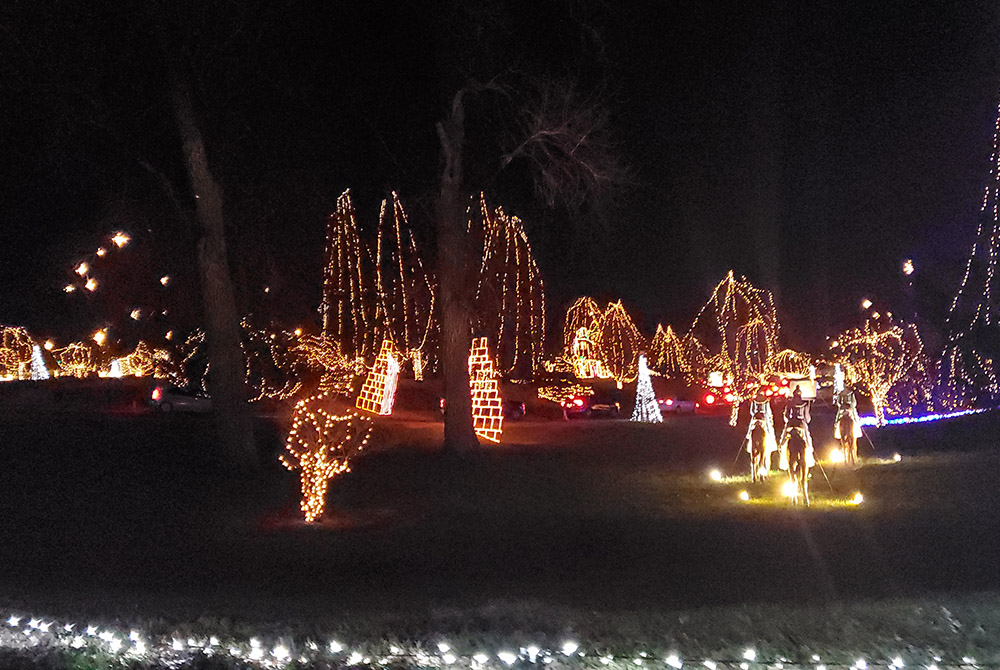 Gold-and-pink gates depict entry into Bethlehem at the Way of Lights at the National Shrine of Our Lady of the Snows, in Belleville, Illinois. The annual Christmas light display recreates scenes from the biblical story of Jesus' birth, including the arrival of the Magi. (NCR/Brian Roewe)

The story of how the first lights were strung at Our Lady of the Snows was less divinely inspired, but instead a proposal in the self-interest of its grounds crew. As the winter months arrived, work on landscaping and building maintenance became scant, and several of the maintenance workers suggested hanging Christmas lights as a way to keep them employed. The Oblates agreed, and the first strands lit up what's known as "Grotto Lane" that leads past Lourdes Grotto.

During the 2020 season, a total of 47,300 vehicles — many filled with multiple passengers — drove through the Way of Lights.

Uribe told NCR he couldn't point to a single moment where the popularity of the Way of Lights surged, but rather it simply built over time as families came to make it part of their Christmas rituals.

"Over the years this has become a family tradition," he said. 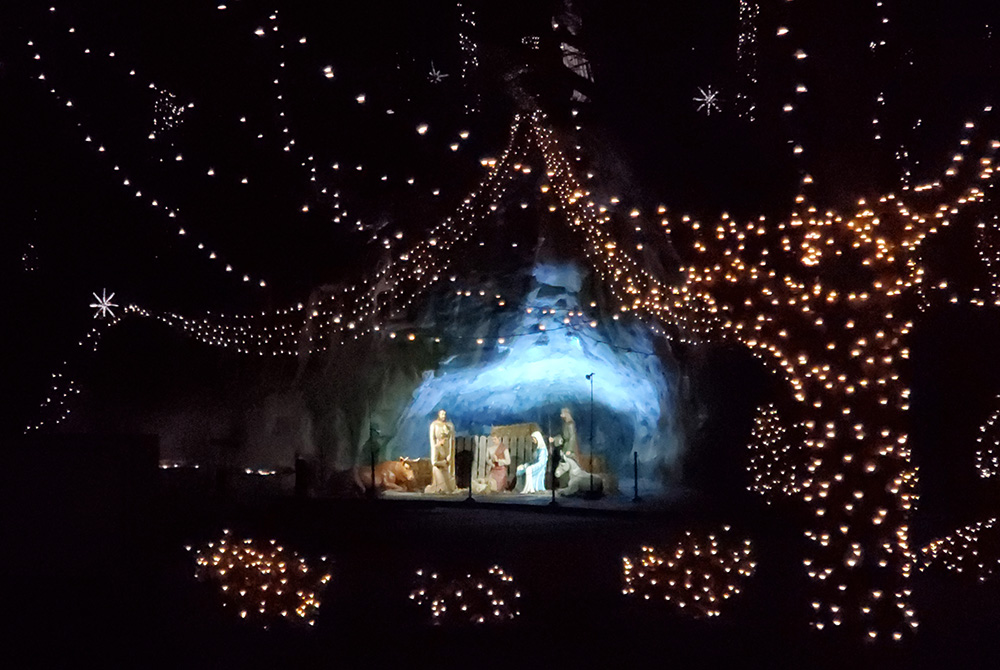 A Nativity scene is created inside Lourdes Grotto as part of the annual Way of Lights Christmas display at the National Shrine of Our Lady of the Snows, in Belleville, Illinois. (NCR/Brian Roewe)

In 2019, the Shrine celebrated 50 years of the Way of Lights. That anniversary brought out many stories from families who have enjoyed the display for years, including the crew of "first-nighters" who always visit on the first day the shine flips on the lights.

Uribe said that along with traditions, the fact that the Way of Lights has always been free is another reason for its popularity, drawing long, but well-paced lines of cars in both directions from Illinois and Missouri. A booth at the end collects donations, and the majority of people make a contribution, Uribe said.

The Way of Lights serves as a fundraiser for Our Lady of the Snows and supplements its annual budget for its various ministries and programs through the winter and spring months.

Like many Catholic parishes and institutions, those all took a major hit in the past two years since the outbreak of the COVID-19 pandemic. State-issued lockdown orders ground activity at the shrine to a halt, with retreats and conferences canceled and its banquet and restaurant shut down. Like others, they turned to livestreaming Masses online, and donations helped the Missionary Oblates keep their employees on the payroll.

While other programs were put on hold, the Way of Lights continued. And people seemed pleased that it had. 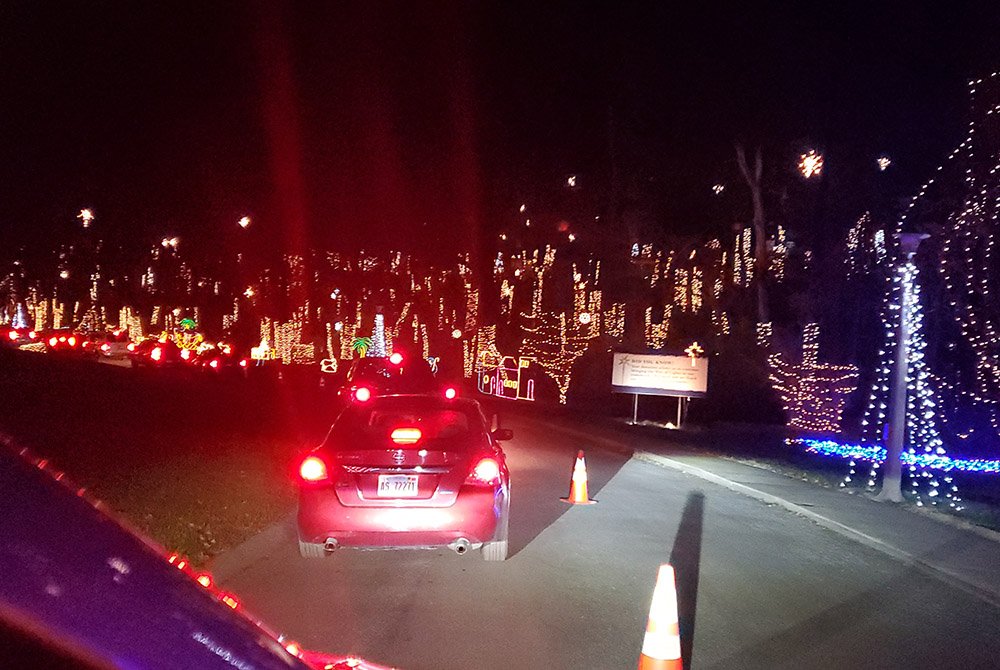 In 2020, more than 47,000 vehicles passed through the Way of Lights at the National Shrine of Our Lady of the Snows, in Belleville, Illinois. The COVID-19 pandemic has resulted in higher attendance rates during both the 2020 and 2021 seasons. (NCR/Brian Roewe)

As families sought out safe and socially distanced activities during the pandemic, the 2020 season turned into one of the largest in recent years. And as of Dec. 13, the 2021 season had already drawn more than 8,100 vehicles, which was well ahead of the two most recent non-pandemic years.

Other Christmas light displays on Catholic grounds have emerged across the country.

The Immaculate Heart of Mary Shrine, in nearby Carthage, Missouri, since 1984 has told stories from the Old and New Testaments in its "The Way of Salvation Driving Christmas Lights Tour." The National Shrine of Our Lady of La Salette, in Attleboro, Massachusetts, holds an annual festival of lights. San Pablo Catholic Church in the Florida Keys has been adorning Christmas lights at its parish for two decades, and more and more churches have begun projecting seasonal imagery on their buildings.

Uribe said he regularly receives calls from other Catholic institutions interested in creating their own Christmas light displays.

As for Our Lady of the Snows, the Way of Lights keeps growing.

A few more lights are added each year, and as old strands burn out, they're replaced with new LED versions. In 2022, the shrine hopes to install a solar array that will help offset the cost of the lights and lower its overall energy bill and generate electricity back to the grid.

In 2010, it began hosting a Way of Lights Run after New Year's Day to give patrons a new way to experience the light display, on foot rather than in a car. And they've also partnered with a local company to offer carriage rides. Local organizations and businesses also sponsor a Christmas tree display in their visitors center.

Along with retelling the story of Jesus' birth and celebrating the Christmas season, the Way of Lights can also become a time of reflection, Uribe said, in the "nighttime of the year" as days become shorter in November and December.