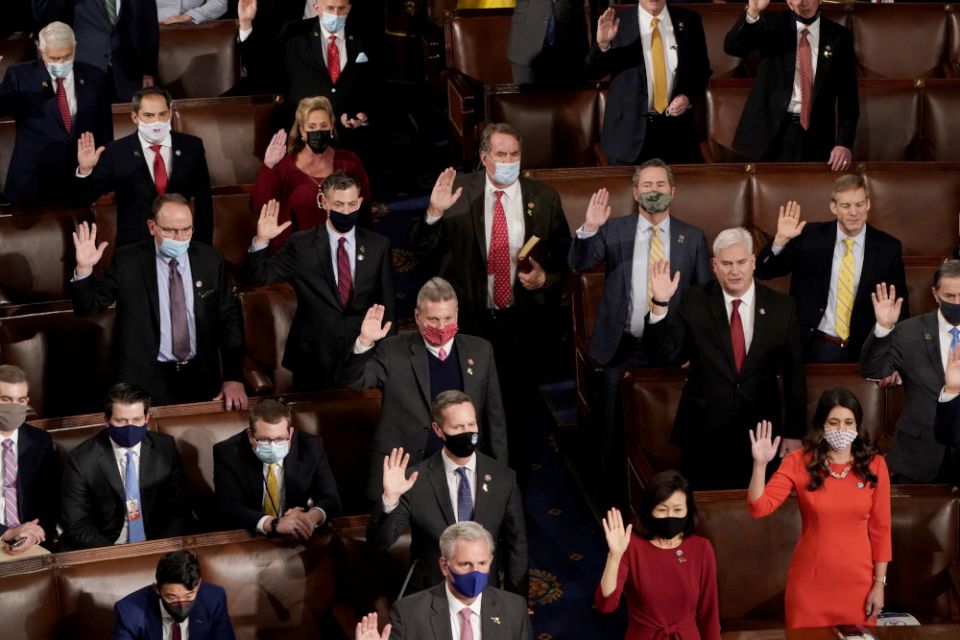 Republican members of the U.S. House of Representatives take their oath of office on the floor of the House Chamber during the first session of the 117th Congress on Capitol Hill in Washington Jan. 3, 2021. (CNS/Reuters/Joshua Roberts)

The 117th session of Congress got off to a testy start on Jan. 3, including an opening prayer from an ordained member whose pairing of "A-woman" with the traditional "Amen" raised both hackles and questions about the meaning of the word.

But what is rarely at question is the religious composition of Congress, as the House and Senate remained overwhelmingly Christian (88%), and heavily Protestant (55%), the Pew Research Center has found.

A total of 294 House and Senate members are Protestant Christians, out of a possible 535 — nearly the same as the last Congress.

Like the previous Congress, too, the 117th Congress is also unlike America as a whole when it comes to faith allegiances.

Whereas about a quarter (26%) of U.S. adults are religiously unaffiliated — describing themselves as atheist, agnostic or having no particular religion — Sen. Kyrsten Sinema, a Democrat from Arizona, was the only member of Congress to identify as religiously unaffiliated. Rep. Jared Huffman, a California Democrat, describes himself as a humanist. Both Sinema and Huffman have said they do not consider themselves atheists.

Eighteen others declined to specify a religious affiliation. 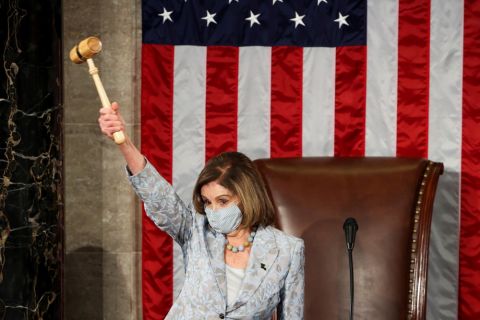 U.S. House Speaker Nancy Pelosi, D-Calif., waves a gavel during the first session of the 117th Congress in the House Chamber at the U.S. Capitol in Washington Jan. 3, 2021. (CNS/Pool via Reuters/Tasos Katopodis)

"Is it disappointing that there's this much underrepresentation of non-religious voices in Congress?" asked Hemant Mehta, an atheist writer and podcaster. "Yes. It's deeply depressing."

But he noted he was encouraged that four of the 18 who declined to specify a religious affiliation are part of the Congressional Freethought Caucus, a group established in April 2018 to foster science and reason.

Pew found a growing number of congressional members do not identify with a particular denomination, such as Methodist, Lutheran or Presbyterian. There were 96 members of Congress who said they were simply Christian or Protestant. By contrast, in 2009, during the 111th Congress, only 39 members described themselves this way.

The Pew analysis relied on CQ Roll Call data on the religious affiliations of members of Congress.

Pentecostals were underrepresented. They make up 0.4% of Congress vs. 5% of all U.S. adults.

Rep. Emanuel Cleaver II, a Democrat from Missouri, delivered the opening prayer for the 117th Congress, riffing on the priestly blessing from the biblical Book of Numbers.

He caused a Twitter-storm when he closed his prayer in the name of "God known by many names by many different faiths — amen and a-woman."

That closing drew the ire of some conservative pundits. The president's son, Donald Trump Jr., tweeted that the use of "a-women" was "insane."

"Amen means 'So Be It' in Latin. It isn't a gendered word, but that didn't stop them from being insane," he tweeted.

("Amen," a word "used to express solemn ratification," according to the Merriam-Webster Dictionary, comes to English from Hebrew. It has no etymological connection to the English word "man." It is most likely connected to the Hebrew word for faith, emunah.)

Others have pointed out that kind of wordplay is common in many religious traditions and that Cleaver, who earned a master of divinity from St. Paul's School of Theology of Kansas City, likely knows the meaning of the word "amen."