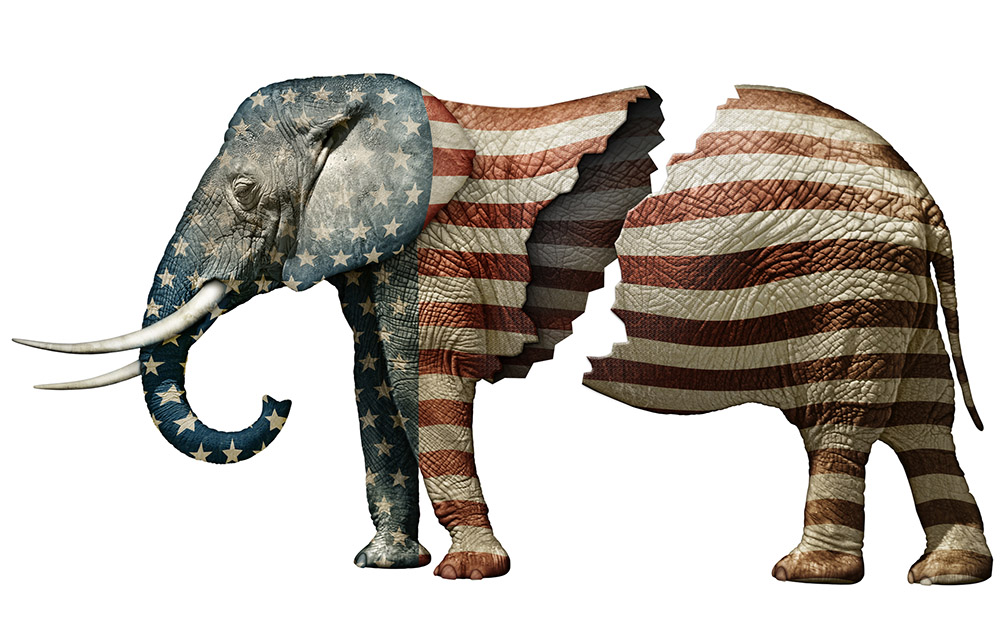 This week, a great deal of attention will be focused on President Joe Biden's inability to get voting rights legislation through the Senate. Talking heads will discuss the divisions within the Democratic Party — and those divisions are real and substantive to be sure — and how the lack of a united front dims the party's already bad odds in November's midterms. Doom and gloom on the left will be the refrain.

I am equally interested in the emergence of fissures in the Republican Party. With the anniversary of Jan. 6, we were reminded that even after members of Congress had to flee their chamber in fear for their lives that day, when they returned to the business of certifying the election results that night, eight senators and 139 representatives voted to decertify the election results from either Arizona or Pennsylvania or both.

In the weeks after that assault on democracy, House Republican Leader Kevin McCarthy, who had admitted President Donald Trump's moral responsibility for the riot that day, nonetheless trekked to Mar-a-Lago to kiss the would-be autocrat's ring. In the summer, when Reps. Liz Cheney and Adam Kinzinger joined the select committee investigating the events of Jan. 6, other Republicans called for them to be punished.

Before our eyes, the GOP was showing it could not escape Trump, that it was no longer so much a political party as a personality cult.

Even if the better angels of our nature cannot be counted on to save us from ourselves, sometimes the lesser angels do their part as well.

The prospect of one of our two political parties growing indifferent to democracy itself was scary in the extreme but, alas, even if the better angels of our nature cannot be counted on to save us from ourselves, sometimes the lesser angels do their part as well. It is becoming obvious that some in the Republican Party think Trump's continued obsession with claims he really won the 2020 election are not helping them connect with voters more concerned about inflation, COVID-19 and immigration. In other cases, ambition sees in Trump an obstacle, not a blessing.

The former president's rally in Arizona over the weekend demonstrated some of those tensions. In addition to the QAnon fanatics in the crowd, the stage was peopled with some, ahem, irregular candidates, such as Kari Lake, a former news anchor who now traffics in misinformation about COVID-19 and started spreading charges of election fraud without any evidence to support them after the 2018 midterms. Talk about getting ahead of the field! She was one of the speakers in advance of the former president.

Rep. Paul Gosar, recently censured by his House colleagues for posting an animated video that showed him attacking Biden and killing U.S. Rep. Alexandria Ocasio-Cortez, was another speaker at the rally. He also repeated the thoroughly debunked canard that the 2020 election was stolen.

And what gathering of Trumpian whackadoodles would be complete without My Pillow CEO Mike Lindell. He not only agreed that the election was stolen from Trump, but promised it would be corrected in "God's time." Fortunately, I have it on good authority (Matthew 24:36) that "no one knows about that day or hour, not even the angels in heaven."

Can't imagine why GOP strategists might be worried that these charming characters are the face of the GOP.

Not all Trump's resentments are focused on the fact that he lost his bid for reelection. Onetime acolyte Florida Gov. Ron DeSantis has reportedly earned Trump's ire as well. Here the problem is that DeSantis has been unwilling to say he will step aside if Trump seeks the presidential nomination in 2024.

While it is tempting to welcome any Republican who refuses to worship the golden calf that is Trumpism, in the case of DeSantis it is impossible. The governor may not be willing to step aside in furtherance of his political ambitions, but he is all too willing to step over the bodies of Floridians who will die from COVID because he has confronted the virus not as a public health threat but as a threat to his libertarian ideology.

He announced his state would refuse to enforce the vaccine mandate for health care workers that the U.S. Supreme Court upheld last week. Earlier, he pushed for and signed into law a ban on private employers enforcing a vaccine mandate. If DeSantis wins the GOP nomination, he should make omicron his running mate.

The tug of war between DeSantis and Trump took a new twist over the weekend, when Trump aides blamed Sen. Mitch McConnnell for causing tension between the Florida governor and his most famous resident. The former reality-TV star is morphing into a soap opera star before our very eyes!

The differences between the divides within the Democratic Party and those within the Republican Party are significant, and worthy of a future column all their own. But one thing needs to be said now. The GOP is playing with fire, because if they allow the extremists to dominate their primaries, you will not end up with strong candidates, you will end up with Trumpian sycophants. It should not be too hard for a Democratic opponent to cause mischief between the thin-skinned former president and those candidates whose raison d'être is fealty to the leader.

I get as frustrated as the next leftist with the stubbornness of Sens. Joe Manchin and Kyrsten Sinema, but I would rather face the divisions the Democrats have than those that plague the Republicans. The GOP primaries may become a referendum on the question: Are we a party or a cult? Politically, there is no great answer to that.