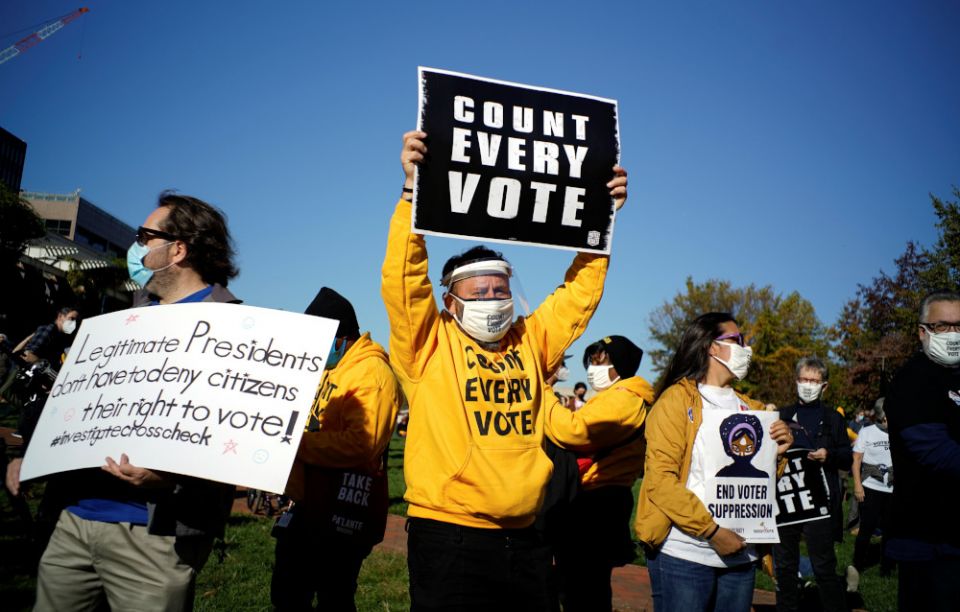 People in Philadelphia take part in a rally demanding a fair count of the presidential election votes Nov. 4, 2020. (CNS/Reuters/Eduardo Munoz)

Nearly 2,000 nuns have signed a letter addressed to President Donald Trump suggesting he abandon calls to halt vote tallies in various states and instead "count the votes."

The letter accuses "some elected officials" of making "the immoral choice to hold onto power at any cost, including disenfranchising thousands, denying their most sacred gift: their voice."

"We took vows as Catholic Sisters, and you took a vow to uphold the Constitution," the letter to Trump reads. "Stay true to your vow. Count the votes."

My thoughts this morning: It is frustrating that we do not know immediately who won our Presidential election. Nonetheless, democracy is worth the hard work and the wait. We must insist that our democracy can and does work when we #CountEveryVote.

We the People will make it so. pic.twitter.com/smM7aLkHIA

The more than 1,950 Catholic nun signatories hail from across the country, including states where the Trump campaign has called for recounts or is suing to stop vote counts, such as Arizona, Georgia, Pennsylvania, Wisconsin and Michigan.

"Donald Trump's reckless attempts to disenfranchise millions of people across the country struggling during this pandemic is shameful and will not be tolerated," Sister Simone Campbell, head of the Catholic social justice lobby Network that helped organize the letter, told Religion News Service in a statement.

"It may be frustrating that we do not know immediately who won our 2020 Presidential election. Nonetheless, democracy is worth the hard work and the wait. We must insist that our democracy can and does work. We will give the vote counting the time needed to ensure that we accurately count every vote."

The letter comes on the heels of similar letters signed by 420 Catholic sisters and their allies in the swing states of Michigan, Pennsylvania and Wisconsin. The letters, addressed to secretaries of state, also implored officials to count all the votes.

A "Nuns and Nones" coalition — a partnership of Catholic sisters and religiously unaffiliated people — also visited polling locations across the country on Tuesday, handing out candy and helping to raise spirits.

The nuns are one of many faith groups who are calling for states to count all the votes, despite premature declarations of victory by the president and allegations that officials are "stealing" the vote by counting ballots. Many religious leaders have been preparing their congregations for the possibility of a prolonged vote-tallying process for weeks, and more than 1,000 clergy members, religious scholars and other faith-based advocates singed a statement last week titled "Faith Leaders United to Support Free and Fair Elections."

Local clergy in Pennsylvania have also sent letters insisting elected officials back the proper tabulation of votes, and rabbis have participated in "count the votes" demonstrations in New York City.

Glad to be out here with a big group of NYers, including @JFREJNYC to demand that every vote be counted.

Also finally got my @truahrabbis mask!

Nuns were a regular fixture of the 2020 campaign season, with each candidate highlighting the support of Catholic sisters. Both party conventions featured appearances by nuns, with Campbell, of Sisters of Social Service, praying at the Democratic National Convention and Sister Deirdre Byrne, of the Little Workers of the Sacred Hearts of Jesus and Mary, speaking at the Republican gathering.

Nuns also made an appearance at some of Trump's final campaign rallies, including a trio of habited women religious appearing behind him onstage in Ohio in late October. The women were affiliated with a small group known as the Children of Mary, and told RNS in a statement that they support presidents — regardless of party — who oppose abortion and uphold what they called "the Gospel of Life."