Commentary | Signs of the Times 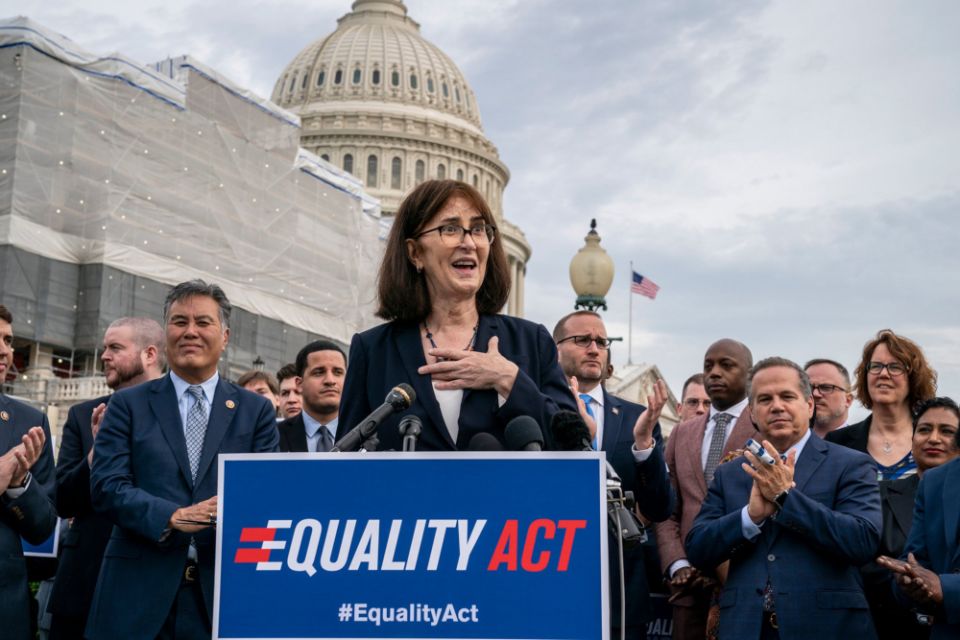 Transgender rights activist Mara Keisling joins advocates for LGBTQ rights as they rally before a vote in the House on the "Equality Act of 2019," sweeping anti-discrimination legislation that would extend civil rights protections to LGBTQ people by prohibiting discrimination based on sexual orientation or gender identity, at the Capitol in Washington, on May 17, 2019. She is flanked by Rep. Mark Takano, D-Calif., left, and Rep. David Cicilline, D-R.I., right, the chief sponsors of the bill to protect LGBTQ rights. (AP/J. Scott Applewhite)

Last week the House of Representatives passed H.R. 5, known as the Equality Act, which would strengthen bans on discrimination against LGBTQ persons by adding "sexual orientation" and "gender identity" to the definition of "sex" in federal civil rights laws. The measure got the support of NETWORK, a social justice lobby led by Catholic nuns, but was opposed by the U.S. Catholic bishops.

If it feels as if you’ve seen this movie, you have. In 2010, the same two groups took opposing positions on the Affordable Care Act, aka Obamacare, with the sisters supporting the ACA, while the bishops opposed it.

Back then, the bishops feared that Obamacare would make abortions easier. The nuns argued that there were adequate protections in the bill. The nuns proved to be right. When Republicans later attempted to repeal the ACA, the bishops switched sides and opposed repeal.

So far, the debate within the church over the Equality Act appears to be a sequel to the ACA fight.

The nuns argue that the Equality Act, which passed the House on May 16 by a vote of 236-172, is simply a matter of social justice, while the bishops fear it will force Catholic institutions to violate their moral principles.

"Justice demands that every member of our human family is protected from hate and discrimination," said NETWORK Executive Director Sister Simone Campbell, SSS, who is also a leader of the "Nuns on a Bus" campaign.

"It is the role of government to protect all of their people," Campbell said. "Therefore, the Equality Act is a necessity. Our Christian faith must not be used to deny the inherent dignity of every person. The efforts of some people of faith to do so denies the sacredness of LGBTQ+ people and is an attack on the common good. Congress must pass the Equality Act and enshrine LGBTQ+ civil rights into law."

Others raised questions about how the bill would apply to transgender athletes and bathrooms.

Who is to be believed in this controversy, the nuns or the bishops?

Because the bishops were shown to be wrong in the original movie, so to speak, in 2010, most observers will be inclined to cheer on the nuns. The bishops tend to hire paranoid advisors who forecast the most detrimental outcomes of proposed legislation. Then again, sometimes even the paranoid are right.

What’s different in this battle is that the nuns are divided. In the fight over ACA, Sister Carol Keehan, president and C.E.O. of the Catholic Health Association, joined forces with Sister Campbell in support of Obamacare. This time, the CHA is not supporting passage of the equality bill. It is afraid that the Equality Act could force Catholic hospitals to perform services that they consider immoral.

Catholic hospitals have no problem treating LGBTQ patients if they have a broken arm, cancer, AIDS or any other ailment. What they fear is being forced to do gender reassignment surgery or other procedures they find unacceptable under Catholic teaching.

Currently, these institutions can refuse to do these procedures and are protected under the 1993 Religious Freedom Restoration Act. The Equality Act specifically states that RFRA cannot be used as an argument for withholding services based on gender or sexual orientation.

"Federal law has long recognized that certain services can present a potential conflict for some faith-based health care providers with religious or moral objections to providing those services, and protected them from having to do so," says Keehan. "We are concerned that the Equality Act omits and could erode or reverse those protections."

Sadly, ideologues on both sides are distrustful of each other and reluctant to compromise. Everyone needs to take a deep breath and listen to Sister Carol.