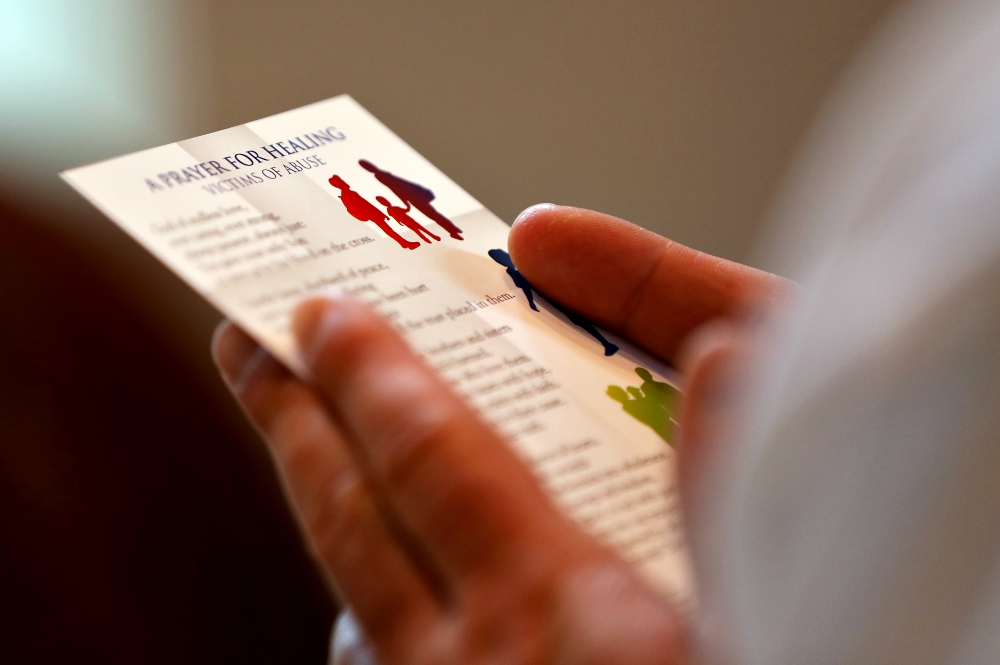 A clergyman reads a prayer card during a Mass with special intentions for survivors of abuse and for abuse prevention in the chapel of the headquarters of the U.S. Conference of Catholic Bishops in Washington April 8. (CNS/Bob Roller)

A survey released May 20 by the St. Leo University Polling Institute reveals that 81.3% of Americans in general, and 89.3% of Catholics, believe the Catholic Church was slow to take action on clergy sexual abuse.

The poll also asked respondents how much they agreed that each of a series of reasons had contributed to "slow church action," and asked them to select "contributing factors" for the abuse crisis.

It found that by far the most commonly identified cause of the church's slow response — by 74% of Americans and almost 85% of Catholics — was a desire to "preserve and protect the Church's influence and reputation at all cost."

The second and third most popular options were "to avoid the financial ramifications" and "to protect the 'good old boys' network,' " with both statements earning agreement from between 40% and 42% of both Americans overall and Catholics.

On several other options, Americans in general and Catholics diverged by more than 10 percentage points. Americans overall more likely to indicate that church leadership "believed the clergy instead of victims" (37.6% versus 26.4% of Catholics) or believed "clergy were above the law" (34.1% versus 24%).

Catholics lent more credence to "ineptitude/lack of experienced oversight or leadership" (36% of Catholics versus 24.8% of Americans overall) as the cause of slow responses.

Less than 10% of both groups believed that the church hierarchy was unaware of abuse.

A total of 79.5% of Americans in general and 93.6% of Catholics say the "hierarchy should require mandatory reporting of sexual abuse by clergy to appropriate law enforcement officials outside of the Church."

When offered the list of contributing factors, both Americans in general (52.4%) and Catholics (65.7%) blamed the fact that "abuse was handled internally — within the church," making abusive priests unafraid of consequences. The second most common factor cited by Catholics, at 52.1%, was clerical celibacy, while Americans in general were second most likely (48.8%) to blame lack of oversight by church leadership.

Abusive priests' lack of personal morality or respect for the law and victims, and blind or excessive faith in Catholic clergy, were next on the list, with between 39% and 44% of both groups selecting those factors.

A little over 10% of each group blamed "the 1960s sexual revolution/lax morality" — reasons cited by Pope Emeritus Benedict XVI in a recent letter and backed by some conservative reformers.

The St. Leo University Polling Institute, based out of a Catholic university "founded on Benedictine traditions" in St. Leo, Florida, has also tracked Pope Francis' popularity throughout his papacy. Their latest favorability numbers, collected in April and released with the sex abuse survey, show that 57.9% of respondents strongly or somewhat approve of the pope.

Following a trend over the past four years of ratings peaking in spring and dipping in fall before beginning to rise again around Christmas, the pope's latest rankings are up from 55.6% in February and have notably increased since his lowest-ever rating of 44.7% favorability in October 2018.

As usual, when asked how the pope was handling specific issues, respondents most supported his actions on human rights and "advancing the cause of the poor," with over 60% approving. Environment, marriage and family, and migration issues fell somewhere in the middle (between 40% and 50% favorability.)

The overall favorable opinion of the Catholic Church in America increased slightly from 37.2% to 40.1% between February and April, while among Catholics it dropped modestly from 62.5% to 57.1%.

The survey was conducted April 22-29 using a basis of 1,000 respondents nationwide. It has a margin of error of plus or minus 3 percentage points.