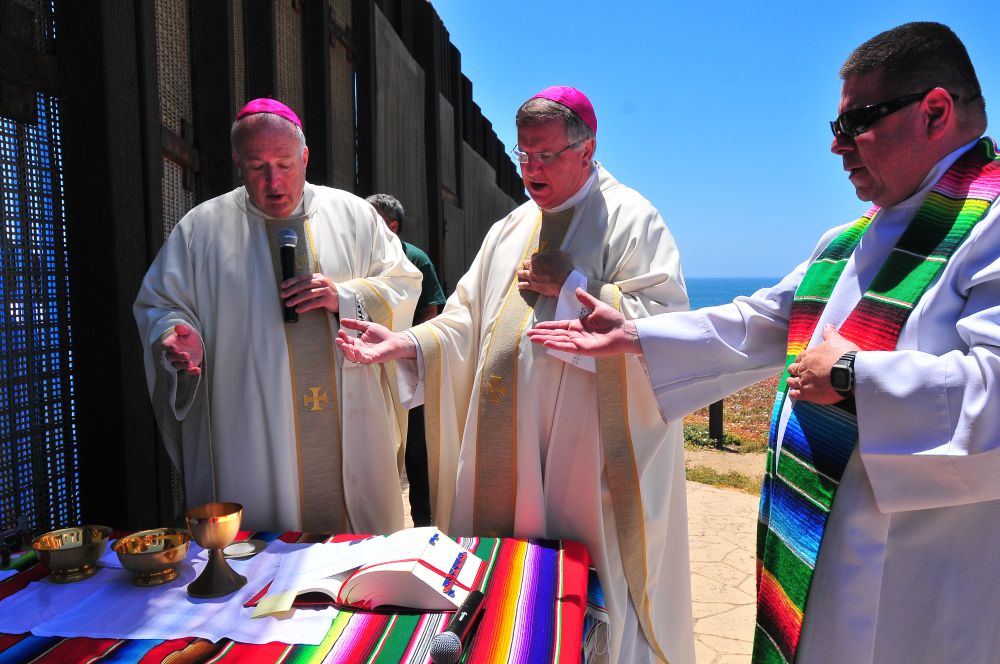 The San Diego Diocese is seeking a way to shelter asylum-seekers so they can remain with their children, according to Bishop Robert McElroy who celebrated a binational Mass June 9 at the U.S.-Mexico border.

McElroy said the diocese is answering the Trump administration policy of separating children from parents who seek asylum or enter illegally by "opening up a program that will try to take in mothers who come here and are granted the first level of asylum, so that we can try to keep mothers with their children, rather than being separated."

The San Diego bishop added: "I think it's inhumane to deliberately separate mothers from their children as a policy."

The bishop's comments to Times of San Diego came after a binational Mass in the Friendship Park area of Border Field State Park, sponsored by Border Angels and World Vision.

McElroy and Auxiliary Bishop John Dolan prayed, distributed Communion and listened to a Mass in Spanish in Mexico while bishops from Tijuana, Nuevo León and Yucatán spread the message of love to parishioners across the border.

The Mass was a kickoff of a yearlong program, Footprints of Tenderness, in which a flag and cross will be carried through Mexico, Central America and South America with the message of safety for children.

Enrique Morones, founder and executive director of San Diego-based Border Angels, spoke about the Mass and multinational caravan that will carry a colorful kite saying Footprints of Tenderness in Spanish and a cross decorated with butterflies and a mother hugging her child.

The cross was painted by Border Angels member Sandra Sanchez.

"We've got to treat our children with love and respect and dignity, and that's why it was so important to have this binational Mass," Morones said.

"Let's love our children, protect our children. We've got to be a good example for these kids. Treat them with tenderness and with love — and that's something that we're all failing to do with the laws and the policies of this country under Trump."

Dolan reflected on the Mass he celebrated at Border Field State Park.

"It's just an amazing thing that here we are on a border where the ocean is so beautiful, absolutely beautiful, and you have this wall that represents a division," he said.

Dolan said "of course" every country has a right to defend its borders.

"That's the church's understanding," he said. "But we understand, too, that sometimes we can be overly aggressive in this area. And this is no small thing."

Despite the clash of ideologies, Dolan said, "We need to step up our level of compassion as human beings for those on both sides of the border. … We are talking about human beings, with bodies and souls and minds and hearts like everyone else. "

Asked what the diocese can do about immigration problems, the associate bishop said it would continue to proclaim the Gospel "first and foremost."

The Gospel, he said, holds that a kingdom lies beyond the world in which we live — "and that kingdom has no boundaries." 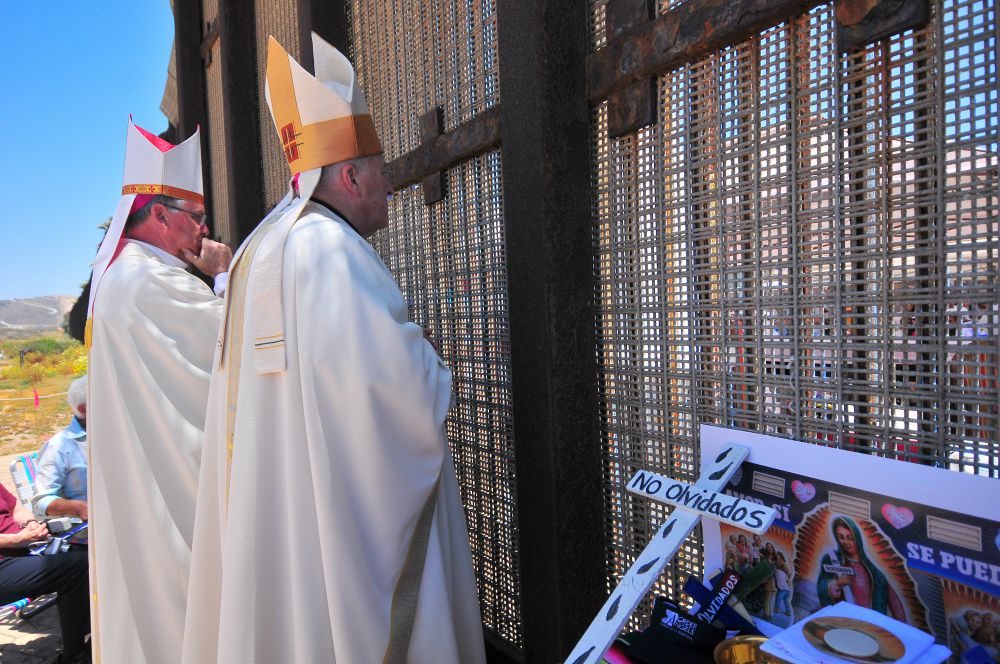 On Friday afternoon, June 8, Border Angels and World Vision met with about 50 Jesuit priests in San Diego for their annual ordination of new priests.

The priests, city and community leaders and local residents met at Chicano Park to pray and hear testimonials by Deferred Action for Childhood Arrivals (DACA) recipients.

Irving Hernandez said he came to the United States from Mexico with his family when he was 6 years old.

"There is no logic in this time and age," Hernandez said.

Hernandez, who recalled earning a 4.2 grade-point average and bachelor's degree in science in aerospace engineering at San Diego State University, said he should have legal status by now.

"I should be treated as a human, but I'm not," the DACA recipient said. "This DACA system hasn't been fixed. … I find strength in a God that tells me that I love you just because of who you are and not what documents make you eligible or ineligible to live."

"We are beyond praying; we must act," he said.

Morones, speaking at the gathering Friday, agreed that now is a time for action.

Referring to Trump, he said, "Now he's calling us animals. Instead of calling us rapists and criminals, now we're animals. He's herding all these people through the judicial system to deport them. So it's just a horrific situation. We're going to stand up to it and continue to prove that love has no borders." 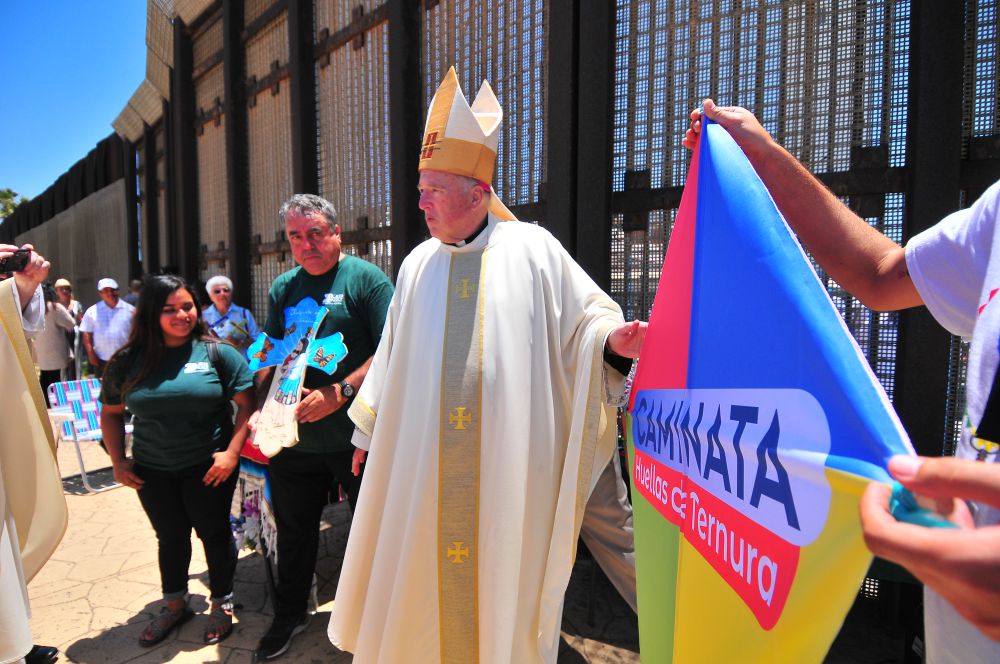 Enrique Morones holds a cross while San Diego Bishop Robert McElroy gets ready to bless the kite that reads "Footprints of Tenderness" in Spanish. (Times of San Diego/Chris Stone)

San Diego Councilman David Alvarez, also at Chicano Park, said it's important to do the right things for children.

"It's perplexing because our country has always been about these types of values, and yet everything's being turned upside down," he said. "This is an issue that really shouldn't be a question. It's unfortunately become political and a wedge issue."

Alvarez said the focus should be on families and kids.

"I think raising awareness through the church is really important," he said.

Alvarez said discrimination has occurred throughout history, but he thinks the worst in people is being brought out these days.

"There will be a time when we look back and say: How did we do that?" — as is said of Native American and African-American children and their families being separated, the outgoing councilman said.

"It's the same thing, and there will be a time when we look back in shame in this country."

During a speech to several dozen people at Chicano Park, Alvarez said some people need to learn how to be compassionate.

One of the most passionate speakers at the gathering was community organizer Gloria Morales-Palos.

She added: "I just want to tell people to get involved. It is time for us to make history. It's time for us to get out and vote. November is coming up. We need to make an effort to make a difference.

"If we want the world to change to our favor, we have to get out and vote."

[Chris Stone is a photojournalist for the online news source Times of San Diego, where this story first appeared.]

Read this next: Editorial: Family separation is an immoral, ineffective policy
This story appears in the Families Separated at the Border feature series. View the full series.