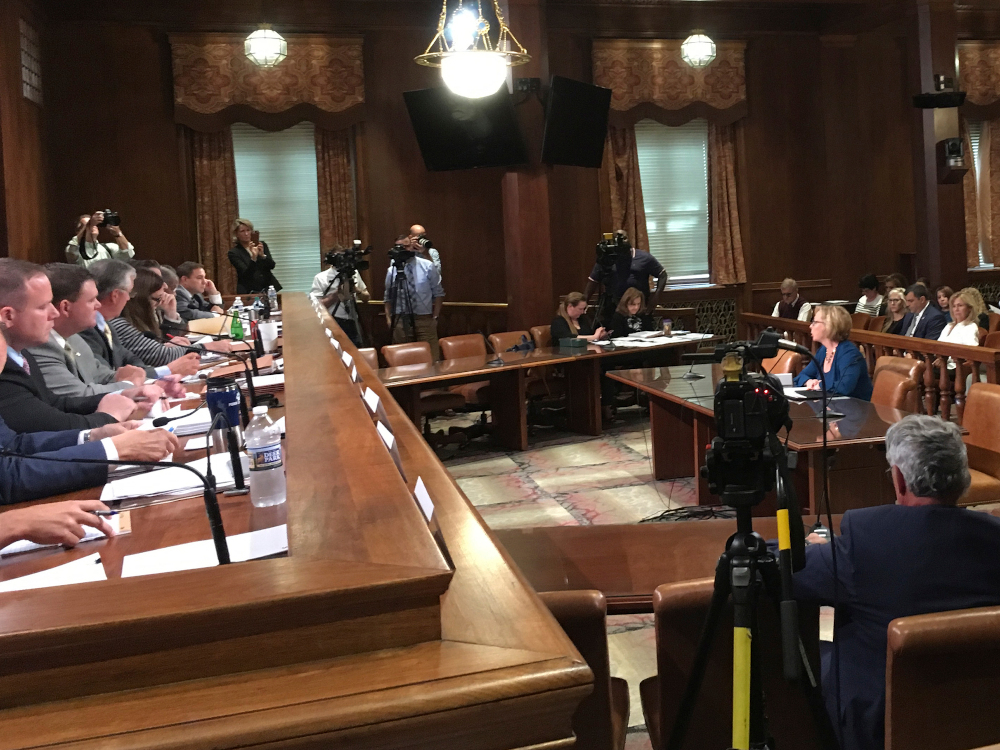 The Pennsylvania Senate's Judiciary Committee hears on Wednesday, Oct. 2, 2019, from University of Pennsylvania professor Marci Hamilton. She was the first witness in a hearing in Harrisburg, Pennsylvania, about potential changes to the time limits that apply to child victims of sexual abuse. (AP Photo/Mark Scolforo)

A legislative tug-of-war over altering rules for child sexual abuse claims that occurred too long ago to file lawsuits resumed Wednesday in Pennsylvania’s Capitol, with victims and their advocates on one side and lawyers for religious organizations and the state’s insurance industry on the other.

The Judiciary Committee’s informational hearing took a broad look at the legal, procedural and ethical issues involved. There were no votes, and no indication whether bills stalled in the Senate might move ahead any time soon.

Judiciary Chairwoman Lisa Baker, R-Luzerne, said the forum was needed because she is among several senators who have joined the committee since a similar process occurred more than three years ago.

“We are not here today to decide the fate of specific bills before us,” Baker said. After hearing victims’ testimony at the end of the five-hour hearing, the senator said she was too upset to comment to reporters.

A two-year window for otherwise time-barred lawsuits is one of four provisions recommended by a grand jury report last year on child sexual abuse in Pennsylvania Roman Catholic diocese.

Marci Hamilton, a University of Pennsylvania professor who leads Child USA, a child abuse and neglect think tank, described Pennsylvania’s statute of limitations as antiquated and said retroactive windows for litigation can help bring the truth to light.

Administrators for compensation funds set up a year ago by six Catholic dioceses provided an update, saying they have paid $65 million to 384 claimants over the past year. Those figures are sure to rise, as more than 200 letters have arrived in recent days, postmarked before a Sept. 30 deadline for four of the funds, said co-administrator Camille Biros.

The dioceses have been making payments in return for assurances from victims that they will not sue.

Several women spoke vividly of their victimization, and one referred to the arrest last week of Sen. Mike Folmer, R-Lebanon, on child pornography possession charges. They urged lawmakers to act.

“Opening a window does not guarantee that a predator or institution will be held liable. There still is a burden of proof that has to be met,” said Jennifer Goetz, who said her attack by a Johnstown pediatrician in the 1980s was deemed to have been too old to be prosecuted. The Associated Press does not identify victims of sexual abuse by name unless they give permission, as Goetz did.

In addition to a window to permit otherwise time-barred claims, there is also a proposal to eliminate the criminal statute of limitations for criminal child sexual abuse claims going forward. That proposal, another grand jury recommendation and far less divisive than the civil lawsuit window, would not be retroactive.

Sam Marshall, president of the Insurance Federation of Pennsylvania, said his group is against legislation offering a retroactive window for lawsuits, citing constitutional concerns. He said a law that permits it would be “a false promise” and predicted it will inevitably result in protracted litigation.

Marshall argued that it would not be fair to insurers to create retroactive liability, because his industry would not have the ability to retroactively price and create a premium for that liability.

The Republican majority in the Senate killed statute of limitations bills a year ago, in the previous legislative session, and has not acted on legislation approved by the House in April that would eliminate the criminal statute of limitations for child sexual abuse crimes and to begin the process of amending the state constitution to create a two-year window for civil lawsuits.