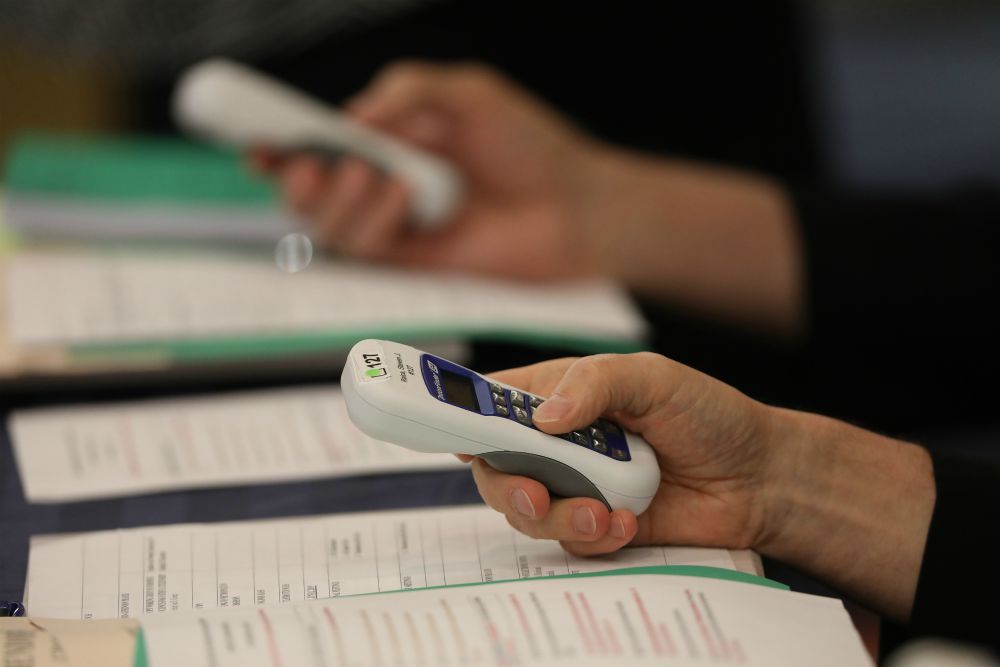 Bishops use electronic voting devices during the spring general assembly of the U.S. Conference of Catholic Bishops in Baltimore June 12. At their June assembly, the U.S. bishops approved the "Protocol Regarding Available Non-Penal Restrictions on Bishops." (CNS/Bob Roller)

The Survivors Network of those Abused by Priests (SNAP) sent a letter July 5 to Kansas City-St. Joseph Bishop James Johnston requesting he use a new protocol created by U.S. bishops to block resigned Bishop Robert Finn and retired Bishop Joseph Hart from ministry and all church meetings and activities.

In a separate letter addressed to Pope Francis, SNAP urged he forgo a planned trial and immediately laicize Hart, 87, who from 1978 to 2001 led the Diocese of Cheyenne, Wyoming. Last year, the diocese found credible accusations he sexually abused three male minors. Additional abuse claims date back to Hart's time as a priest in Kansas City (1956-1976). Hart has repeatedly denied the allegations.

In 2012 Finn, 66, was found guilty of a misdemeanor for failing to report suspected child abuse. He served a two-year suspended sentence, in addition to meeting monthly for five years with a county prosecutor to avoid another charge. Finn resigned in April 2015 following a Vatican investigation of the diocese.

At their June assembly, the U.S. bishops approved the "Protocol Regarding Available Non-Penal Restrictions on Bishops." That new policy permits a diocesan bishop to take measures against a bishop emeritus whose "resignation or removal was due to the sexual abuse of a minor, sexual misconduct with an adult or grave negligence of office" regarding the sexual abuse of minors.

Among available restrictions are barring a retired bishop from public ministry — including preaching and celebrating sacraments, which can extend to hearing confessions — and limiting his benefits, such as for travel. The protocol stipulates public notice of any restrictions, as well as informing the Vatican. It can be implemented by a bishop emeritus' successor, the bishop of the diocese where he resides or seeks to minister, or the episcopal conference.

The protocol was in part sparked by outrage a year ago to reports of credible accusations against now-former cardinal Theodore McCarrick, and whether fellow bishops knew of the allegations or any restrictions imposed on him. Before he was laicized, several bishops at their November meeting voiced that the U.S. Conference of Catholic Bishops should censure and disinvite McCarrick from conference proceedings. 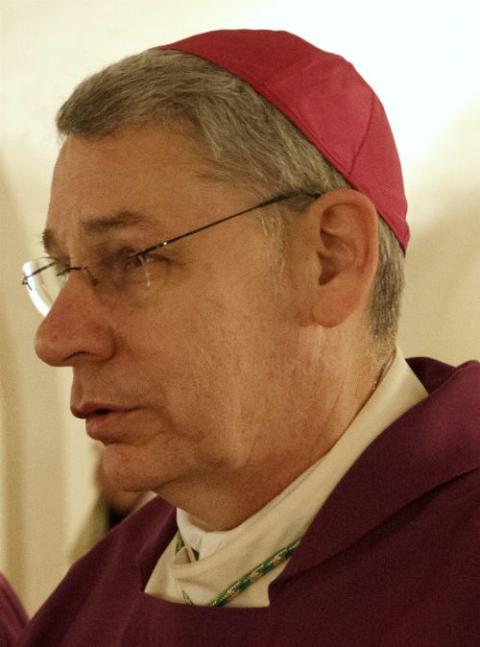 Finn has attended recent bishops' meetings, though Hart has not.

David Clohessy, the Missouri SNAP director, urged bishops to use the new powers to discipline one another, particularly in the cases of Finn and Hart.

"It will only have an effect if it's used. And here is a perfect opportunity to use it," he told NCR.

Jack Smith, spokesman for the Kansas City diocese, said that Hart has been restricted from all public ministry in the diocese since July 2018, when Cheyenne Bishop Stephen Biegler announced an investigation had found "credible and substantiated" allegations that Hart had sexually abused two Wyoming teens. A third case was later deemed credible.

At that time, the Cheyenne Diocese announced the Congregation of Bishops extended restrictions everywhere on Hart's public ministry that Biegler's predecessor Bishop Paul Etienne had first instituted in September 2015. The diocese told NCR the pope imposed restrictions on Hart prohibiting him from public liturgies or any contact with minors, youth, seminarians or vulnerable adults.

When the Kansas City Star in October approached him at his home in Cheyenne, the octogenarian bishop was on oxygen but told the newspaper "I feel fine. Doing great." Smith told NCR he could not recall Hart doing any recent ministerial work in the diocese beyond officiating at the 50th anniversary of his brother James' ordination in 2015.

"But otherwise, he has had no ministerial role in the diocese, and will not in the future," he said. Smith added any decision to apply the new protocol to Finn would be up to Johnston, who is out of town until the end of July.

Since his resignation, Finn has kept a low profile, and has slipped from the focus of many area Catholics. In December 2015, he began living at the motherhouse of the School Sisters of Christ the King, in Lincoln, Nebraska, where he serves as chaplain.

Last September, Finn attended the dedication of a new church and abbey for the Benedictine Sisters of the Priory of Our Lady of Ephesus, in Gower, Missouri. According to the diocesan newspaper, Finn, who in 2006 invited the traditional religious order to relocate to Kansas City region, served as principal celebrant and consecrator.

Jim McConnell, a SNAP member who in 2011 abandoned preparation for the permanent diaconate because he could not pledge obedience to Finn, said the bishop's ability to present himself as in good standing at Catholic functions is a source of anger for abuse survivors.

"Put yourself in the shoes of the victim who was abused by a priest under his authority. And knowing that the man can just walk back here and act like nothing's happened, it's just insulting," he told NCR.

Prior to the protocol's approval in June, several other bishops had taken steps to place limits on their predecessors. 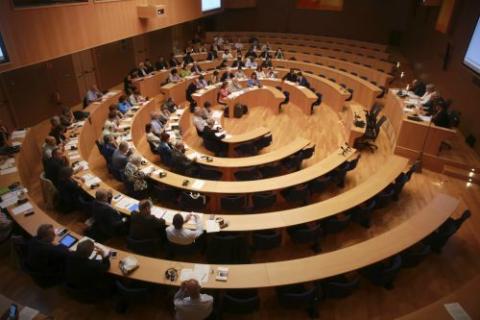 After the 2013 release of thousands of files detailing the handling of abuse allegations, Los Angeles Archbishop Jose Gomez barred his predecessor Cardinal Roger Mahony from any public ministry in the archdiocese. And in December, St. Paul-Minneapolis Archbishop Bernard Hebda prohibited the public ministry of former Archbishop John Nienstedt, who was subject of an investigation into possible sexual misconduct with adults, until "all open allegations are resolved."

In advocating for Hart's immediate removal from the priesthood, SNAP in a second letter compared his case against McCarrick's, arguing that the pope disciplined the former Washington, D.C., cardinal within months of abuse allegations surfacing, while accusations against Hart have been public for more than a decade.

"For the sake of prevention, healing and justice, we beg you to act promptly and pastorally, by defrocking Hart now, without a trial," SNAP wrote.

In June, it was announced that Hart would face an "administrative penal process" with the Congregation for the Doctrine of the Faith. Catholic News Service confirmed June 13 with Alessandro Gisotti, interim director of the Vatican press office, that the process had begun.

Biegler, the Cheyenne bishop, told NCR in an email the diocese had not received a timeline from the congregation for Hart's case. He said while they "understand and support an appeal for prompt action," the diocese could not support a call to forgo the judicial process altogether.

"The cases of sexual abuse by clergy are egregious acts causing lifelong traumatic injury, and we are doing everything possible to address all allegations promptly and seek justice for those who have brought substantiated allegations in a timely fashion," Biegler said. "At the same time, we are respectful of due process and right to a fair judicial process for the accused."

Cheyenne police are in the review phase of their own investigation into members of Catholic clergy, spokesman Kevin Malatesta told NCR. State law prohibits police from identifying suspects or victims involved in an alleged sex crime.

If Hart faces charges from that investigation, he would be the first U.S. bishop prosecuted for sexually abusing a minor.