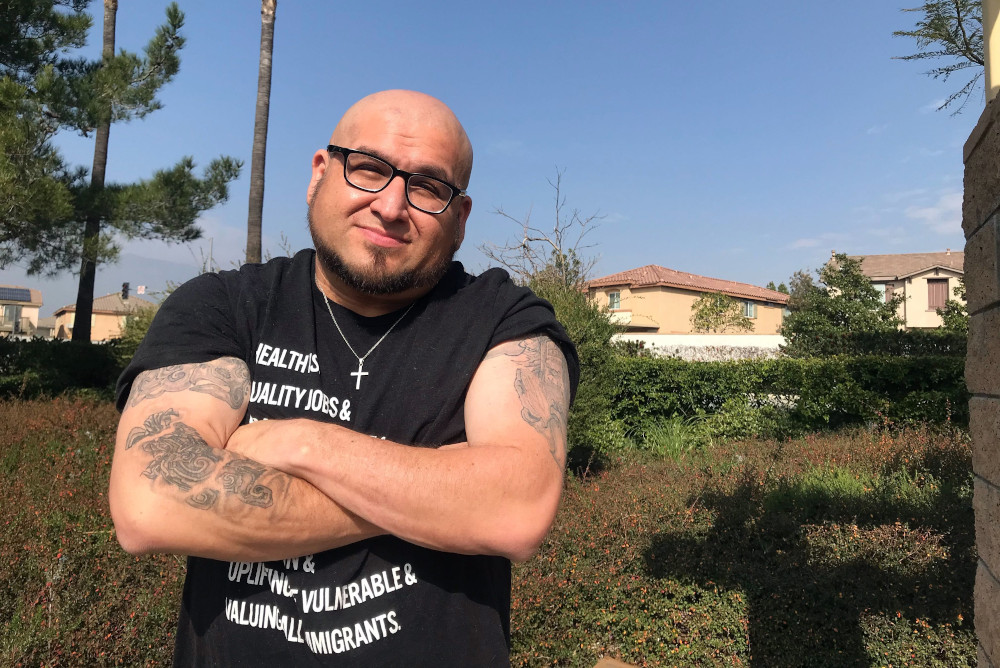 Allen Hernandez wears his Christian faith and his indigenous Maya roots on his sleeves, literally.

His left arm is tattooed with images of the sacred heart of Jesus, a pair of hands clasped in prayer and an angel praying over the tombstone of a friend.

His right forearm is emblazoned with a tattoo of a feathered serpent, a Mesoamerican deity worshipped by the Yucatan Maya people.

"I am indigenous. I am Mayan and I am Christian," said Hernandez, 39, whose parents are from Guatemala. "I don't know how these fit in the same sentence."

Hernandez, who leads an environmental justice nonprofit, often grapples with his identity as a Christian man who cares deeply about the rights of immigrants, LGBTQ people and working class communities. He recognizes the perplexity of his tattooed arms because "one's mission was to kill the other."

Being a Latino Christian is often a dilemma in a country where the churches are predominantly white or African American. One tradition requires you to adopt the faith of your erstwhile colonizers while the other is built on its own legacy of civil rights and race.

This identity struggle over faith and heritage is what led Robert Chao Romero, a professor of Chicana/o studies and Asian American studies at UCLA, to write his upcoming book, Brown Church. In it, Chao Romero delves into a 500-year history of Latino Christian social justice activism in Latin America and the United States. While Latinos are not a monolith, they do share a history of colonization and oppression that Chao Romero underscores in his book, which will be released in May.

For Chao Romero, it's important to highlight this legacy for Latinos — like Hernandez — "who feel in the spiritual borderlands."

Chao Romero, the son of a Mexican father and a Chinese immigrant mother, proposes a "Brown Christian" identity for Latinos who feel trapped between institutional religion and social justice activism.

"We care about justice. We care about our communities. We want to devote our lives to those issues, but we also want to capture the fullness of our cultural background. Yes, we have Spanish ancestry, but we also have indigenous ancestry," he added. "We're not just going to assimilate."

In Brown Church, Chao Romero goes back to 1511, when Antonio de Montesinos, a Dominican friar, preached a fiery sermon condemning the Spanish Conquest. This took place on the Sunday before Christmas in a straw-thatched church on the Island of Hispaniola, Chao Romero wrote.

The book also documents the life of a priest who during the mid-1850s challenged the U.S. conquest of the Catholic Church in the Southwest.

Chao Romero highlights how Cesar Chávez fused Mexican religious symbols, like La Virgen de Guadalupe, and certain practices, such as fasting, with Catholic social teaching as he led the unionization of farmworkers in the U.S.

The professor also mentions the sanctuary movement of the 1980s, when U.S. churches and synagogues took in migrants who fled violence in Central America.

And he refers to Jesus as the "Savior from Galilee," who sides with the oppressed and most vulnerable and who stands against segregation and exploitation.

"We need a social identity which captures our hearts for justice and the fullness of our cultural background," Chao Romero said.

As the U.S. continues to experience a decline in Christianity, Chao Romero hopes a "Brown Christian" identity could draw the younger Latino generation into the church.

Americans, including Latinos, are becoming less Christian as the number of people with no religion is rising, a recent Pew Research Center study found.

With this shift, the report found that Latinos in the U.S. are no longer majority-Catholic. In 2018-19, 47% of Latinos identified as Catholic, down from 57% a decade ago.

Meanwhile, the portion of Latinos who identified as Protestant remained roughly the same, at just under a quarter of the Latino population.

But even amid this religious decline, Latinos and African Americans were more likely to describe themselves as Christians and to attend religious services than white Americans. Among Latinos, 51% say they attend church more than once a month, compared with 42% of whites.

Marshela Salgado-Solorio, a program director for University Christian Church in San Diego, is familiar with this rise of the nonreligious. Her church, a progressive congregation that welcomes all sexual orientations, skews older. Salgado-Solorio said it's difficult to bring younger families into the congregation.

"I think it's the same reasons I have such a hard time reconciling my own identity with my friends and with people in the community," Salgado-Solorio said. "Part of it, it's stereotypes about the church."

"The churches need to look at history and what's been done to help be a voice for their own people. If we don't stand up, the Latino churches are going to die out within the next few decades."

Salgado-Solorio, 41, grapples not with her faith, but with the perceived ideas that others have about her based on her religious upbringing. These preconceived ideas include being conservative, Republican, close-minded and against immigrants and LGBTQ people, she said.

She was raised in the Church of the Nazarene. Her Guatemalan father worked as a minister in Idaho, where he advocated for the migrant worker community. Her parents were the first nonwhite missionaries from the Church of the Nazarene when they were sent to do work in Switzerland, Salgado-Solorio said. Her father also led a congregation in Chiapas, Mexico. Now back in San Diego, her dad is teaching as an adjunct professor at Point Loma Nazarene University, where he helped start a master of ministry program in Spanish.

Through all of this, Salgado-Solorio saw her father work with interfaith organizations in Latin America and how vocal he became when he felt the church strayed from its social justice roots in helping the poor.

Because of her upbringing, Salgado-Solorio said she "never felt like I had to separate that identity myself as an individual or at home." That changed after she graduated from Point Loma Nazarene University, a private Christian liberal arts college in San Diego.

Once she was outside of that university context, Salgado-Solorio felt she had to be honest with her friends who weren't necessarily people of faith or who were raised Catholic or Protestant and no longer wanted to be involved with the church.

When people learn she's a person of faith, they assume "I'm all these checklist of things that they've seen more conservative Christians or evangelicals preach," she said.

For Salgado-Solorio, just being Latina in the U.S. "you are automatically a part of the oppressed in some way." That hardship is even more pronounced depending on your gender, sex orientation or income, she said.

"The churches need to look at history and what's been done to help be a voice for their own people," she said. "If we don't stand up, the Latino churches are going to die out within the next few decades."

For Hernandez, it's gotten harder to go to church.

He doesn't understand how certain Christians can justify the Trump administration's immigration policies and feel comfortable going to church. Hernandez said it's hard to grapple with images of immigrant children held in cages.

In June 2018, then-Attorney General Jeff Sessions cited the Bible in defense of border policy that separated hundreds of immigrant children from their parents after they entered the U.S. illegally.

Hernandez became Christian in 2000 while he was a student at Azusa Pacific University, a private Christian university in Southern California. Hernandez, who grew up in a working class home in San Bernardino County, decided to attend Azusa Pacific after he was offered a full-ride scholarship. In his younger days, he'd had issues with the law and he decided to accept Christ at a university chapel service.

During chapel services, Hernandez said he was often surrounded by white, conservative evangelicals. On his own time, he read the works of Gustavo Gutierrez — known as the father of liberation theology — a movement focusing on the poor and oppressed. Hernandez also studied James Cone, one of the founders of black liberation theology.

Although his Christian faith is what helped get him out of trouble, Hernandez said it's still difficult to embrace those two identities as one.

He's not fully comfortable embracing the Brown Christian identity because it "has oxymoron written all over it."

But he's not ready to give either up.

"This might be something that folks like me have to grapple with for the rest of our lives," Hernandez added. "That's fine because life is filled with contradictions."