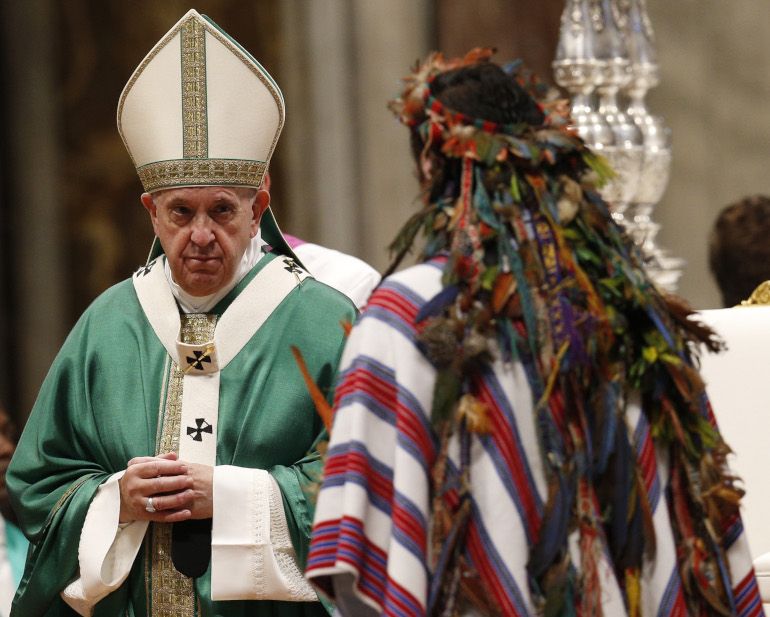 Pope Francis accepts offertory gifts from an indigenous man as he celebrates the concluding Mass of the Synod of Bishops for the Amazon at the Vatican Oct. 27, 2019. (CNS photo/Paul Haring)

Vatican City — Pope Francis' highly anticipated document responding to last year's Synod of Catholic bishops from the Amazon region, expected to address a host of sensitive topics, will be released Feb. 12, the Vatican has announced.

The document, taking the form of an apostolic exhortation, has been given the Spanish title Querida Amazonia, suggesting an English translation of "Beloved Amazon."

The Feb. 7 announcement of the document's coming release ends weeks of speculation about its publication, partially fueled by a letter sent to the world's bishops from the Vatican in January, which asked global prelates to consider hosting press conferences to support the text upon its release.

That abnormal request appeared to acknowledge the unique atmosphere surrounding Francis' document, which, among other issues, is expected to address the synod's proposal to allow for the priestly ordination of married men on a limited, regional basis, and its call for better inclusion of women in Catholic ministry.

Also expected to be addressed is the rampant environmental destruction taking place in the Amazon, which was brought to global attention last year with the sparking of tens of thousands of unprecedented wildfires.

The text of the exhortation will be released at noon in Rome Feb. 12. The Vatican is hosting a press conference an hour later to officially present the document to the public.

Among those taking part in the conference: Cardinal Lorenzo Baldisseri, the secretary general of the Synod of Bishops; Cardinal Michael Czerny, one of the Amazon synod's organizers; Jesuit Fr. Adelson Araujo dos Santos, a theologian at the Pontifical Gregorian University, and Mary Reparatrix Sr. Augusta de Oliveira, the vicar general of her order.

Also included is Carlos Nobre, a Brazilian scientist who was one of the authors of the Fourth Assessment Report of the Inter-governmental Panel on Climate Change, which was awarded the Nobel Prize for Peace in 2007.

The 185 Amazon synod members asked Francis to allow for bishops in the region to ordain current married deacons as priests, in order to meet sacramental needs in the vast, hard-to-traverse area.

The pope's consideration of the request received a bevy of unexpected interest in January, with news that retired Pope Benedict XVI had coauthored a volume defending the church's practice of clerical celibacy.

Benedict's intervention touched off fears among theologians that the former pope might be trying to tie Francis' hands, effectively preventing the reigning pope from approving the synod's request.

Benedict's personal secretary, Archbishop Georg Gänswein, has since claimed that the ailing, 92-year-old ex-pontiff did not mean to coauthor the volume, and has asked for the removal of Benedict's name as a coauthor.

Top Vatican cardinal says Biden should not be denied Communion

Vatican confirms Francis did not renew terms of Burke, Pell on worship congregation

A roundup of this week's events in Rome