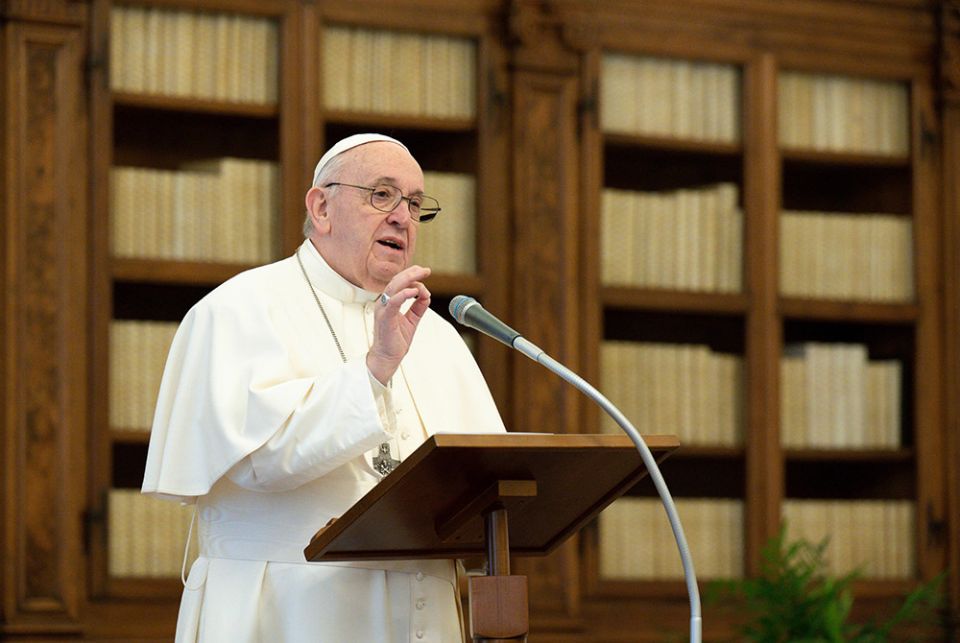 Pope Francis leads the midday recitation of the Angelus Jan. 17, 2021, from the library of the Apostolic Palace at the Vatican. (CNS/Vatican Media)

Rome — A Vatican women's magazine has gently criticized recent remarks by Pope Francis on naming women to positions of authority in the Catholic Church, saying the pontiff touched a "sore point" by again warning against the so-called clericalization of women.

"Women Church World," a monthly supplement to the Vatican's L'Osservatore Romano newspaper, offers a commentary in its January edition on the late 2020 volume Let Us Dream: The Path to a Better Future, a collaborative effort between Francis and British author Austen Ivereigh.

The commentary, authored by former longtime Vatican Radio journalist Romilda Ferrauto and featured on the magazine's last page, praises Francis' words in the book about his efforts to appoint more women to Vatican roles.

But it also says the pontiff's later warning against "clericalizing" women, an admonition that Francis has repeated throughout his eight-year papacy, "touches a sore point [of] mistrust, fear and resistance."

"It goes to the heart of the uncertainty present in some fringes of the Catholic universe and beyond, regarding the exclusion of women from ordained ministry and their perhaps consequent subordination," writes Ferrauto.

Francis has struggled throughout his nearly papacy to better include women in the Catholic Church's leadership structure and ministries, and has repeatedly reaffirmed Pope John Paul II's ban on women's ordination to the priesthood.

The pope also warned against "clericalizing" women in his February 2020 document responding to the Vatican's Synod of Bishops for the Amazon region, saying he did not want the church to restrict its understanding of itself to a consideration only of its "functional structures."

"Such a reductionism would lead us to believe that women would be granted a greater status and participation in the Church only if they were admitted to Holy Orders," he said in the document. "But that approach would in fact narrow our vision; it would lead us to clericalize women."

In Let Us Dream, the pope appeared to offer his first public defense on appointing women to roles of authority. He pointed especially to his 2016 appointment of Italian Barbara Jatta to lead the Vatican Museums and to several other women he has named as undersecretaries of Vatican departments.

"Perhaps because of clericalism, which is a corruption of the priesthood, many people wrongly believe that Church leadership is exclusively male," the pope stated in the book.

"To say they aren't truly leaders because they aren't priests is clericalist and disrespectful," he added.

Ferrauto writes that women's criticism of Francis' comments "were not many, but were harsh." She mentions a statement from the Women's Ordination Conference and remarks from Anne Soupa, a French theologian who had applied to the Vatican's embassy in Paris in 2020 to be the next archbishop of Lyon.

"For Francis, saying that in reality women do not govern because they are not priests is clericalist and disrespectful," writes Ferrauto.

"The fact remains that, as has been underlined many times, reflection on the Christian life for women obliges us to ask the question of priesthood in terms of power and the balance of powers and the realty of the ministerial priesthood in relation with the baptismal priesthood," she continues.

The rest of the January 2021 issue of "Women Church World" is largely dedicated to the work of Catholic women religious across the world. It carries the theme, "Sisters: Today is not yesterday," and focuses on how sisters are different than the images often shown of them in popular movies.

Editor's Note: The headline of this article was updated after publication.

A version of this story appeared in the Feb 5-18, 2021 print issue under the headline: Vatican magazine: Pope touched 'sore point' on women's leadership in new book .

Who is John Zmirak?

Don't look away; be moved by tragedy and help, pope says