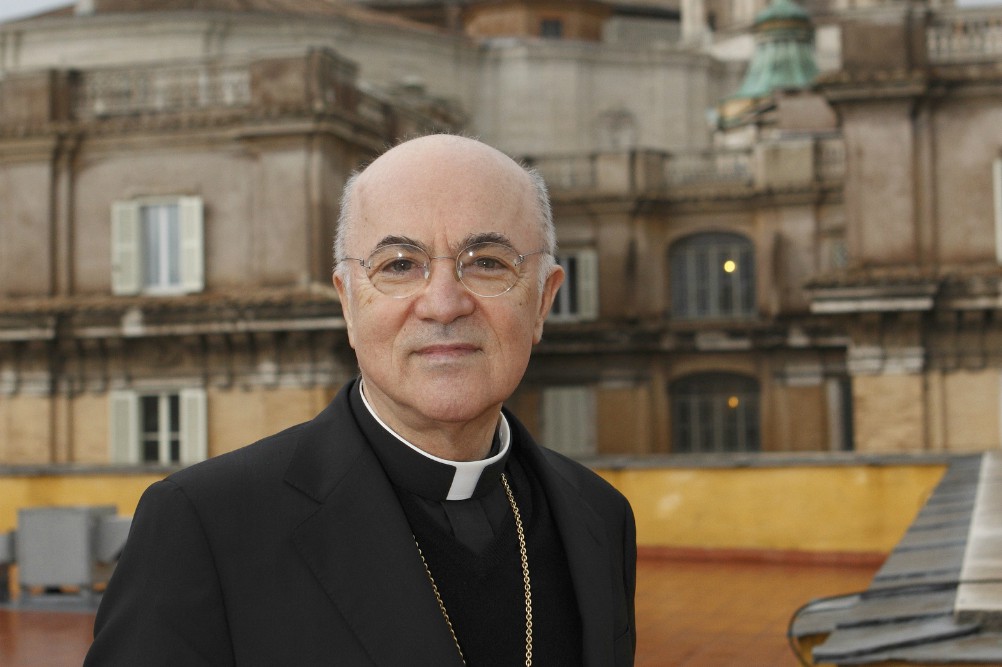 Italian Archbishop Carlo Maria Viganò, the apostolic nuncio to the United States, is pictured at his residence at the Vatican in this Oct. 20, 2011, file photo. (CNS/Paul Haring)

Editor's note: President Donald Trump tweeted June 10 that he was "honored" to have received an "incredible" letter from former Apostolic Nuncio Archbishop Carlo Maria Vigano — an open letter published on LifeSiteNews, a right-wing website that claims the letter has been viewed more than 2.5 million times. Who is Archbishop Vigano? An outspoken critic of Pope Francis, he gained a following after publishing a letter calling on the pope to resign. At that time, we published this backgrounder on Vigano. We are republishing it today.

Explosive charges of corruption and misconduct against high-ranking Vatican officials in local media. Names of those alleged to be involved published online, setting off feverous debate and investigations.

Letters from Archbishop Carlo Maria Vigano, written in early 2011 but published that month by an Italian television station, became the origins of the so-called "Vatileaks" scandal.

This and other controversies that have enwrapped the 77-year-old prelate in recent years echo in the release and reaction to the publication Aug. 26 of an 11-page letter from Vigano that accuses dozens of high-level church officials of a cover-up surrounding sexual abuse allegations against former Cardinal Theodore McCarrick, including that Pope Francis ignored those claims and knew of sanctions against him. In the letter, Vigano called for Francis to resign.

That an archbishop made such public accusations against a sitting pope, as well as a pope emeritus in Benedict XVI, is unprecedented in the modern church, said Massimo Faggioli, a theologian and church historian at Villanova University. For a similar situation, you'd have to go back to the 15th century, the close of the Middle Ages.

"This is something I don't remember in the last four, five, six centuries," he told NCR.

Faggioli pointed to parallels between Vigano's recent letter and his past controversies — its publication as Francis neared the end of his visit to Ireland mimicking the release of news of the pope's meeting with Kim Davis in the wake of his 2015 U.S. trip — but argued that the motive can be traced back to the archbishop's being denied a red cardinal cap.

"It's really not about McCarrick; it's about an old story that begins seven or eight years ago. He became an extremely disgruntled archbishop," Faggioli said.

Rise to the Vatican

Born in northern Italy to a wealthy family, Vigano was ordained a priest in 1968. Five years later, he entered the Vatican's diplomatic corps, where he held positions at embassies in Great Britain and Iraq. He worked more than a decade (1978-89) in the Vatican Secretariat of State before spending the next three years as the Vatican's permanent observer at the Council of Europe, in Strasbourg, France. Vigano was made an archbishop in 1992 by Pope John Paul II, who appointed him apostolic nuncio to Nigeria.

For much of his early years in Rome, Vigano kept a low profile, working mostly behind the scenes, said John Thavis, a former Vatican bureau chief for Catholic News Service who worked in Rome from 1983 to 2012.

That low profile extended into his appointment in 2009 to a high-ranking position as secretary-general of the governorate of the Vatican City State. There he earned a reputation for his skills as a financial reformer. He also faced internal tensions and criticism for what some viewed as micromanaging.

In 2010, anonymous emails circulated among cardinals and Vatican embassies alleging nepotism by Vigano in the career of his nephew, Msgr. Carlo Maria Polvani, who also worked within the Vatican Secretariat of State. A commentary in the Italian newspaper Il Giornale, also anonymous, suggested Vigano sought control over Vatican security services.

Despite writing Benedict asking to keep his position, Vigano was appointed Oct. 19, 2011, as apostolic nuncio to the U.S., succeeding Archbishop Pietro Sambi, who died earlier that year. The move was seen as a denial of his hopes of eventually being appointed president of the Vatican City State and with it, elevation to a cardinal.

In January 2012, an Italian television news report titled "The Untouchables" detailed letters Vigano had written to Benedict and his Secretary of State Tarcisio Bertone alleging financial corruption and "abuse of power," among other things that the head of the Vatican Museums was engaged in counterfeiting.

In his letter to Bertone, Vigano said that Bertone broke his promise to allow him to become president of the Vatican City State governorate after Cardinal Giovanni Lajolo retired.

A statement that February from Lajolo and then Cardinal-designate Giuseppe Bertello said Vigano's letters contained claims based on "erroneous evaluations" or "fears unsupported by proof," and ultimately determined the accusations were "unfounded." A report from Vatican Insider noted the commission of an internal investigation into the matter.

Through the Vatileaks letters, Vigano portrayed himself as a whistleblower and a martyr, Thavis said, but many inside the Vatican questioned the archbishop's credibility.

While Vigano arrived in the U.S. with little ideological reputation, Thavis said, he became seen as a fairly conservative voice. Within his first few months, bishops William Lori, Samuel Aquila and Salvatore Cordileone — all three viewed as aggressive "culture warriors" — were appointed to archdioceses in Baltimore, Denver and San Francisco, respectively. By the end of Vigano's tenure in April 2016, conservative writer George Weigel called him "the best nuncio we've had thus far."

"The archbishop understood that there was no honorable retreat from what some deplored as 'culture wars.' He knew who had declared war on whom; that the Church had not been the aggressor in this struggle; and that the battle had to be engaged, with the tools of reason and persuasion," Weigel wrote.

Vigano's participation in the March for Marriage drew criticism for a diplomat taking part in a domestic political event. So too did his arrangement of a meeting during Francis' September 2015 U.S. visit between the pope and Davis, a Kentucky county clerk who served five days in jail earlier that month for refusing to issue marriage licenses to same-sex couples due to her Christian beliefs.

While the meeting took place Sept. 24, hours after Francis' speech before Congress, news of it broke three days after the trip and cast a shadow on what had been billed a successful visit. Similarly, Vigano's letter was published on the pope's final day in Ireland. 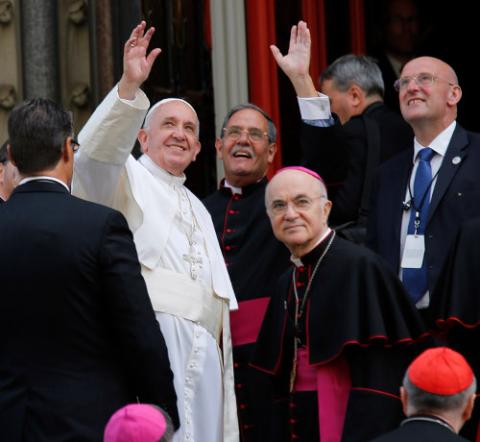 Pope Francis and Msgr. Salvatore Criscuolo, pastor of St. Patrick in the City Church, wave as the pontiff arrives at the church in Washington Sept. 24, 2015. Also pictured is Archbishop Carlo Maria Vigano, apostolic nuncio to the United States. (CNS/Bob Roller)

"It almost seems designed to upstage the pope, to weaken the pope publicly at a moment when he is trying to send a much different message," Thavis said of the timing of the two events.

News reports later portrayed Francis as furious with Vigano over the Davis meeting, and immediately summoned the ambassador to Rome. Four months after submitting his resignation in January 2016 as mandatory at age 75, Vigano was replaced by French Archbishop Christophe Pierre.

In July that year, Vigano's name surfaced in documents disclosed as part of a criminal investigation into the St. Paul-Minneapolis Archdiocese: A memo from the archdiocese's delegate for safe environment alleged that as nuncio Vigano in April 2014 ordered two auxiliary bishops to quickly wrap an inquiry into alleged sexual misconduct with adult men, including seminarians, by Archbishop John Nienstedt.

According to the memo, written by Fr. Dan Griffith, a St. Paul law firm's investigation into the allegations found "compelling" evidence against Nienstedt, and archdiocesan officials were in agreement that the archbishop should resign. After auxiliary bishops Lee Piché and Andrew Cozzens relayed the findings to Vigano, the ambassador allegedly spoke with Nienstedt, who, the memo said, "may have convinced the Nuncio that the allegations against him were all false" and part of a conspiracy in response to his opposition to same-sex marriage.

The memo stated that Vigano then ordered the investigation wrapped quickly and for the auxiliary bishops to destroy a letter they wrote him objecting to his decision and stating it "would rightly be seen as a cover-up."

In a statement issued to Catholic World Report and several other outlets Monday, Aug. 27, Vigano pushed back against the memo's claims, writing "These accusations — alleging that I ordered the two Auxiliary Bishops of Minneapolis to close the investigation into the life of Archbishop John C. Nienstedt — are false." 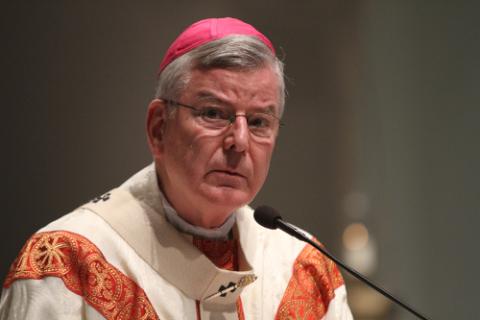 Vigano said that he suggested to Piché and Cozzens that Nienstedt be interviewed before the investigation explored a claim he had an affair with a member of the Swiss Guard. He added he did not order any document destroyed but rather instructed Piché "to remove from the computer and the archdiocesan archives" the bishops' letter to him "falsely asserting that I suggested the investigation be halted."

After news reports on the memo published, Vigano said he was informed the pope directed the U.S. Nuncio Pierre to begin an investigation into his conduct immediately and reported to the tribunal in charge of judging bishops for possible cover-ups of sexual abuse. Vigano said Jeffrey Lena, an American attorney working for the Holy See, found documentation at the Congregation for Bishops "proving that my conduct had been absolutely correct," with Lena and the U.S. Apostolic Nunciature both writing reports exonerating Vigano.

He added that he informed the Vatican Press Office, Pierre and Twin Cities Archbishop Bernard Hebda about the reports but did not hear back from them.

As for Vigano's latest letter, church historians see it as a continuation of longstanding backstabbing and infighting within the highest ranks of the church but within a new context: That is, open, where the wider Catholic community watches it play out publicly in real time.

"It's as if the Borgias and the Medicis had Twitter accounts," said Christopher Bellitto, a professor of church history at Kean University, in Union, New Jersey.

Bellitto described the history of early church councils from the fourth to the seventh centuries filled with "accounts of people shouting at each other, throwing things at each other, wrestling with each other, pulling each other's beards." Many of Paul's letters, he added, amount to pleas for early Christians to stop fighting with each other. At one point during the Great Western Schism, in the late 14th century, skirmishes broke out between militaries aligned with the pope in Rome and the pope in Avignon, France.

Like with many past church rows, the letter from Vigano amounts to a struggle for power, he said.

"It's as if the Borgias and the Medicis had Twitter accounts."

"The bigger narrative here is that Vigano is actually demonstrating exactly what Francis says is the major problem, which is clericalism," Bellitto told NCR.

Faggioli, the Villanova theologian, viewed Vigano as taking advantage of divisions in the U.S. church regarding culture wars and the Francis pontificate, as well as Catholic media fueling those debates, to settle personal scores.

"His beef really is with the Vatican that expelled him in 2011 doing two things: The first, denying him the red hat of a cardinal; and second, expatriating him to the United States," he told NCR.

While Bellitto said that Vigano is playing an old game, he viewed Francis' declining to comment on the letter in response to questions aboard the papal plane as the pope's refusal to engage.

A version of this story appeared in the Sept 7-20, 2018 print issue under the headline: Who is Archbishop Carlo Maria Viganò?.