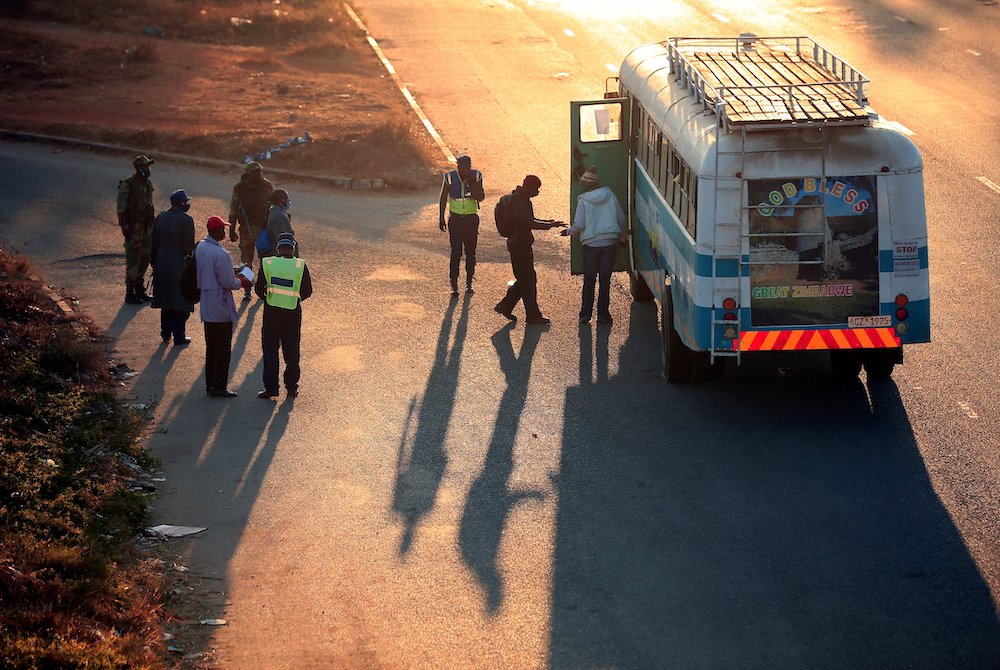 The Catholic bishops of Zimbabwe have experienced a stinging rebuke from the country's government after releasing an Aug. 14 pastoral letter criticizing a crackdown on dissent and alarming levels of corruption in the southern African nation.

The bishops, however, say they hope their letter can help jolt the crisis-ravaged country into a national debate to find solutions amid growing calls for dialogue between the major political players.

Zimbabwean citizens, human rights activists and the main opposition party have spoken out against alleged rights violations under President Emerson Mnangagwa's government. This was after the government allegedly used security forces to quash planned July 31 protests against its policies on the pretext of coronavirus lockdown measures.

Zimbabweans have quickly found a way to otherwise vent their frustrations, taking to social media to speak out against the alleged violations and corruption involving state officials.

The Zimbabwe Catholic Bishops Conference (ZCBC) now says it wants the nation to have a hard reflection on developments of the past few weeks. This, say the bishops, will enable the country to find effective solutions.

Against the backdrop of a mounting crisis, opposition leader Nelson Chamisa called Aug. 25 for action against the government, while organizations such as Zimrights have also voiced concern about extrajudicial killings as well as police shootings of ordinary citizens that they say exhibit "disregard for basic human rights."

Zimbabwe's dire situation is currently worsened by the COVID-19 pandemic, poor economic performance and continuing questions about the legitimacy of Mnangagwa's 2018 election.

"The preferred way forward is to see the pastoral letter initiating a process of engagement, dialogue and transformation," Fr. Frederick Chiromba, secretary general of the bishops' conference, told NCR in an interview.

The bishops' pastoral letter was deeply reflective of what Zimbabweans have been saying on social media using the hashtag #ZimbabweanLivesMatter.

The pastoral letter said the struggle in Zimbabwe has "resulted in a multi-layered crisis of the convergence of economic collapse, deepening poverty, food insecurity, corruption and human rights abuses."

"The call for demonstrations is the expression of growing frustration and aggravation caused by the conditions that the majority of Zimbabweans find themselves in," said the bishops. "Suppression of people's anger can only serve to deepen the crisis and take the nation into deeper crisis."

The aftermath of the release of the bishops' letter has seen many Zimbabwean and regional Catholic movements and other Christians offer support for the prelates.

For example, Zimbabwe's Jesuits said in an Aug. 20 Twitter post that the bishops had addressed "concerns of the Zimbabwean people on government's serious violation of human rights, corruption, and lack of direction in solving the country's problems."

"As the tension increases in the country following the government's attack on #ZCBC, several religious and non-religious organizations have stood out to stand with the Church and rally behind the Bishops' pastoral statement," the Jesuits tweeted.

Catholic followers have also thrown their weight behind the Zimbabwean bishops, also taking to social media platforms such as Twitter and Facebook and using the #IstandWithTheCatholicBishops hashtag. Catholic lawyers and other professionals also voiced their support in the aftermath of the attacks on the bishops by the government.

"Now the Catholic bishops are also an enemy of the state just because they spoke out against the crisis in Zimbabwe," said 25-year-old Miriam Muzorori, a shop attendant in central Harare who is Catholic. "I don't know what kind of leadership we have in this country where everyone who critics the leadership is branded an enemy of the state."

Chiromba said the bishops' conference has not yet met after the release of the letter to deliberate on the response from the government, but that it is aware of the support it has been receiving in light of the government's attacks. 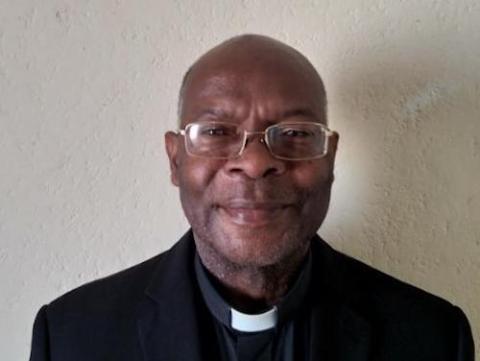 "The conference has not met so far to reflect on the aftermath, but the solidarity, both local and international, is overwhelming," said Chiromba. He added: "ZCBC is prepared to participate and contribute fully to political dialogue and resolution of the Zimbabwe situation."

Although Mnangagwa has committed to working with the church, he has not shied away from attacking the bishops. Some of his ministers have even labelled the Zimbabwean Catholic bishops as evil. The Zimbabwean leader said Aug. 19 that his administration "remain[s] committed to working well with the church to advance the national development agenda."

But Mnangagwa also threw down a gauntlet. "It is most unfortunate when men of the cloth begin to use the pulpit to advance a nefarious agenda for detractors of our country," he said.

Individual bishops told NCR that they stood by what they had detailed in their letter and that they had anticipated criticism from some circles.

One bishop, speaking on the condition of anonymity for fear of government reprisal, said the Zimbabwean church would be guided by the pursuit of justice and national peace building.

"Criticism in the aftermath of the pastoral letter was expected because these are uncomfortable truths, but the church also has a duty to intervene and contribute to peace building and to say things as they are," said the prelate.

"This will always guide our interventions and we would be more than willing to participate in finding solutions through dialogue, which we firmly believe in as a tool to resolve the crisis our country finds itself in," he said. 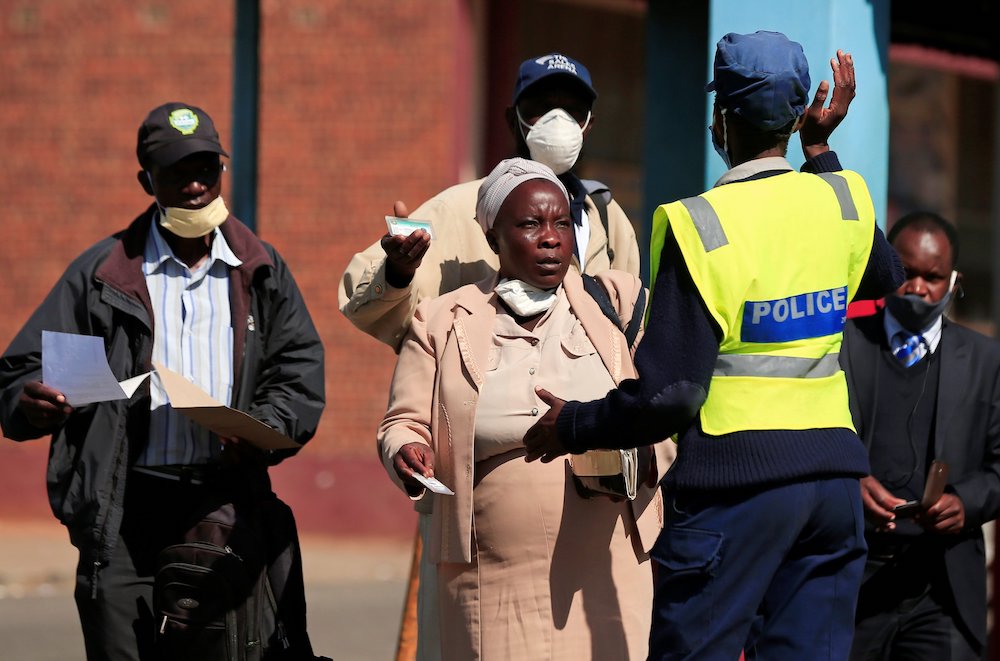 A police officer turns away people from the city center ahead of planned anti-government protests in Harare, Zimbabwe, July 30. (CNS/Reuters/Philimon Bulawayo)

An official at the Catholic Commission for Justice and Peace in Zimbabwe, a non-governmental organization, told NCR that the bishops were now hoping to work out a solution with the government, especially after the recent criticism and name-calling.

Paul Muchena, the commission's national coordinator, said his group is continuing with peace-building programs, in which they bring together youths from rival political parties to dialogue on key issues. He said the organization hopes this helps end some of the political violence.

The commission has also teamed up with Silveira House, a Jesuit-run social justice center.

"We [are] revamping the political framework through our interface with youth leaders from political parties," said Muchena. "All our work comes under human rights prevention and protection, especially on how security personnel engage civilians publicly."

As the Catholic bishops deliberate on the aftermath of the release of their letter, the Zimbabwean crisis appears to be worsening, making urgent any interventions they may have to make.

The Anglican Council of Zimbabwe stressed in an Aug. 26 communique that the issues raised by Zimbabweans and stressed by the Catholic bishops have to be "attended to and resolved."

This came amid numerous arrests of journalists and activists for social media posts deemed subversive of the government. Shingi Munyeza, a prominent critic of the government, said he was unable to speak at a planned Aug. 25 conference due to intimidation from pro-government individuals.