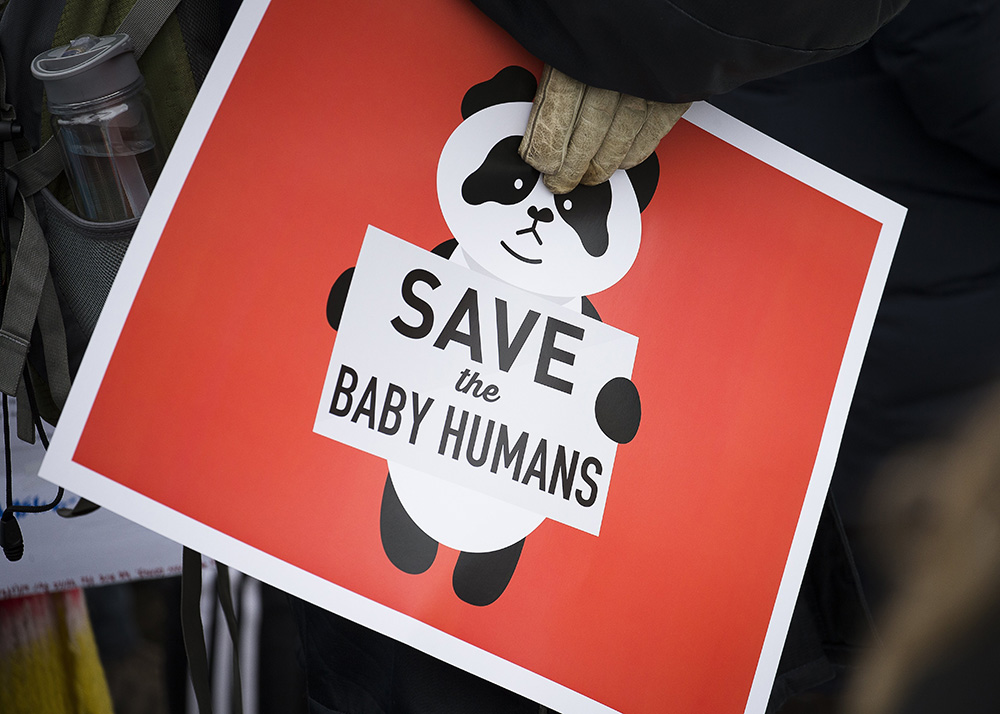 A pro-life sign is displayed during the 2019 annual March for Life rally in Washington. (CNS/Tyler Orsburn)

Today is the annual March for Life, and that fact leaves me thoroughly depressed. Thousands of Americans, rightly concerned that abortion is an infamy in our day, participate in the annual march, many of them good and large-hearted people, most of them Catholics. Because of the pandemic, this year's march is virtual, but that is better than last year's march, which was a counter-witness to the Gospel of life because Donald Trump became the first president in history to address the group in person.

How to say this gently? The pro-life movement is the worst thing to happen to the pro-life cause. Aligning themselves with that moral grotesquerie of a man stained a movement that had already miscalculated and misjudged the culture in which they sought to make a difference.

It is no sin to be politically naive, but it is a sin to be morally irresponsible on behalf of a morally upright cause. Long before Trump disgraced the nation, the pro-life movement had become embedded in a kind of conservative politics that seemed incapable of exercising solidarity on behalf of anyone who had already been born. Only the unborn moved them to empathy.

Pope Francis has been crystal clear that the West's indifference to the vast number of unborn children killed in abortion is a prime example of what he rightly condemns as a "throwaway culture." But you can't convince anyone if you endorse that culture in every other regard and only denounce it when the unborn are tossed aside. When racism kills and maims, when climate change kills and maims, when war kills and maims, when the death penalty kills and maims, those who are genuinely pro-life must raise their voice. Cozying up to Trump was morally obscene and politically stupid.

The late Cardinal Joseph Bernardin's "consistent ethic of life" was the only viable approach that had the promise of changing our culture. It was an approach the pro-life movement abandoned.

Ah, you ask, but isn't the U.S. Supreme Court poised to overturn Roe v. Wade? Or Planned Parenthood v. Casey? Perhaps. In recent years, the decision to focus on gaining a pro-life majority on the court — call it the "Federalist Society approach" — has led to decisions that have undermined our democracy, such as the failure to confirm Judge Merrick Garland when President Barack Obama nominated him in 2016.

But even if the court kicks the issue back to the states, what then? Because the pro-life movement stopped trying to persuade people that abortion is wrong, they are completely unprepared for the backlash that awaits them, and not just if Roe is overturned. What will happen when a woman dies procuring an illegal abortion?

The leaders of the movement do not see this because they are too busy walking to the bank. As my colleague Tom Roberts recently noted:

Something in the culture will need to change before attitudes change, and attitudes need to change before the politics will change. I have no idea what that cultural change will be. As I noted in June, I used to think American society would rediscover its need for solidarity if we faced a horrible and indiscriminate threat, "something like a pandemic." Well, here we are.

None of this lets pro-choice Democrats or our new president off the hook. Joe Biden adopts a version of the Mario Cuomo "I can't force my religious beliefs on others" position. Last year, The New York Times looked at the long trajectory of Biden's positions on abortion and it indicates he, like the party, has become increasingly extreme on the issue. On the campaign trail last year, Biden said: "I'm prepared to accept for me, personally, doctrine of my church [about when life begins], but I'm not prepared to impose that on every other person."

On other issues, Biden cites Catholic social doctrine as inspiring his stances. Are we to assume that, as he does not want to "impose" his religious beliefs on others, a CEO who worships at a "prosperity gospel" megachurch will not be required to pay a $15 minimum wage if Biden manages to get it through Congress?

There needs to be some consistency about the invocation of religious sources. It is fine to have a liberal political expression of Catholic faith as it is fine to have a conservative political expression, but surely the presence of the faith element should cause a person to occasionally challenge their party, and it seems they only challenge their church.

To be clear, principles of all kinds, including those drawn from our religious beliefs, must be applied to concrete political and legal circumstances with prudence. We all choose some elements from our patrimony and not others. It is complicated, and different issues require greater or lesser degrees of morally acceptable policy alternatives.

But if Biden is going to state he agrees with the teaching of the church on such an important issue, surely his answer to why he does not fight for it should be more satisfactory. If he truly believes the unborn child is a person, surely he has an obligation to try to persuade others that those persons deserve legal protection.

I suspect Biden's thinking is simply confused on the issue and the reason he is pro-choice is that he feels a greater sense of solidarity with a woman facing an unwanted pregnancy than he does with an embryo. He knows young women who have faced the choice and could not imagine telling them what to do. I do not detect any libertarian sensibilities in Biden. Still, it is a long way from that kind of solidarity to approving late-term abortions.

I tremble for our country when I think of how God and history will judge us for getting the abortion issue so wrong, for failing to craft and support a feminism that cherishes each and every human life. I tremble, too, when I contemplate the backlash that awaits on the morrow of the Supreme Court's overturning of Roe or Casey.

It is appalling to realize that after almost 50 years of pro-life witness, the cause has been so corrupted. Appalling, too, to think of how so many millions of enlightened Americans evidence little or no concern about the issue. Lord, have mercy on us all.