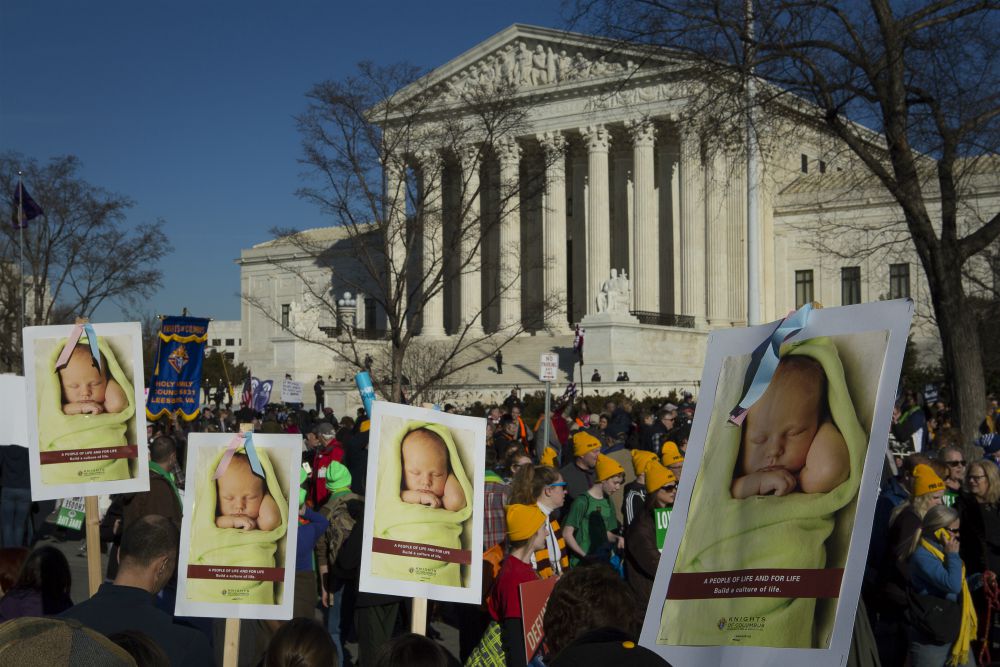 Today, tens of thousands of people, mostly Catholics, will participate in the annual March for Life in Washington, D.C. There will be a contingent from Democrats for Life but most of the marchers, and all of the speakers, will be conservative Republicans.

It is deeply regrettable, and utterly counter-productive, that the U.S. bishops have allowed themselves to become an arm of the Republican Party. Yes, they issue press releases opposing some of the president's policies on immigration, but they only really let loose when the issue is abortion or contraception. By way of example, in the face of a government shutdown over Trump's border wall, the press release, signed by the chairman of the Committee on Migration, Bishop Joe Vasquez, was balanced in tone and content. Compare it with this press release stridently denouncing a court ruling that awarded a temporary injunction against the administration's efforts to expand religious exemptions to the contraception mandate. This latter release was signed by the president of the conference, Cardinal Daniel DiNardo; the chair of the Religious Liberty Committee, Archbishop Joseph Kurtz; and Archbishop Joseph Naumann, chair of the Pro-Life Activities Committee.

Today, however, I would like to focus on the role the Catholic left has played in the sad evolution that has made the pro-life cause so partisan. In short, the Catholic left has cared less about its own integrity and more about strengthening ties with Democrats on other issues. Sloppy moral reasoning has employed narrow factoids and slim, exceptional cases to promote indifference on the issue. A libertarianism of the left on social issues has become as pronounced, and as pernicious, as the libertarianism of the right on economic issues. Both are unworthy of Catholics.

Let's start close to home. NCR has been strong in its defense of the victims of clergy sex abuse, insisting that the harm done to them was a crime as well as a sin, and that those who perpetrate such abuse must be held accountable. In the past it has regularly held up the church's teaching on abortion but questioned the political strategy of the bishops. But, did I miss our editorial this week defending prenatal children? Indeed, the last editorial this newspaper issued on the issue of abortion was deplorable. I strongly disagreed with it.

Last year, we also published a book review in which the reviewer routinely referred to one side of the debate as "pro-choice" and the other as "anti-abortion." We normally insist that writers refer to people as they refer to themselves, in which case the relevant categories would be "pro-choice" and "pro-life." But not in this instance. Why? At a time when the pro-choice movement is becoming ever more extreme, and frankly dishonest — how is it being pro-woman to defend sex selection abortions? — it is odd indeed that NCR should lose its moral compass.

I must note a happy exception to NCR's lack of attention to the issue. My colleague Peter Feuerherd filed a great story about the increasingly diverse character of the pro-life movement. The picture is worth a thousand words as well.

Liberals excoriate those who deny the science about climate change, and appropriately so. We insist, rightly, that science yields important knowledge that must be respected as such, and not subjected to ideological censors. We value education, believing that ignorance is a curse akin to a plague, and in a democracy, a lethal curse. Yet, strangely, liberals seem unable to discuss what happens in a surgical abortion. They surround the procedure in euphemisms. Yet no one can truthfully deny that abortion is a violent act, gruesome even. On this issue, and this issue only, liberals are encouraged to turn away from the reality of the thing itself.

Liberal Catholics love Pope Francis, but he has not been shy about denouncing abortion. He sees it, rightly, as part and parcel of the throwaway culture that is generally indifferent to both human life and the life of the planet in its pursuit of a lifestyle of ease for those rich enough to afford it.

I hear complaints that the Catholic Church has been so obsessed about abortion that people do not want to speak about it for fear of keeping the obsession going. But the consistent ethic of life was meant to prevent any obsession and, if followed, would achieve that end. It was not meant as a gateway to indifference on the issue of abortion. Just as it never made much sense to oppose abortion but support capital punishment, it doesn't make much sense to oppose capital punishment but keep quiet about abortion.

When I lived in Washington, I came to know many wonderful Catholics who are engaged in fighting for immigrants and for the poor and for the environment. I also came to see how few were the times when these Catholic activists were willing to challenge their Democratic allies for their indifference to the cause of prenatal children. I even listened to a priest — a priest! — once say there was something to the ACLU lawsuit that seeks to compel Catholic hospitals to perform abortions. What possible conception of liberty permits someone to procure an abortion but also compels someone to perform one against their will? This is reproductive rights run amok.

I am glad Speaker Nancy Pelosi is being stiff-necked about the border wall, but why not be bit stiff-necked about the unborn? Pelosi did have the good sense to stare down abortion rights activists who seek to impose a litmus test on all Democrats, but that is a pretty low bar. Certainly, any pro-life Democrat risks being outspent by abortion rights groups like Emily's List and NARAL Pro-Choice America.

In the present political climate, I fear that when the Supreme Court does overturn Roe v. Wade, and the issue is kicked back to state legislatures, the country will no longer be able to have the kind of important debate that Roe short-circuited. Instead of balancing the state's undoubted interest in the protection of innocent human life with a woman's right to make her own reproductive decisions, I suspect blue states will stop just short of supporting infanticide and red states will ban the procedure altogether. Nuance will go out the window, with sympathy not far behind. The country will be yet further divided.

Into this chasm should step liberal Catholics, sympathetic to the situation of women facing crisis pregnancies, insisting that there be viable alternatives to abortion for all families, deeply committed to women's rights and their liberation from every form of discrimination and domination, but never, ever forgetting that no group of human beings can ever achieve real liberation by dehumanizing other human beings, even the very little ones.