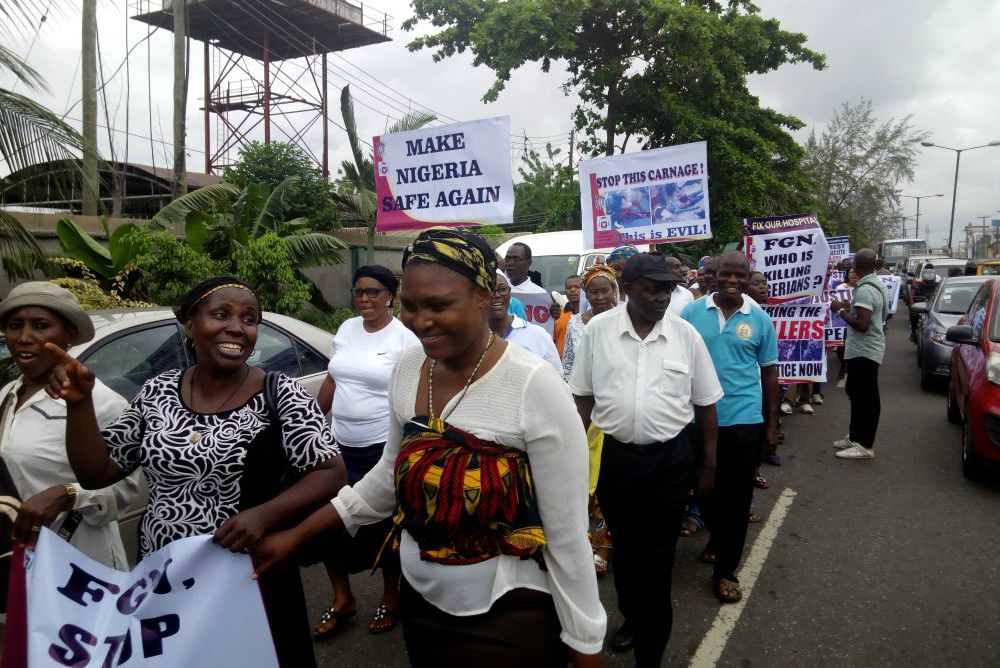 Nigerians carry placards during a May 22, 2018, protest in Lagos against the killing of innocent citizens, presumably by herdsmen, in some parts of the country. Catholics marched in various cities around the country. (CNS/Peter Dada)

Stop what you are doing. Read this essay by Carlos Lozada in The Washington Post, in which he surveys the literature on impeachment. I think he is wrong about the president's greatest offense, but everyone who detests the president's leadership must wrestle with this observation:

A failed impeachment drive could encourage the president's most dangerous impulses, and even if it succeeds, impeachment only kicks out an offending leader, "it doesn't fix the democratic decline that brought [him] to power," Tribe and Matz remind. "It doesn't undo the havoc he wreaked while in office. And it doesn't forestall the trauma of expelling him." They worry that core supporters of the impeached leader would consider his removal "a gussied-up coup d'etat" and walk away from the American project, drift toward revolutionary politics or even commit violence — "especially if the ousted president refuses to depart gracefully and instead terrorizes the polity that rejected him." And a graceful exit is hard to imagine under current management.

Relatedly, how many times have I told Democrats to stop speaking cavalierly about impeachment for fear this most grave of constitutional remedies will be seen by the public as mere partisan payback? Well, Tom Steyer, the zillionaire who has been running ads calling for Trump's impeachment for over a year, has a bigger microphone than me and, sure enough, a new Washington Post/ABC News poll shows 50 percent of the American people do not have confidence that special counsel Robert Mueller's probe will be fair and even-handed. Thank you, Tom Steyer, for making an impeachment, even if it is warranted, difficult if not impossible to pull off. A few centuries more in purgatory for the zillionaire egomaniac of the left.

We know that Tom Toles brings humor to the opinion pages of The Washington Post every day, but I am trying to figure out if Heather Long, the reporter of this story in the business section on last week's meetings in Davos, Switzerland, was trying to one-up Toles. She wrote:

But millionaires and billionaires in Davos panned the idea of higher taxes, arguing that the private sector does a better job than the government of spending money wisely.

Imagine that. I think Scott Minerd of Guggenheim Partners had it right. He is quoted in the article saying, "I think, in America, the aristocrats are out of touch."

The New York Times' Astead Herndon analyzes Sen. Elizabeth Warren's early campaign appearances and her penchant for "nerding out." Warren is one of those rare things in a politician — she has a hard time being inauthentic. So she is leaning in to the rap against her that she is a nerdy policy wonk. Not only is it smart politics, but it shapes up nicely against her Democratic rivals and against the incumbent. Besides, after decades of charisma and bromides, voters may be ready for anti-charisma and detailed policy explanations.

In the Lexington Herald Leader, in Kentucky, Bishop John Stowe asks if wearing a MAGA hat to a pro-life rally is appropriate. Of course, the annual "March for Life" in Washington is more GOP rally than pro-life rally, a few stalwart pro-life Democrats notwithstanding. I am not going to wade into the tempest in a Twitter teapot about the kids from Covington Catholic High School and their encounter with a Native American demonstrator and the other-worldly Black Hebrew Israelites. As I noted last week, wearing a MAGA hat does not mean you are a racist, but it must mean you are willing to overlook the president's racism, or, in this instance, that your parents are. The pro-life movement's aligning itself with this president will be its undoing.

Political scientist Rachel Bitecofer, in The New York Times, tells Democrats to relax because her model predicts they have the 2020 election in the bag. Nonsense. And, besides, the scenario she sketches, in which hatred of the GOP is enough to drive record numbers of Democrats to the polls, is still a horrible one: Candidates who run merely on the fact that they are not Trump have no mandate to achieve anything once elected. Governance is disconnected from the election, and cynicism has a foot in the door. Even if Bitecofer is right, I hope no one listens to her.

At Politico, Bill Scher makes a different mistake in looking at the 2020 contest, arguing correctly that it is a fool's errand to try and be "the next Obama" but incorrectly arguing that Obama's 2008 victory over Hillary Clinton was due to his overwhelming support from black voters in five southern states in which blacks are about half the primary electorate. Only two of those states, Alabama and Georgia, voted on Super Tuesday, Feb. 5, that year. South Carolina had already voted. Mississippi and Louisiana came later. But the day after Super Tuesday, the Clinton campaign had a conference call. There were a slew of small contests, mostly caucuses, for the next two weeks, and Obama's team had organized all of them, even small, GOP-leaning states like Idaho. The next big primary was Feb. 19 in Wisconsin. Clinton asked her team if Wisconsin had an open or closed primary. No one knew the answer. They had always assumed they would wrap up the contest on Super Tuesday. Clinton fired her campaign manager that day, but it was too late. Obama won every single contest for the next two weeks. Scher thinks in terms of demographics, but campaigns happen in history.

When David Brooks is good, he is really good. This essay reminds his readers that William James' colleague Josiah Royce, though never as influential as James, may be the philosopher our nation needs today. I would go further: Just as Jamesian tolerance is not enough to forge a healthy society, Roycian loyalty is not either. Replacing self-centered desire with altruistic desire still undervalues the role of reason in fashioning the common good. But in these dark days, Royce is a candle, and kudos to Brooks for reminding us of his work.

In The Washington Post, Dana Milbank writes on the unlikely resurgence of the labor movement post-Janus. I still think Janus was badly decided, but regular readers will remember that I predicted at the time that this one case might light a necessary fire under the labor movement to return to its organizing roots. Milbank demonstrates that my prediction, happily, is proving true,  and union membership is ticking up. There is no single thing that can happen in our society that should warm the heart of those committed to Catholic social doctrine than a resurgence of the labor movement in this country.

At Foreign Affairs is a grim report on the fight we never hear of, even though it is one of the deadliest conflicts in the world: The struggle between farmers and ranchers over scarce resources in Nigeria. Over 10,000 have been killed, and none of it has anything to do with Boko Haram.