Demonstrators pray outside the federal courthouse in Tacoma, Wash., March 29, 2011, during the sentencing of five anti-war activists found guilty on charges related to cutting through fences at Naval Base Kitsap-Bangor to protest submarine nuclear weapons. The five include 82-year-old Jesuit Fr. Bill Bichsel of Tacoma, another Jesuit priest, a woman religious, a retired teacher and a social worker. (CNS/Mike Penney)

Jesuit Fr. Daniel Berrigan, one of the originators of the Plowshares movement, was once asked by NCR if "all of the courtroom-as-social-theater" had not become outdated and ineffective.

"Well, we hear that all the time about this repetition, let's say, of the Plowshares actions all over the place — and I don't know," replied Berrigan, who died in 2016. "The only answer I can muster is, 'You know, if you have a better way, I wish you'd tell us and I wish you'd help us find that better way.' But, of course, no one does. So there we are, generally speaking. But I think behind a lot of it is the fear of that thing. It inspires a lot of dread of consequences and shakes people where they would like not to be shaken."

The name Plowshares refers, of course, to the lines in Isaiah where the prophet speaks of a world in which swords are turned into plowshares. The first Plowshares action targeting nuclear weapons was a celebrated protest at a General Electric facility in King of Prussia, Pennsylvania, in 1980. 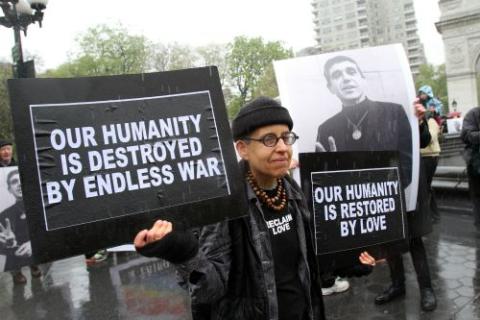 A mourner carries signs as she participates in a peace march May 6, 2016, prior to the funeral Mass of Jesuit Fr. Daniel Berrigan at the Church of St. Francis Xavier in the Greenwich Village neighborhood of New York City. (CNS/Gregory A. Shemitz)

The latest action, of more than 100 in the intervening four decades, occurred in April 2018. It involved seven Catholic peace activists who broke into a nuclear submarine base in Kings Bay, Georgia, where six Trident submarines, each designed to carry nearly 200 nuclear warheads, are based.

The group of seven, mostly middle-aged or elderly, will stand trial Oct. 21, each on charges of three felonies and one misdemeanor. One of them, Elizabeth McAlister, wife of the late Philip Berrigan, brother of Daniel, embodies the legacy of the movement seen by some as a quixotic and absurd tilting at a gargantuan windmill and by others as an authentically prophetic witness in the nuclear era.

The Plowshares movement — spilled blood, spray painted slogans and banging on implements of war with carpenters' hammers — is a non-violent movement of both symbol and personal jeopardy. No act is going to stop the development and production of nuclear weapons, but the fact of them indeed shakes us where we would like not to be shaken. McAlister and others have been disturbing the peace and questioning the presumptions of the nuclear-armed state for decades.

Courts often don't know what to do with such witness. Federal Judge Lisa Godbey Wood of the U.S. District Court for the Southern District of Georgia, considered the defendants' novel approach — they tried to use the 1993 Religion Freedom Restoration Act, arguing that they had been led by deeply held religious beliefs that were, in turn, unduly burdened by the government's action in arresting them. The judge was convinced of the sincerity of their faith and that the government had burdened that faith, but also that the arrests were justified because of the state's compelling interests in the security of nuclear weapons and protection of federal property.

Certainly compelling questions arise for the government and the military in how a ragtag band of middle aged and older protesters managed to cut through several layers of perimeter of a nuclear installation before waiting to be apprehended.

If the law can't bend in certain circumstances, judges certainly can exercise discretion in applying consequences. In this case, it appears an act of unnecessary cruelty that the judge refuses to change conditions of bond — $50,000 and an ankle monitor — that would allow the 79-year-old McAlister to leave prison.

Society of the Sacred Heart Sr. Anne Montgomery, left, who participated in six Plowshares actions to protest nuclear weapons 1980-2009, is pictured with Society of the Holy Child Jesus Sr. Megan Rice, who has been arrested about 40 times for nuclear activism, in a 2010 photo (CNS/Courtesy of Ground Zero Center for Nonviolent Action)

She is, demonstrably, a threat to no one except those whose consciences take in the truth of her witness; nor is she a threat to disappear. She's been at this with other members of the broad Catholic Worker community for a long time. NCR agrees with McAlister's fellow activist Patrick O'Neill when he points out: "Despite her legacy as a Catholic leader of the peace movement for almost 60 years, Ms. McAlister has now spent more than 500 days and nights in jail in relative obscurity; her sacrifice for nuclear disarmament unknown to most Americans." It is an amount of time that those who have seen such actions and their legal consequences over the years say is longer than time spent in prison by most who are convicted of such charges.

The church has long condemned nuclear weapons and the annihilative threat they pose. Pope Francis, in a Nov. 10, 2017, talk, said: "International relations cannot be held captive to military force, mutual intimidation, and the parading of stockpiles of arms. Weapons of mass destruction, particularly nuclear weapons, create nothing but a false sense of security. They cannot constitute the basis for peaceful coexistence between members of the human family."

In her most recent book, The Time Is Now: A Call to Uncommon Courage, Benedictine Sr. Joan Chittister says prophecy "has ragged edges. It sets out to deconstruct the present situation. It critiques social structures to which many have given their lives or in which they have status. … the ring of real prophecy lies in its uncommon courage."

This is, indeed, prophecy — real, ragged, discomfiting, and not to be ignored.

Related: Judge denies nuclear protestors' religious freedom defense
A version of this story appeared in the Sept 20-Oct 3, 2019 print issue under the headline: Listen to the prophets who condemn nukes.