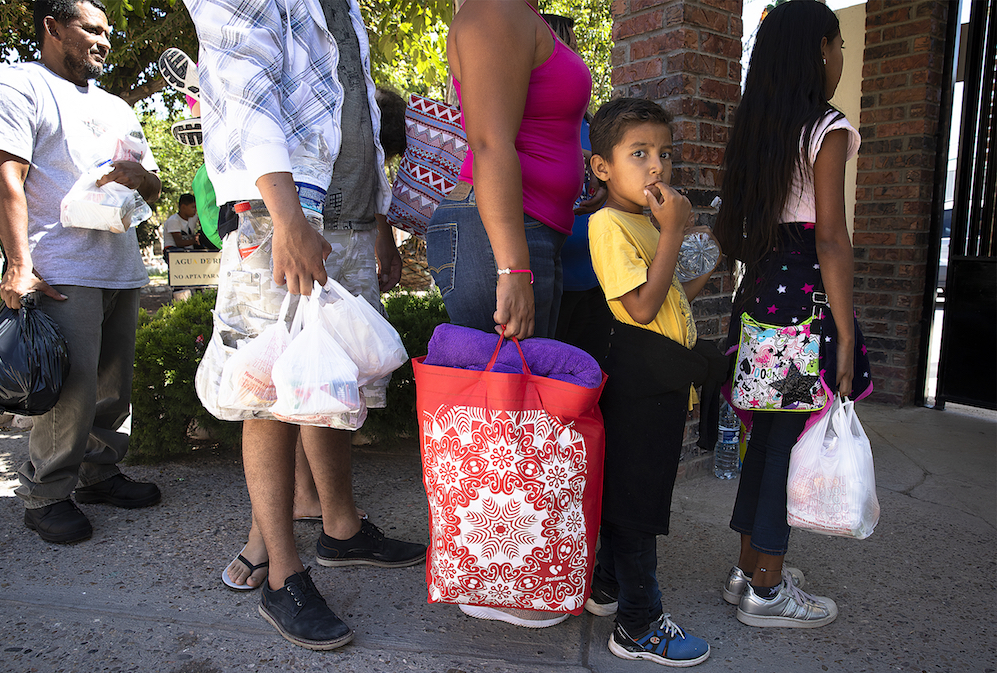 Migrants from Central America wait in line for a bus at the Casa del Migrante shelter in Ciudad Juarez, Mexico, Sept. 24, 2019. Several dozen migrants from Guatemala, Honduras and El Salvador were returning to their home countries on a bus that day, after giving up on entering the United States. (CNS/Tyler Orsburn)

Mexico is expecting another major migrant caravan to begin arriving at its southern border with Guatemala. This latest group is suspected to be between 5,000-8,000 persons and been called the "Devil's Caravan" by the media and migrants themselves. Both locals in the southern state of Chiapas and migrants are worried about what's to come.

Last week, images of the Mexican president's newly formed National Guard beating and tackling migrants on the border provoked a heated national debate with similar refrains to the ones we've heard so long in the U.S.: "We have to clean up our mess before helping other people to clean up theirs," and, "They're all criminals and rapists and drug dealers." Sound familiar?

Mexico is undergoing a major refugee crisis on its borders, and the new leftist government's response has been disappointing. The ombudsman of the National Human Rights Commission, Rosario Piedra Ibarra, has been criticized for having almost nothing to say about the most recent migrant caravans or their mistreatment at the hands of the newly formed National Guard — a militarized police force meant to protect civilians and keep order while the government of Andrés Manuel López Obrador — or AMLO as people call him here — rebuilds the nation's federal, state and local police forces, a process that has proved expensive and complex.

I spoke with Erika Guevara-Rosas, Americas director at Amnesty International, in her office in Mexico City. She told me that the National Guard is not supposed to be manhandling people at the border. "That is what the National Institute of Migration (INM) is for, a civilian organization to deal with civilians — but it takes resources and willpower on the part of the government to invest in that process." She also went on to tell me that "it's not necessarily that more migrants are coming, rather they have found a safer way to travel: in large caravans they're more protected from human traffickers and cartels, for example."

Most of the migrants are Central Americans looking to legally apply for asylum at designated U.S. ports of entry, although there are people from other countries in Africa, the Caribbean and South America, too. In Honduras and El Salvador, which are practically failed states, life has become impossible for many people because of government corruption, the climate crisis and a lack of social infrastructure to ensure the wellbeing of citizens. In Central America, violent criminal gangs like the infamous Mara Salvatrucha rape, extort and murder with impunity because local police officers are often on the gang's payroll. What's worse: the Mara Salvatrucha (commonly known as MS-13) was born and bred on the streets of Los Angeles. After some of its members were deported back to their countries of origin, they reestablished the gang in those countries and are forcing families to flee for their lives.

Mexico is a major signatory to most treaties on international human rights and humanitarian law — although that hasn't necessarily materialized into concrete actions by the Mexican government. The Mexican government has deported over 1,100 migrants, mostly from Central America, in defiance of its obligations under international law of non-refoulement, or the prohibition on refugee and asylum seekers encountering life-threatening situations.

On Jan. 20, Amnesty International sent an open letter to the National Institute of Migration, noting the organization's concerns with a lack of access to migrant detention centers. Jan. 29, the National Institute of Migration (INM) abruptly announced it had temporarily suspended access by all religious associations and NGOs to the country's migration detention centers. Hours later, the Ministry of the Interior denied that statement, and the INM posted a press release saying that only 10 pre-approved organizations would be allowed to access the detention centers starting in February.

The INM's statement didn't say which organizations, or whether the Catholic Church or Amnesty International would be allowed to access the migrants being held by the Mexican government — leaving the situation more confusing for groups looking to provide legal and humanitarian support to migrant families in detention.

Religious and civil society organizations have been major players in providing legal and humanitarian assistance to refugees and asylum seekers. In the southern state of Chiapas, Bishop Jaime Calderón Calderón of the Tapachula Diocese has been deeply involved in providing humanitarian services to migrants. In his most recent Sunday service he told parishioners, "We must not lose sight of the fact that, behind this world of opinions and positions, there are brothers suffering. Today we need more solutions than opinions."

The Remain in Mexico policy pushed on the country by the Trump administration has been devastating for Mexico and the migrants forced to stay here. Running the risk of losing the country's most important trading partner (the U.S.), the Mexican government agreed to "temporarily" house hundreds of thousands of migrants in what has become extremely unsanitary and unsafe conditions, while the U.S. systematically avoids, sabotages and ultimately denies its legal obligation under international and U.S. federal law to process asylum applications. Mexico simply doesn't have the infrastructure, or the resources, to house hundreds of thousands of refugees and asylum seekers.

A big question mark remains as to how the government will cope with the continued influx of refugees and asylum seekers in a system already overburdened with a hidden humanitarian crisis.

[Carli Pierson is an international attorney and translator.]