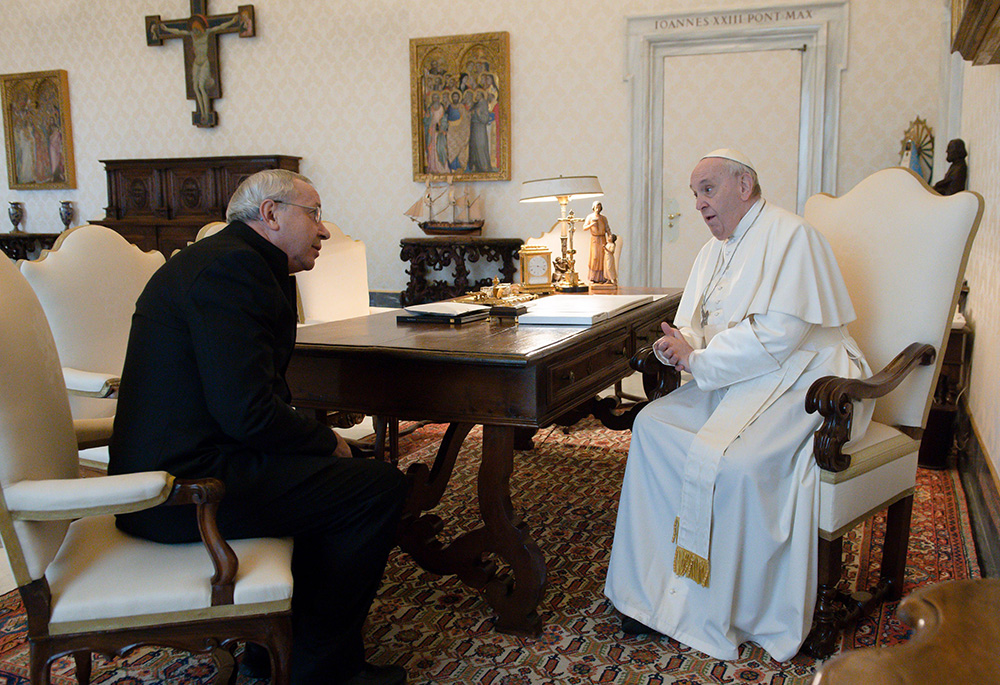 Pope Francis greets Jesuit Fr. Marko Rupnik during a private audience at the Vatican in this Jan. 3, 2022, file photo. Rupnik, whose mosaics decorate chapels in the Vatican, all over Europe, in the United States and Australia, is under restricted ministry after being accused of abusing adult nuns in Slovenia. (CNS/Vatican Media)

On Dec. 2, the global Jesuit order confirmed reports made in several conservative Italian Catholic blogs that Slovenian Jesuit Fr. Marko Rupnik, a famous Rome-based artist, had been quietly disciplined for allegedly abusing adult women, and had been barred from hearing confessions or offering spiritual direction.

On Dec. 14, Fr. Arturo Sosa, the Jesuit superior general, revealed more information. Rupnik, known in places across the world for his iconography and for mosaics in several renowned churches and cathedrals, had earlier been convicted by the Vatican's doctrinal office of having used the confessional to absolve a woman of having engaged in sexual activity with him.

That is one of the most serious crimes in canon law, and incurs an automatic excommunication. Sosa said Rupnik repented, and indicated that the excommunication had thus been lifted.

Recapping the details of the case, some may feel the usual "here we go again" with regard to sexual abuse and its cover-up in the Catholic Church. But I think the Rupnik case actually recapitulates and casts a light on new dimensions that have emerged in the abuse scandal in recent years. I want to briefly highlight 10 dimensions that I see.

The first dimension is that it is not only reporting by mainstream, secular outlets that leads to the revealing of truth of abuse and its cover-up. In this case it was conservative blogs forcing church authorities to release important information about the case and about a convicted member of the clergy who could still conceivably do harm.

Clearly these informal and often anonymously run news sources have an agenda that is larger than the truth on abuse. But they also show the inadequacy of "access journalism," or, of journalists who focus on gaining entrée into rooms inside the Vatican. They also show the inadequacy of the kind of journalism that Pope Francis often relies on. This says something about the new information climate in the Catholic Church. 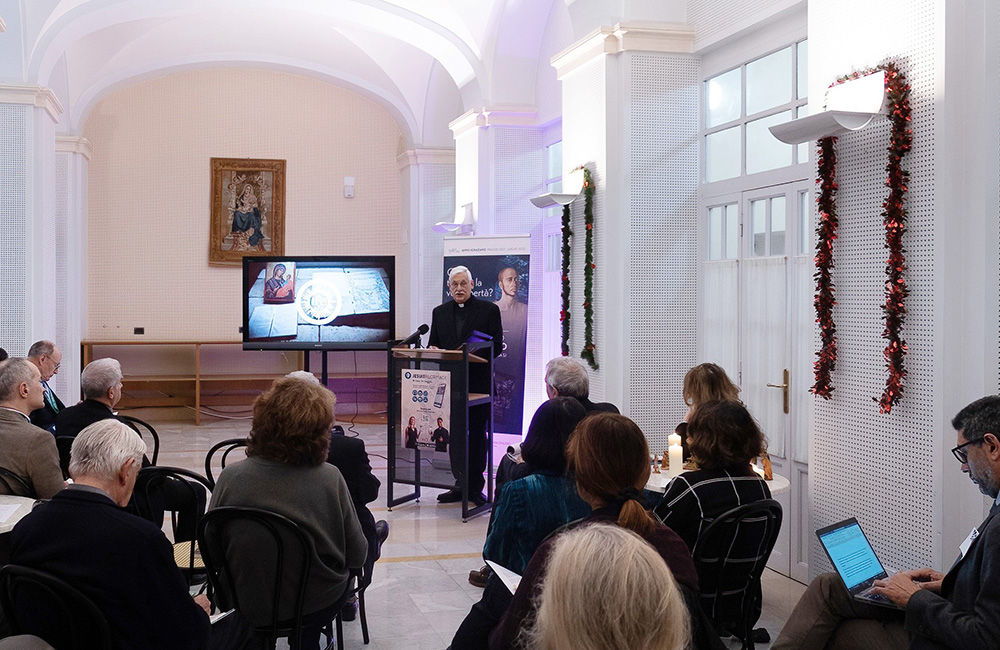 Fr. Arturo Sosa, superior general of the Jesuits, meeting reporters at the Jesuit headquarters in Rome Dec. 14, 2022, discusses the case of Fr. Marko Rupnik, a Jesuit artist who is under ministry restrictions after abuse allegations. (CNS/Jesuit Communications Office)

This is also the end of the feel-good narratives (boosted also by movies like "Spotlight," about the Boston Globe's 2002 reporting on the abuse crisis) of journalism as the hero of the story. Courageous journalists have undoubtedly changed the recent history of the Catholic Church by reporting on the scandal. At the same time, this is a much more complicated moral landscape, with many gray zones, more like the post-Christendom setting of the Irish movie "Calvary" than the Hollywood-produced, abuse-crisis version of "Citizen Kane."

The problem now is how to separate the unreported or silenced facts these blogs publish from the significant amount of slander that often makes their fame and fortune. Similar problem: how to tell professional papal laudatores that there is a need to ask not-softball questions and tell the truth, as uncomfortable as it may be sometimes, of church leaders they like and are liked by, the pope included.

Second dimension: The Rupnik case makes clear the different and overlapping concepts of crime and abuse (sexual, spiritual, sacramental, of authority) that are often all present in the same case. There is a problem of adapting the legal system to this phenomenon, but there is also a theological and cultural problem.

It is no longer acceptable to silently accept abuses or consider them as minor misdemeanors. There has been a massive reversal of assumptions on what is expected and tolerated by different kinds of church members. We are witnessing an ongoing, massive change in culture and mentalities in which the current crisis in the Catholic Church plays a central role. At the same time, this ecclesial crisis also helps many around the world understand the way they have been or are being treated. 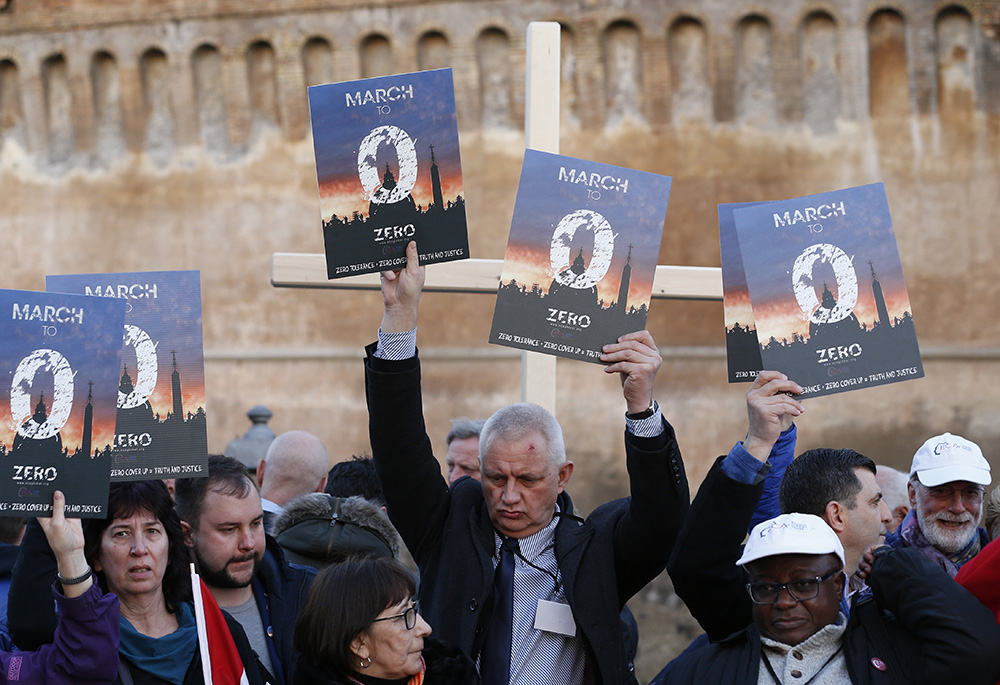 Clerical sex abuse survivors and their supporters rally outside Castel Sant'Angelo in Rome in this Feb. 21, 2019, file photo. (CNS/Paul Haring)

Third dimension: Something that is emerging is the uncertainty or uselessness of the distinction between the clerical hierarchy and multi-vocation charismatic communities, especially in a church that wants to be, in its evangelizing and missionary efforts, all-ministerial. We have come a long way from the time when this could be called the "clergy abuse crisis" — and it's surprising that some scholars are still treating this crisis as something that can be explained mono-causally with clericalism, or with the unique role of the clergy in the Catholic Church.

Fifth dimension: There are dark and shadowy areas between different jurisdictions in the church. Rupnik is a Jesuit, but the canonical process is not in the control of the Society of Jesus (rather, it is in the Vatican's control). At the same time, the Jesuits are the ones facing the fire now, also because they have much explaining to do, together with the Vatican's Dicastery for the Doctrine of the Faith. 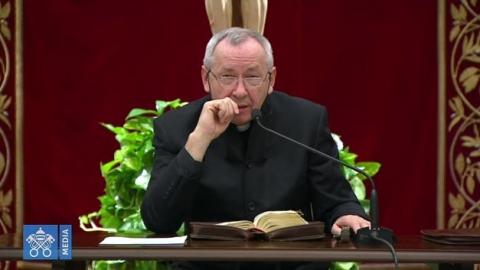 A screengrab shows Jesuit Fr. Marko Rupnik giving a Lenten meditation from the Clementine Hall at the Vatican in this March 6, 2020, file photo. (CNS photo)

This is a key element because it liberates the Jesuits from the illusion that they are somehow magically exempt from the crisis. The expectation was that the Jesuits would be different. Outside of Rome, Catholics knew the truth already. Recent U.S.-based research on the moral injury of sexual abuse found that "Jesuit institutions are still marked by clericalism, which proves an obstacle to the transparency, accountability, and equitable power-sharing."

There was clearly a Jesuit abuse crisis and cover-up in the U.S., and now it has evidently come to Rome, during the pontificate of the first Jesuit pope. Now it is clear that no ecclesial reality can be considered a virtuous exception. As an aside, the Society of Jesus has become one of the last in the church to know how to "couvrir la couronne" ("protect the highest authority"), but this will have a cost. This will complicate further the already difficult history of relations between the Jesuits and the papacy.

This is part of the sixth dimension. This case emerged during the second phase, or a declining moment, in Francis' pontificate, close to the 10th anniversary of the pope's election in March 2013. While I believe that these revelations also hurt Francis, I do not believe for a moment that they can be reduced to a conspiracy against the pope. This kind of whataboutism does not help the church and the pope.

From an historical point of view, the ecclesial context is one of mounting tensions and frustrations of women against a much-beloved pope because of the clear inadequacy and inconsistency of what he says on women, the language he uses about women, women's theology and women's role in the church. It is striking to see how the fact that adult women were Rupnik's alleged victims apparently made this case a less scandalous one to the Vatican or the Jesuits, after a number of female victims were not listened to or were reluctant to come forward after they saw the way other women were treated.

This brings us to a seventh dimension: the inadequacy of the idea of one monolithic ecclesiastical system versus one monolithic milieu of victims' and survivors' advocates. There are very different ways to advocate for justice for victims and survivors: Some ways are close to the institutional church and the pope (in different ways), and some ways fundamentally see the church as a criminal organization working just to enable and cover-up systemic and systematic abuse.

For now, we should focus on the different ways the institutional church can deal with abuse — both within the Roman Curia, but also within the Society of Jesus. Admittedly, in the Curia things are more surreal in this case. There is the unclear and potentially marred role of the Pontifical Commission for the Protection of Minors, moved by Francis' recent reform of the Vatican bureaucracy under the roof of the Dicastery for the Doctrine of the Faith. That Vatican dicastery still lists as one of its members the French Cardinal Jean-Pierre Ricard, who in November admitted to abusing a 14-year-old girl 35 years ago. It should not take much time to announce the suspension from the dicastery of a cleric who made a voluntary statement admitting that kind of abuse. 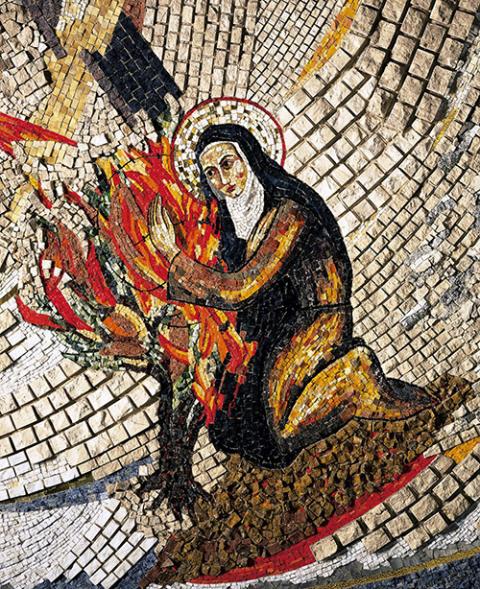 St. Edith Stein is depicted in a detail from a mosaic by Jesuit Fr. Marko Ivan Rupnik in the Redemptoris Mater Chapel at the Vatican. (CNS/Courtesy of Centro Aletti)

Eighth dimension: Rome and Italy play a role in this case that we have not seen before in the global abuse crisis. There are the Catholic circles in Rome (including the Centro Aletti, a center for artists, where Rupnik lives), the Jesuit General Curia, the Vatican, and the relations between them and all the places in Italy where Rupnik was active, revered and protected. It is worth noting that it was only on Nov. 17 that the Italian bishops presented, for the first time, an official report on clergy sexual abuse in the country.

Ninth dimension: Rupnik's artistic ministry and intellectual charisma was one of the voices of a certain Western Catholic romance with the East, something of a "beauty will save the world" narrative. In secular history narratives, what is happening in Russia and to Ukraine now should caution us against such romanticism. In terms of the history of spirituality and religious orders and communities, it is a known fact that pronounced aesthetic sensibilities, strong charismatic personalities and abusive behaviors have often gone together, with charisma (and the vocations it recruited) often seen as a blank check to pay for all the unsavory rest.

This also says something on how a certain fixation with a Catholic sense of beauty (whether Rupnik's mosaics, the prototype of the Gothic cathedral, a more Counter-Reformation baroque style or the hatred for the "brutalist" 20th-century churches) can be a cover for avoiding other issues. On the other hand, this case opens the debate on what to do with contemporary sacred art created for the church by clerics who committed crimes that were covered up also thanks to their fame, influence and charm.

Tenth and final dimension: The Rupnik case makes us understand the abuse crisis in the Catholic Church in new, more elaborate ways — deeper than the Boston Globe "Spotlight" investigations in 2002 and the case of now ex-cardinal Theodore McCarrick in 2018.

Rupnik is one of the most well-known Jesuits involved in the scandal, and crucial phases of this happened in the Vatican of the first Jesuit pope. Many contours of the Rupnik case are not clear yet, but this story is very important in the history of the abuse crisis in the Catholic Church. It marks a new peak and sinks to a new low the morale of those who have followed the crisis. At the same time, it liberates us from facile, self-serving narratives on the way to address the problem.