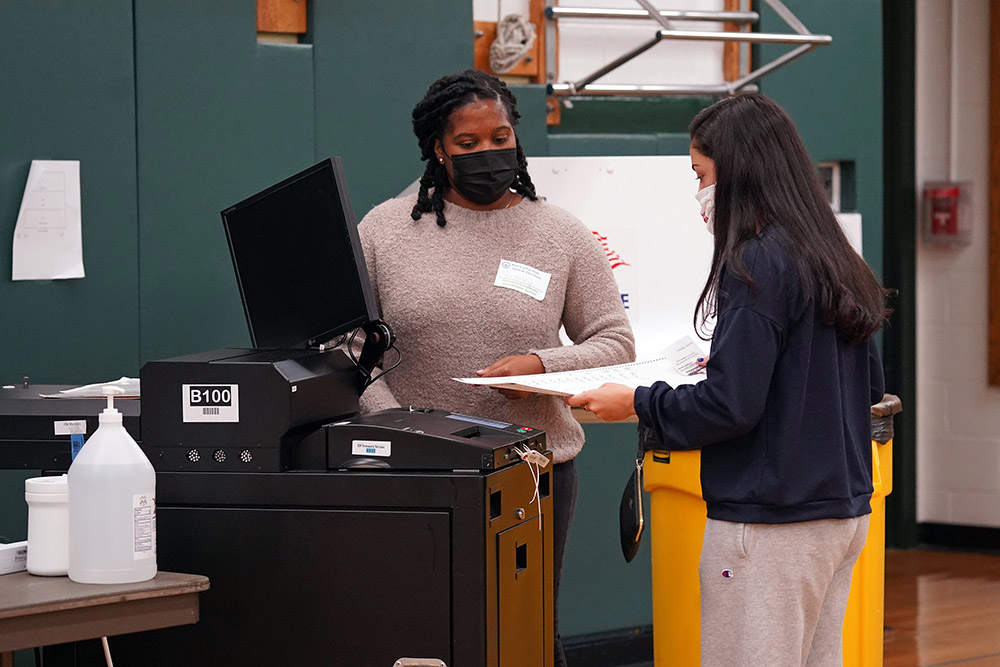 A poll worker looks on as a voter casts her ballot on Election Day Nov. 3, 2020, at William S. Mount Elementary School in Stony Brook, New York. (CNS/Gregory A. Shemitz)

Most Republicans believe Donald Trump won the 2020 presidential election; most Democrats think democracy is under attack by Republican attempts at voter suppression and intimidation.

Despite a comprehensive examination of problems at the polls, Republicans have been unable to come up with more than a couple dozen examples of illegal voting out of millions of votes cast. Republican candidates and their supporters nonetheless continue to talk about a stolen election. Some who are running for state office vow that they will, if elected, use their power to make sure that their presidential candidate is elected in 2024.

The leaders of national Catholic social justice organizations, scholars at Catholic colleges and presidents of Catholic universities are warning of the twin threats of systematic efforts to undermine voting rights and Christian nationalism. In a statement released by Faith in Public Life, these Catholic leaders say that "white Christian nationalism — an ideology heretical to authentic faith — represents a clear and present danger to building a multi-faith, multiracial democracy."

Related: Why Christian nationalism is unchristian

And yet, there are many ministers and people of faith who also side with the Republicans in this debate. Is there anything that could bring these groups together in support of democracy?

There are at least two things that could unite these groups.

First, there is the obligation to vote.

It is a fact of political life that voter turnout in midterm elections is lower than in presidential elections, even though the midterms decide who will serve in important local, state and federal offices. Christians are obliged to be good citizens, and voting is a requirement of good citizenship. I would go so far as saying it is a sin not to vote. Faith leaders should remind their people of their obligation to vote without telling them how to vote.

Second, everyone should agree that elections should be fair. Honest and unbiased poll workers are essential to democracy. Too few poll workers leads to long lines on Election Day, and poll workers who are partisan hacks also can undermine democracy.

Just as churches offer their facilities as polling places, religious believers should step up and become poll workers. They should do it with a firm conviction that discrimination, lying and stealing are sins in any circumstances, and making it difficult for some people to vote, stealing votes and lying about election results are especially serious sins. As poll workers, Christians are obliged to follow their values, not their partisan preferences.

It is time for believers to do their civic duty by becoming poll workers.

Since the 1920s, the League of Women Voters has been a nonpartisan, grassroots force for fair elections. Their local chapters can help anyone learn how to participate. The U.S. Election Assistance Commission also has information on how to become a poll worker.

Because of the partisan divisions over the electoral process, it is especially important this year that people of integrity participate as poll workers. It may also require people who have the courage to stand up to partisan bullying. If this year's elections are challenged, we will need people known for integrity in their communities to testify to the legitimacy of the results.

People of faith — which likely means you — should be among those people.