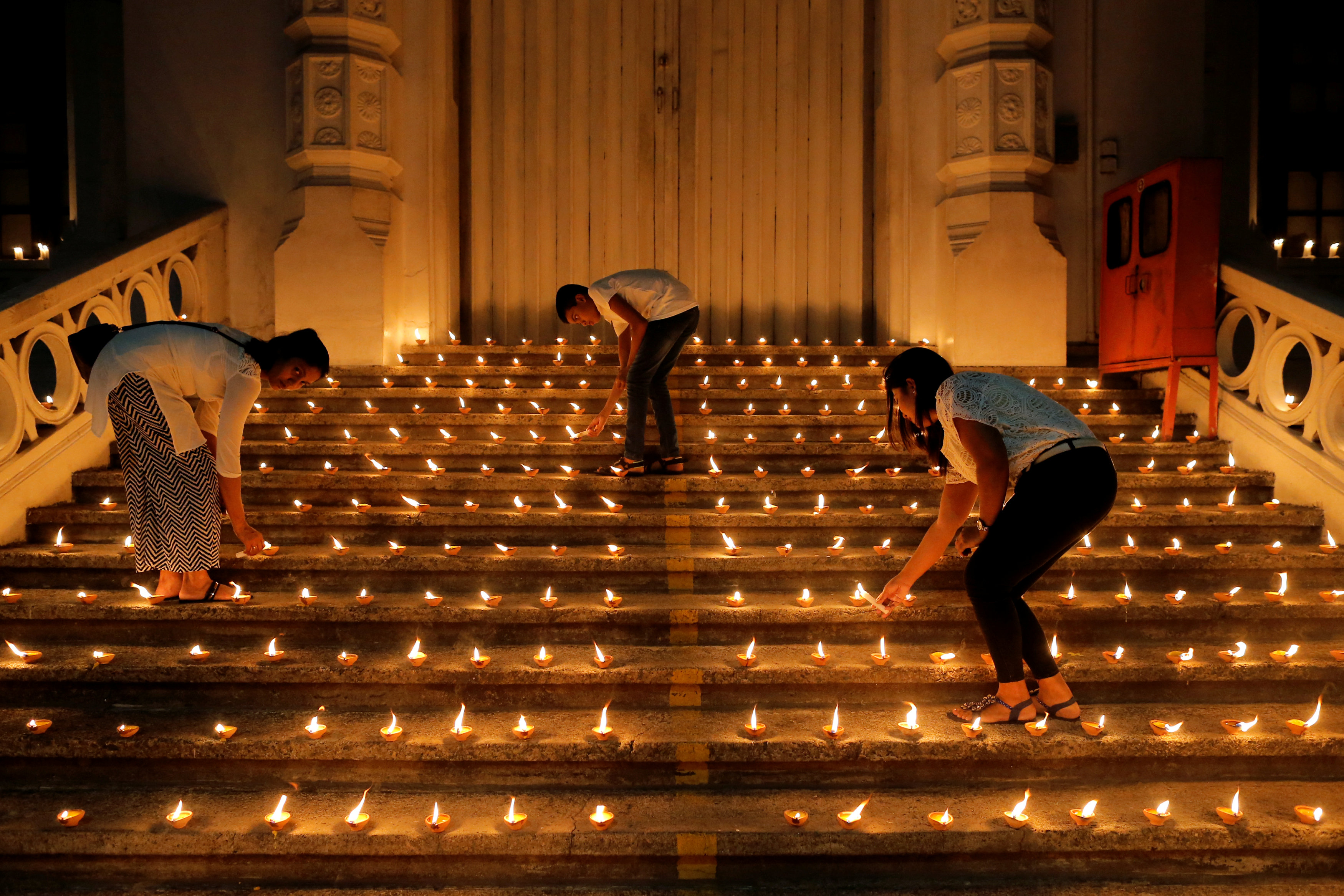 Young people light candles near the closed door of a church in Colombo, Sri Lanka, April 28, 2019, during a vigil in memory of the victims of a string of suicide bomb attacks across the island on Easter . (CNS photo/Reuters/Thomas Peter)

You may be aware that my first name is Thomas. Every time I read that Gospel I feel a little bit unappreciated, I guess, because people still call Thomas the apostle “Doubting Thomas” over 2,000 years now. I read a commentary last week where the author said, “Thomas is known for his doubt.” What about after that? He became right at that instant a believer and he spent his life spreading the good news. According to tradition, he went as far as India to spread the Gospel message. We should call him “Believing Thomas” and forget that doubting part.

The Second Sunday of Easter

I only mention that because sometimes, even when people have moved past some bad spot in their life, we think of them about what they have done wrong instead of remembering how they’ve changed. Once in a while we need to remind ourselves of that, I think. But the most important part of these lessons today, though, is what we want to reaffirm about our own belief in the resurrection and to deepen, strengthen that belief.

If we listen deeply to the Gospel and the other lessons today, I think that will happen. First of all, put yourself in the position of those disciples on that Easter Sunday night. You remember just a couple days before when Jesus had been tortured, put to death, those disciples fled, ran away. They weren’t there to support him except for three women and the one disciple, John. They not only ran away, they went against his teachings.

You remember in the garden, Peter, when Jesus was being arrested, had raised a sword and cut off the ear of the high priest’s servant. Jesus had to say to him, “Peter, put away your sword. Those who live by the sword will die by the sword.” Peter hadn’t heard the message of Jesus very well and he was still acting with violence. Later on, when he was challenged by a servant girl, “Aren’t you one of his followers?” “No, no!” he cries out, and three times he denies Jesus. We remember all of this very well.

The other disciples, perhaps not as blatantly as Peter, betrayed Jesus, gave up on Jesus, and ran away. When they began to hear those rumors on Easter Sunday about some women who had seen the Lord, they didn’t know what to think. They were frightened; they were hopeful, I suppose. Gradually as the word spread that some people had seen Jesus, the disciples began to come together and gathered in that upper room where they had celebrated the Passover meal with Jesus. They had no idea what might happen. But as we heard in the gospel, Jesus comes, stands in their midst, and what’s the first thing he says to them?

These people, most of whom have failed, even sinned against his teachings, the first thing he says, “Peace be with you.” Jesus doesn’t come to punish, to challenge them for their evil ways. He comes to give them forgiveness and peace. He does it twice, “Peace be with you.” Then in a sign that reminds you of the myth of creation, Jesus breathes on them as God had breathed on that human form and gave it life.

Now Jesus breathes on them and gives them the Holy Spirit, his risen life. They share the very life of Jesus, now risen from the dead, conquering death, and giving them that same victory by sharing with them his risen life. But then he gives them a challenge. He says, “As God sent me, I send you.” To do what? The same thing Jesus had just done: to bring reconciliation, to bring peace into our life, into our world. It’s not difficult to understand how important that message is right now, to bring that message of peace, forgiveness, and love that Jesus brought.

Just last Sunday you remember what happened in those churches in Sri Lanka. Suicide bombers in three separate Catholic churches killed perhaps 300 plus people. The archbishop there this week has announced that there should be no Masses at any church except the cathedral to try to bring the whole community together. His message is one that we must forgive. There were some already planning to take revenge, but he’s trying to prevent that and rightly so because Jesus says there is no place for violence in response to violence. We must forgive as Jesus did.

We just had another — we have them almost every day — shooting in our country, terrorist attacks. So often the response is to get even; we must fight back, arm ourselves. That’s all wrong if we listen to the message of Jesus. He gives us an extraordinary power when he tells us (he’s talking to the whole community; he’s not talking to just the clergy in the Sacrament of Reconciliation) whose sins you forgive (take away — that’s what the word means; they’re gone), and the sins or evil you restrain, it will be restrained if we follow the way of Jesus. That’s his message.

It’s true for us in every aspect of our lives — our personal lives, our community life, our national life and our life among the nations of the world — we must restrain evil, take away sin. That’s the only way we will bring peace, forgiveness and love into our world. It’s an extraordinary challenge, but that’s the challenge the risen Jesus gives to every one of us this morning. As we celebrate this Eucharist where Jesus comes among us in the sacrament of his body and blood and we share in that, we can be strengthened, enlightened and encouraged, and given the courage to live according to the way of Jesus, the way of peace, forgiveness and love.

Editor's note: This homily was given April 28 at St. Anne Church in Frankfort, Michigan. The transcripts of Bishop Thomas Gumbleton's homilies are posted weekly to NCRonline.org. Sign up here to receive an email alert when the latest homily is posted.