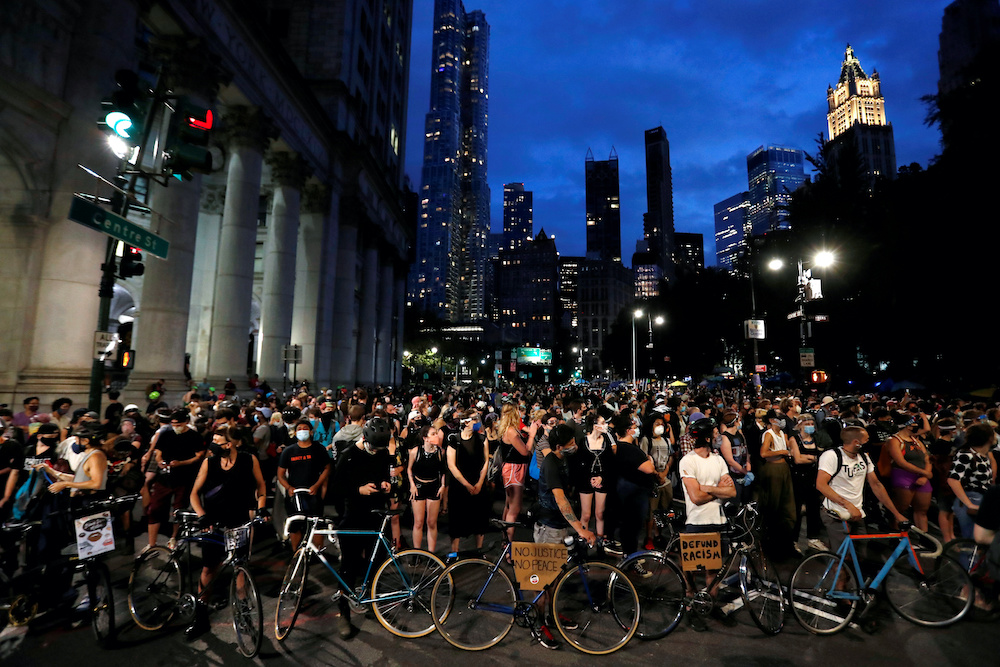 A few weeks into the protests after the murder of George Floyd, a Tracy Chapman lyric from her 1989 song "Crossroads" shook me from my housework: "some say the devil be a mystical thing /  I say the devil he a walking man." At that moment, it clicked for me: I live in a nation of white people who deny the devil within.

I don't know about you, but I grew up in a white community that was allergic to the idea of the devil. It must have been an overreaction from a different time — before I was born — of the infamous grip of "Catholic guilt." I understand that this guilt held many generations in its clutches and spoiled faith from a quest for justice, tender kindness and humility (Micah 6:8) to a fearful flight from some later inferno.

In the wake of Vatican II and other movements that exposed the deep love of God, churches gained so much — a sense of self-assurance and calm, a respect for community and an understanding that church should not exist out of mere obligation. The "devil" invented by white churches was exposed as a way to demonize people of color, colonial subjects, women, people with disabilities, people facing mental health crises, anyone deemed "deviant" or "other." I am so glad that many brave souls have begun to expose the ways in which blackness and otherness has been criminalized and demonized in white church circles.

As a white woman who grew up in liberal circles in the Pacific Northwest, I have spent recent years wondering if white liberals rejected the devil for the right reasons. To have no devil altogether was just too easy. So began my childhood, in which I learned to be kind, to "not see color," and to believe only in heaven. There were no monsters, and there was no enemy within or without. As long as I marched in anti-war protests and spoke kindly, I was fine.

Yet I never could shake a feeling that the devil was not fake, or mystical. My white spiritual community — Catholic and otherwise — celebrated this devil-free world, clearing from their shoulders what seemed a massive burden of unproductive shame and guilt and stepping into a world of freedom and privilege.

Meanwhile, Confederate monuments stood. White students in my local public schools received more attention, and Black and Latinx students received negative attention. A war began, waged on dubious grounds of weapons of mass destruction, consuming children and families and world heritage sites in its midst. Michelle Alexander joined the ranks of other activists sounding the alarms of a "New Jim Crow" system in United States prisons. White supremacists decried the election of President Barack Obama as white liberals shrugged their antics off as relics of a bygone era, as real as the bogeyman. Perhaps the allergy to Satan has gone too far and is hiding another evil in plain sight: racism, the country's original sin.

Cain can be viewed as a metaphor for white people. And Abel for black people. God is asking white Americans, especially Christians, "Where are your Black brothers and sisters?" And whites reply and respond, "We don't know. Are we their keepers?" And the Lord says, "What have you done to them for four centuries?" The blood of black people is crying out to whites from the ground in the United States of America.

Like Chapman in her lyrics above, Cone believed the devil to be real, tangible, sown into the earth of this continent and passed down through generations. He devoted his career to making visible the devil that white people had made invisible. In A Black Theology of Liberation, he writes, "insofar as this country is seeking to make whiteness the dominating power throughout the world, whiteness is the symbol of the Antichrist."

In the face of massive COVID-19 death tolls of Black and Latinx people, of police murdering people of color, what good does it do to deny evil, to deny the devil? It does no good to throw out the whole concept. Rather, we should see the devil for what he is: whiteness. White people, collectively, are possessed by this whiteness — we are possessed by a narrative of white supremacy. This possession is so deeply ingrained that even people most sympathetic to the cause of racial justice need whole books on white fragility (Robin DiAngelo) and how the antithesis of racism must be active and not passive (Ibram X. Kendi) in order to finally see how serious it is. This possession resides within whiteness, and to deny it only multiplies its harm. 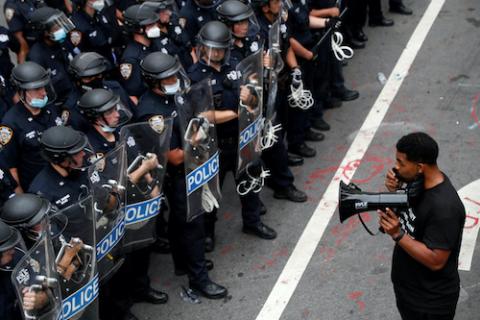 A demonstrator with Black Lives Matter talks to a line of police officers in New York City inside of an area called the City Hall Autonomous Zone July 1, 2020. (CNS/Reuters/Andrew Kelly)

In throwing out the devil, white people run the risk of throwing out the possibility for reparations, as well as the sacramental value of atonement. Fordham University professor Fr. Bryan Massingale laid out a route to this in his article for this very publication, asking white people to "stay in the discomfort, the anxiety, the guilt, the shame, the anger." He sees what many white people have ignored: sacraments are painful, are about making the divine present to us in an often-cruel society of which we are a part. To deny the pain is to deny the salve.

Too often, I have heard white friends and family members — myself included — say that atonement is too hard, too uncomfortable, too rooted in shame. But theologians like Cone and Massingale remind white Christians that there is some guilt that we must feel, for it is all too real and has been ignored for too long. Deny it any longer, and the deaths continue. Face it, process it, act based on the processing, and you are once more turning toward God.

[Rebecca Collins Jordan is an educator in New York City. Originally from Oregon, she is a graduate of Union Theological Seminary and the University of Montana.]