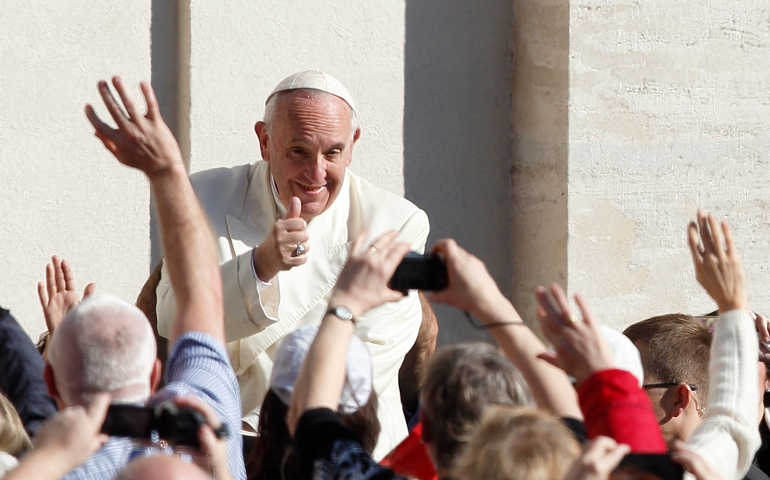 Pope Francis greets a crowd in St. Peter's Square with a thumbs up March 2. (CNS/Paul Haring)

Three years after the election of Pope Francis, Roman Catholic conservatives are growing increasingly worried that he is quietly unraveling the legacy of his predecessors.

Francis' popularity with most Catholics, and legions of non-Catholics, has given him the image of a grandfatherly parish priest who understands how difficult it sometimes is to follow Church teachings, particularly those on sexual morality.

Conservatives worry that behind the gentle facade lies a dangerous reformer who is diluting Catholic teaching on moral  issues like homosexuality and divorce while focusing on social problems such as climate change and economic inequality.

Interviews with four Vatican officials, including two cardinals and an archbishop, as well as theologians and commentators, highlighted conservative fears that Francis' words and deeds may eventually rupture the 1.2 billion member Church.

Chatter on conservative blogs regularly accuses the Argentine pontiff of spreading doctrinal confusion and isolating those who see themselves as guardians of the faith.

"Going to bed. Wake me up when this pontificate is over," Damien Thompson, associate editor of the British weekly The Spectator and a conservative Catholic commentator tweeted last month. Thompson was among conservatives stung by a freewheeling news conference Francis gave on a flight home from Mexico.

In it, he stirred up the U.S. presidential debate by criticizing Republican candidate Donald Trump's immigration stance and made comments that were interpreted as an opening to use contraceptives to stop the spread of the Zika virus.

They were the latest in a line of unscripted utterances that have left many conservatives feeling nostalgic for the days of Francis's two predecessors, Benedict and John Paul, who regularly thundered against contraception, homosexuality and abortion.

"Every time this happens I wonder if he realizes how much confusion he is causing," said a conservative Rome-based cardinal who took part in the conclave that elected Francis three years ago and spoke on the condition of anonymity. He would not say if he voted for Francis because participants in conclaves are sworn to secrecy.

The pope and the pews

Another senior official, an archbishop in an important Vatican ministry, said: "These comments alarm not only tradition-minded priests but even liberal priests who have complained to me that people are challenging them on issues that are very straight-forward, saying 'the pope would let me do this' why don't you?'"

Francis first shocked conservatives just months after his election on March 13, 2013, when he said "Who am I to judge?" about Catholic homosexuals who were at least trying to live by Church rules that they should be chaste.

He caused further upset when he changed church rules to allow women to take part in a male-only Lenten service, ruled out any campaigns to convert Jews and approved a "common prayer" with Lutherans for joint commemorations for next year's 500th anniversary of the start of the Protestant Reformation.

An important crossroads in the conservative-progressive showdown is looming and might come as early as mid-March. It could reveal how far this politically astute pontiff wants to transform his Church.

Francis is due to issue a document called an Apostolic Exhortation after two years of debate and two major meetings of bishops to discuss the family -- the Vatican's way of referring to its policies concerning sex.

The exercise, which began with an unprecedented poll of Catholics around the world, boiled down in the end to one hot-button issue -- whether divorced Catholics who remarry outside the Church can receive communion at the central rite of Mass.

Conservatives say any change would undermine the principle of the indissolubility of marriage that Jesus established.

At the end of the synod last year, Francis excoriated immovable Church leaders who he said "bury their heads in the sand" and hide behind rigid doctrine while families suffer.

The gathering's final document spoke of a so-called "internal forum" in which a priest or a bishop may work with a Catholic who has divorced and remarried to decide privately and on a case-by-case basis if he or she can be fully re-integrated.

That crack in the doctrinal door annoyed many conservatives, who fear Francis' upcoming document may open the flood gates.

Whose church is it anyway?

It is difficult to quantify Catholic conservatives. Liberals say they are a minority and reject conservative assertions that they are the real "base" of the Church.

"The overwhelming majority of Catholics understand what the pope wants to do, and that is to reach out to everyone," said another cardinal close to Francis.

Regardless of what their actual numbers might be, conservatives have big megaphones in social media.

"It really has gotten more shrill and intense since Francis took over because he seems to get only positive feedback from the mainstream media. Therefore in the strange logic of [conservative] groups, he is someone who is immediately suspect if only for that," said the Catholic blogger Arthur Rosman.

One of the leading conservative standard bearers, Ross Douthat, the Catholic author and New York Times op-ed columnist, has expressed deep worry about the long-term repercussions of the issue of communion for the divorced and remarried.

"It may be that this conflict has only just begun," Douthat said in a lecture to American conservatives in January. "And it may be that as with previous conflicts in Church history, it will eventually be serious enough to end in real schism, a permanent parting of the ways."

The last internal rupture in the Church was in 1988 when French Archbishop Marcel Lefebvre consecrated bishops without Vatican approval in order to guarantee succession in his ultra-traditionalist group, the Society of St. Pius X (SSPX).

The SSPX rejects the modernizing reforms of the 1962-1965 Second Vatican Council, including the historic opening to dialogue with other religions. While it remains a small group, its dissent continues to undermine papal authority.

The conservative standard bearer in Rome is Cardinal Raymond Leo Burke, a 67-year-old American who in 2014 told an interviewer that the Church under Francis was like "a ship without a rudder".

Francis was not pleased. That same year, he removed Burke as head of the Vatican's highest court and demoted him to the largely ceremonial post of chaplain of a charity group.

Conservatives are also worried about Francis' drive to devolve decision-making power on several issues from the Vatican to regional, national or diocesan levels, what the pope has called "a healthy decentralization".

This is an anathema to conservatives, who say rules should be applied identically around the world. They warn that a devolution of power would leave the Vatican vulnerable to the splits seen in the Anglican and Orthodox Churches.

"If you look at these two big Churches, they are not in very good shape," said Massimo Faggioli, a Church historian and associate professor of theology at the University of St. Thomas in Minnesota. "That's why conservatives are nervous. They think Francis does not understand the danger."