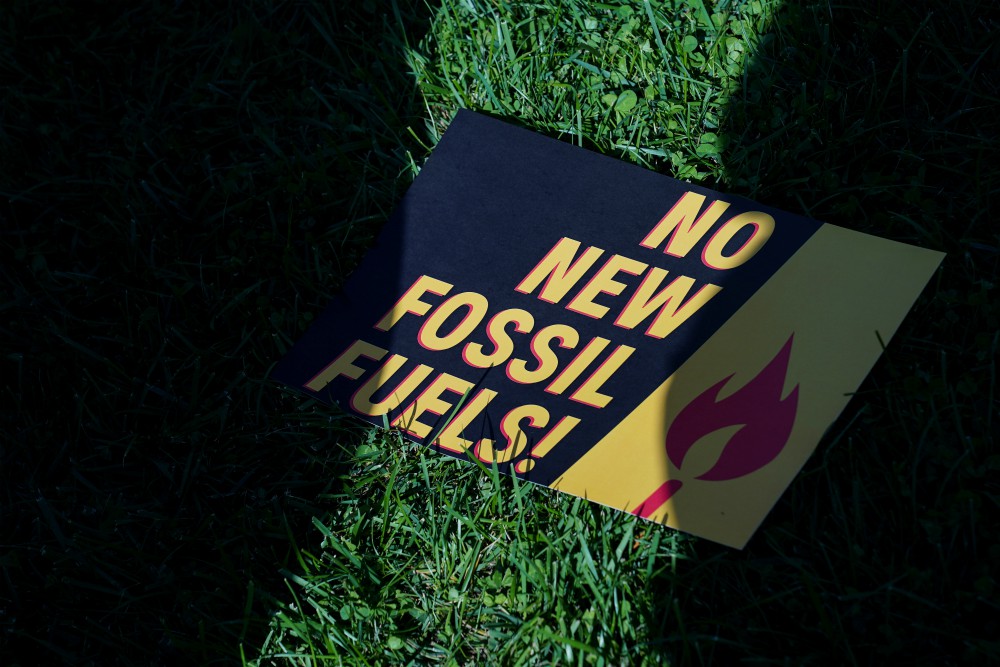 A sign protesting fossil fuels is seen on the lawn outside of the U.S. Capitol during a protest in Washington Oct. 18, 2019. (CNS/Reuters/Sarah Silbiger)

More than 40 faith institutions committed to divest their finances from fossil fuels while at the same time calling for the post-pandemic economic recovery to shift the world toward a low-carbon future.

The announcement was made from Rome on May 18, at the beginning of Laudato Si' Week, the Vatican-sponsored celebration of the fifth anniversary of Pope Francis' encyclical on ecology, "Laudato Si', on Care for Our Common Home."

A total of 42 faith organizations from 14 countries pledged to divest from fossil fuel companies or avoid such investments in the future. Organizers said it represents the largest joint divestment announcement by faith communities to date.

The institutions are a mix of Methodist, Anglican, Quaker, Buddhist and Catholic, the latter accounting for 24 of the divesting groups. Seven are located in Ireland and five in South America. They include eight lay organizations, eight religious orders, and four dioceses: the Diocese of São José dos Campos, Brazil; the Archdiocese of Semarang, Indonesia; the Diocese of Ossory, Ireland; and the Diocese of Arundel and Brighton, England.

The English diocese becomes the third this year in the United Kingdom, site of the now-postponed next United Nations climate summit, to announce its divestment plans. The Jesuits in Britain, also part of the joint commitment, pledged in February to divest their $517.5 million portfolio from oil, coal and gas companies.

Fossil fuel divestment has become one of the most high-profile grassroots campaigns to limit climate change below catastrophic levels. The carbon pollution emitted from the burning of coal, oil and gas is the primary factor driving global temperatures upward more than 1 degree Celsius (1.8 degrees Fahrenheit) since the late 1800s and the Industrial Revolution. Climate scientists have stated that driving down emissions this decade is critical to keeping temperature rise to 1.5 C (2.7 F) and preventing irreversible devastation to communities and ecosystems.

The May joint announcement was arranged by Operation Noah, a U.K.-based Christian climate group, and the Global Catholic Climate Movement, which has coordinated similar announcements since 2016 as part of its church divestment campaign.

A press release announcing the divestment decision framed it in the present context of the coronavirus pandemic, which has led to more than 312,000 deaths and has wrought massive disruption on global economies. The faith communities urged governments to pursue just and low-carbon economic recovery plans that prioritize sustainability and the well-being of all people and the environment, particularly communities at most risk to the impacts of climate change. 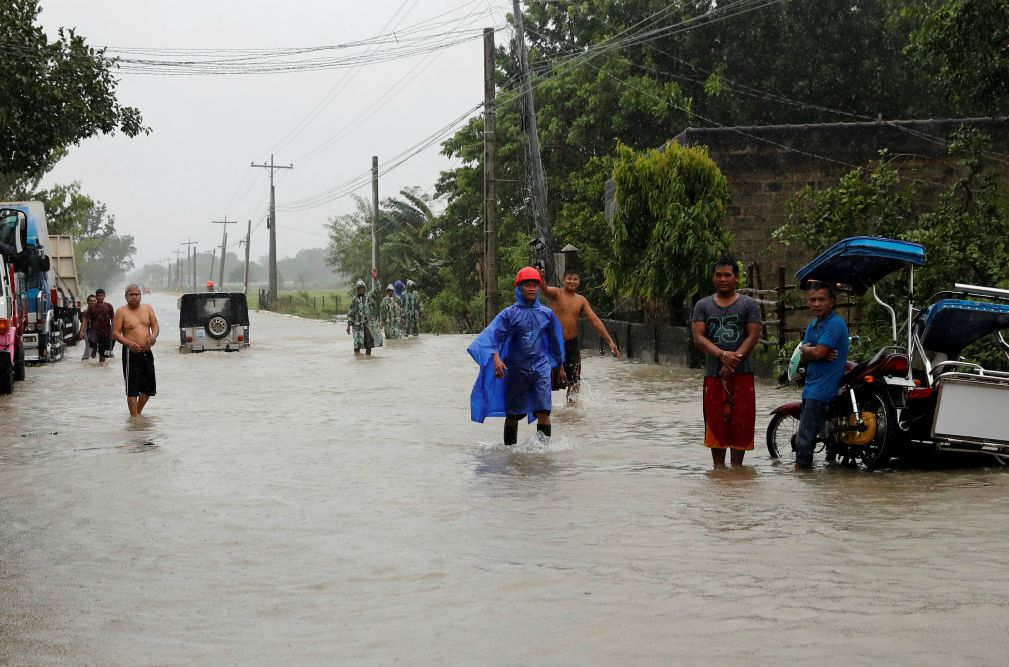 Among those pledging to divest was the Episcopal Commission for Justice and Peace for the Bangladesh Catholic bishops' conference. The densely populated, low-lying country is among the most vulnerable to climate change. More frequent flooding and rising seas threaten to displace as many as 30 million people in a country that is home to the world's largest refugee camp.

Fr. Endra Wijayanta, director of the Semarang Archdiocese's justice, peace and integrity of creation commission, said the pandemic presents "the exact time to reflect again about our way of living and building our human civilization," which for nearly 150 years has been developed through the burning of fossil fuels.

"We have to stop our ecological spiral of death. We have to revive ... ecological hope, in massive repentance of humankind, by taking the pathway to more sustainable living, and more solidarity with other creatures," he said in a statement.

On May 16, several Catholic groups were part of a coalition of U.S. faith organizations that joined the global campaign pressing the World Bank to phase out financial lending to the fossil fuel industry and shift investments to improve access to renewable power sources.

With the most recent divestment announcement, more than 180 Catholic organizations have publicly declared their intention to remove or never permit fossil fuel holdings in investment portfolios and endowments.

Since 2012, the fossil fuel divestment movement has mobilized more than $14 trillion in commitments from nearly 1,200 organizations, governments, businesses, colleges and nonprofits. Faith communities, at 30%, make up the largest share of divestment pledges.

The largest share within the Catholic groups divesting have been religious orders, representing roughly one-fifth of the pledges.

In April 2018, Caritas Internationalis, the global church's humanitarian aid network, announced it would divest. Other Caritas chapters and Catholic development agencies have done so, as well. In Ireland, Trocaire, which pledged to divest in 2016, played a critical role in making the island the first nation to end financial holdings in the fossil fuel industry. 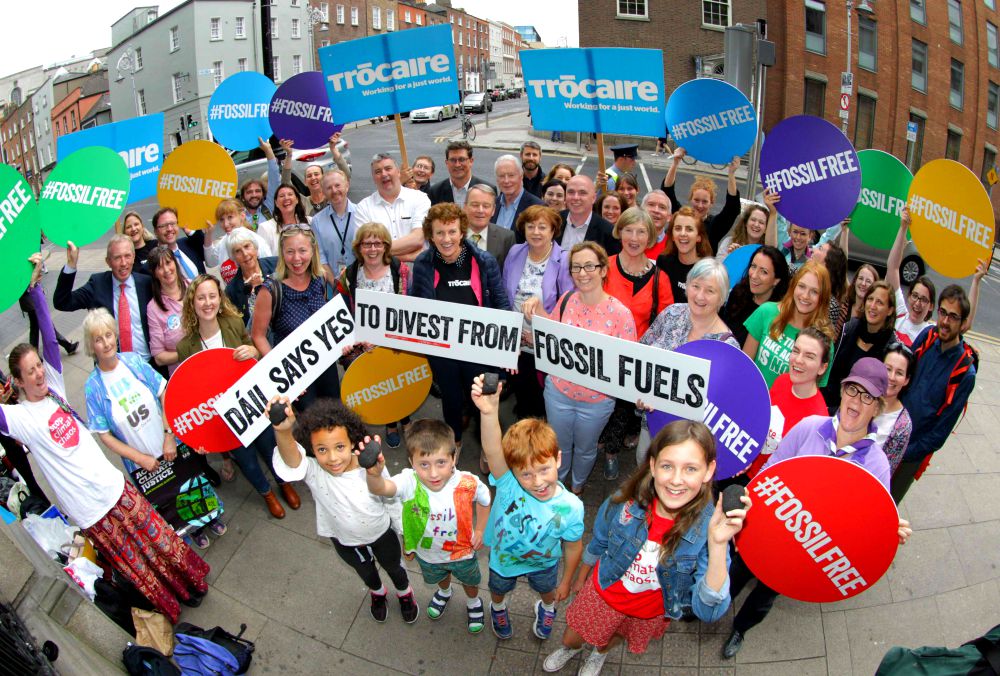 People celebrate July 12, 2018, after the passage of the Fossil Fuel Divestment Bill in Ireland. (Mark Stedman)

Roughly two dozen dioceses have committed to divestment, including the Diocese of Assisi, Italy, home of St. Francis of Assisi, the patron saint of ecology.

Earlier this year, Georgetown University became perhaps the highest-profile U.S. Catholic institution to commit to full divestment. It followed moves at the University of Dayton and Seattle University. More than a dozen student-led campaigns continue on other U.S. Catholic campuses. In February, Creighton University said it would partially divest.

In April, 22 Catholic organizations controlling a collective $40 billion in assets signed onto the Catholic Impact Investing Pledge, which commits them to "move beyond negative screening" and to seek out investment opportunities "that provide financial returns while creating measurable, positive social and environmental outcomes in service of people and planet."

No U.S. Catholic diocese has publicly announced plans to end financial ties with the fossil fuel industry. In their 2019 pastoral statement on Laudato Si', the California bishops pledged to explore opportunities to divest from fossil fuels.

While Francis did not directly address the divestment question in his 2015 social encyclical, many Catholic groups who have made the move have rooted the decision in its message.

"We know that technology based on the use of highly polluting fossil fuels — especially coal, but also oil and, to a lesser degree, gas — needs to be progressively replaced without delay," the pope wrote in Laudato Si'. He has repeatedly delivered that message, including in his 2019 address for the World Day of Prayer for the Care of Creation.

In October 2019, bishops at the Amazon synod in their final document called for the church in the Amazon to support and join divestment campaigns in relation to extractive industries and other companies causing socio-ecological damage, and advocated "a radical energy transition and the search for alternatives."

The Vatican has remained silent about any potential investments in fossil fuels held by the Vatican bank, formally known as the Institute for Religious Works. But that has not stopped calls for the Holy See to divest.

Archbishop Peter Chong of Fiji, president of the Federation of Catholic Bishops' Conferences of Oceania, in 2018 urged the Vatican bank "to consider how it, too, can play a role in the movement to divest, a movement that is giving so much hope to so many people."

At its launch at World Youth Day in Panama in 2019, the Laudato Si' Generation, a youth offshoot of the Global Catholic Climate Movement, delivered a climate manifesto to church leaders that called on bishops and church leaders "to accelerate the implementation of Laudato Si' " in part by "adopting ethical investment guidelines driving assets away from fossil fuels."

Months earlier, participants in the Vatican's synod on young people said in its final document that Laudato Si' points to a different, more sustainable economic model as possible, and it urged the church "to be prophetic in this field, through her words but above all through choices which show that financial management can be both person-friendly and environmentally friendly."

"The young feel at home in a Church where economics and finance are lived transparently and consistently," the final document stated.

The divestment campaign has ignited debate about the best approach to take with companies built off the extraction of coal, oil and natural gas: Is it better to engage them as shareholders or cut financial ties entirely?

Earlier this year, as part of an ongoing effort to align its investments with its values, NCR shifted its portfolio to management by Christian Brothers Investment Services (CBIS).

CBIS has not divested from fossil fuels, offering this summary of its reasons: "CBIS respects the decision to divest, but we believe robust and substantive engagement with companies is a more effective way to reduce CO2, emissions and create a cleaner global energy future." The organization describes its reasons in detail here.

Since NCR holdings are now blended with those of CBIS, that means NCR is also invested in fossil fuels.

The National Catholic Reporter Publishing Company has screened its investments for decades to uphold Catholic social teachings. Over the years it has avoided investing in equities related to pornography, abortifacients, violence (weapons and weapons of mass destruction), and tobacco.

The NCR Board of Directors is currently re-examining its portfolio as it considers how best to deal with the issue of fossil fuels. The board's executive committee plans to take up the subject next month.

Proponents of shareholder advocacy, including numerous Catholic and religious money-managing organizations like the Interfaith Center on Corporate Responsibility, believe that maintaining a seat at the table provides an opportunity to spur change from within, arguing that some of the same companies that groups are divesting from are themselves investing in clean energy technology. They point to successes with the tobacco industry and even some measures with energy companies.

The pope has hosted heads of the world's top energy companies at the Vatican the past two years, meetings arranged with the University of Notre Dame. He did not address the bishops' call for divestment in his apostolic exhortation on the Amazon synod, Querida Amazonia.

Divestment advocates counter that fossil fuel companies have continued to invest in new extraction projects and pipelines, even as some have committed to taking action on climate change. Supporters of the approach also highlight oil company annual reports that have indicated a divestment impact on bottom lines, and that major investment firms, like BlackRock, have said they will factor climate risks as central components of investment strategies.

A report from Operation Noah on church investments in oil companies found some of the world's major oil companies were not aligned with emissions targets under the Paris Agreement, with the industry expected to spend trillions of dollars in the next decade on new exploration and extraction projects.

Oil prices have plummeted during the pandemic. U.S. coal-fired power plants are projected to provide less than 20% of the nation's electricity this year, and for the first time produce less power than generated from renewable power sources.

Stephen Schneck, executive director of Franciscan Action Network, a part of the latest divestment announcement, told EarthBeat it was important for the faith community "to take this symbolic step" in line with teachings on stewardship of creation.

"I think in this fifth year of Laudato Si', we all have recognized that investments are moral decisions, too. And how we invest needs to reflect the values that our organizations are associated with. And Laudato Si'' made perfectly clear the connection between fossil fuels and really global devastation," he said.

Other Catholic groups in the divestment pledge were: