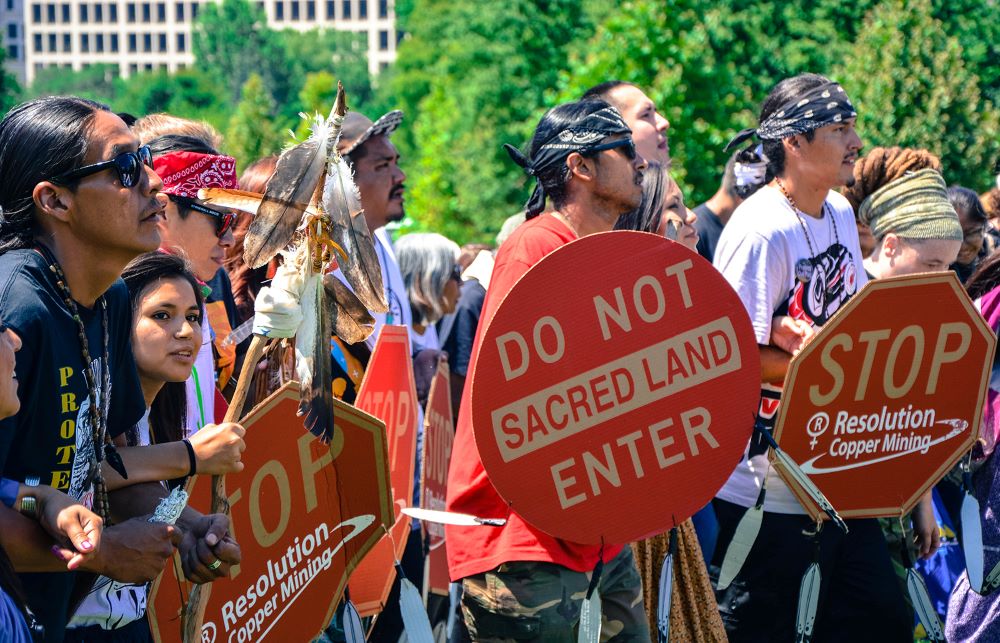 Native American activists rally in front of the U.S. Capitol in Washington to save Oak Flat, which is land near Superior, Arizona, July 22, 2015. (RNS/Jack Jenkins)

A federal appeals court will rehear Apache Stronghold's case against the United States to save the sacred site of Oak Flat, a 6.7-square-mile stretch of land east of Phoenix that a private venture is seeking to turn into an underground copper mine.

The 9th U.S. Circuit Court of Appeals announced Nov. 17 that it will rehear the case in front of a full 11-judge court instead of the original three-judge panel.

Earlier this summer, the divided federal appeals court, in a 2-1 ruling, held that the government could proceed with the transfer of Oak Flat to Resolution Copper, a company owned by the British-Australian mining giant Rio Tinto.

It ruled that Apache Stronghold, a nonprofit working to protect Oak Flat, failed to show a substantial burden on its religious exercise.

Apache Stronghold founder Wendsler Nosie Sr. said Resolution Copper's mine will swallow the site in a massive crater and render "longstanding religious practices impossible." Apache Stronghold had vowed to appeal to the U.S. Supreme Court if judges decided against rehearing the case.

"The government protects historical churches and other important religious landmarks, and our site deserves no less protection. We are glad the Ninth Circuit is going to take a closer look at this decision, and we hope it will do the right thing and protect Oak Flat," Nosie said in a statement.

Nosie has likened Oak Flat to Mount Sinai — "our most sacred site, where we connect with our Creator, our faith, our families and our land" — and has underscored how an attack on Indigenous religion — the oldest religion of this part of the world — is a threat to all religions." 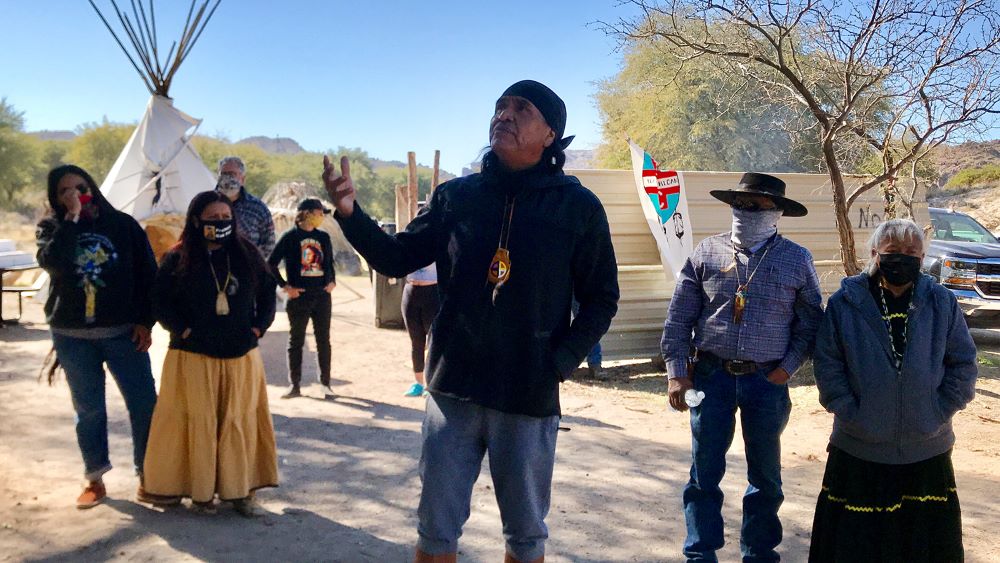 Wendsler Nosie Sr., leader of Apache Stronghold, addresses supporters of Oak Flat, including people from other Native American groups and runners who participated in a protest run in support for Oak Flat, Feb. 27, 2021, in Oak Flat, Arizona. (RNS/Alejandra Molina)

The Apache people hold a number of important ceremonies at Oak Flat, known in Apache as Chi'chil Biłdagoteel. According to court filings, the ceremonies can take place only on the site, which would be destroyed by mining. The Apaches believe Oak Flat is a "blessed place" where Ga'an — guardians or messengers between the people and Usen, the creator — dwell.

"The court now has an opportunity to correct its earlier mistake and protect Apache religious exercise at Oak Flat," said Luke Goodrich, vice president and senior counsel at Becket, which is representing Apache Stronghold. "A win for Apache Stronghold will be a win for people of all faiths."