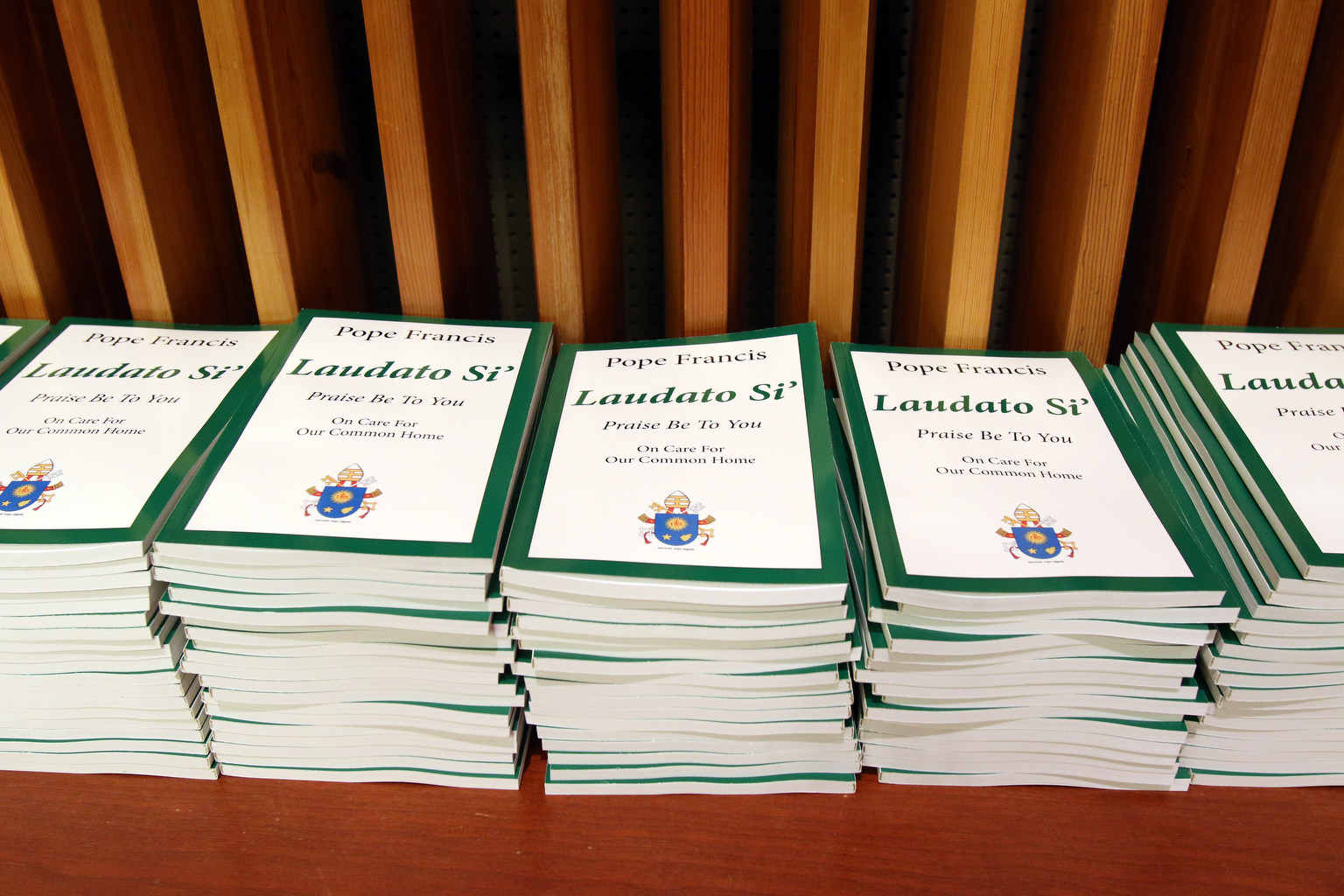 Copies of the pope's encyclical on the environment stacked up at the United Nations before a presentation about it by Ghanaian Cardinal Peter Turkson, president of the Pontifical Council for Justice and Peace, shortly after it was released in June 2015. (CNS photo/Gregory A. Shemitz)

Earlier this week, Pope Francis invited the global Catholic community to participate in Laudato Si' Week, a celebration of the five-year anniversary of his social encyclical on the environment that will unfold in Rome and elsewhere across nine days in May.

But, wait a second… you might be asking yourself right now. I thought the encyclical was released in June.

The pope's announcement presents a timely hook to look at a case of calendarial confusion in the minds of many Catholics, and EarthBeat's latest Burning Question. Reader Carla Gregorio of the Wyoming Catholic Crisis Coalition articulates what many might be wondering: "Laudato Si' was released in June 2015, I believe. Why is the anniversary celebrated on May 24, 2020?"

"Laudato Si', on Care for Our Common Home" was the first papal encyclical devoted entirely to ecological issues, and Francis' first encyclical.

It is now widely considered the compendium of Catholic teaching on creation and the environment, drawing from scores of past popes, saints, Catholic thinkers and bishops' conferences around the world. Beyond raising awareness on church teaching, it has mobilized thousands of actions to reduce human impact on the environment and preserve it for present and future generations.

Timing has always been a part of the Laudato Si' story.

Ahead of its release, Francis was forthright that its spring release was aimed to influence the United Nations climate summit later that year in Paris, where world leaders would finalize the first global pact to address climate change by curtailing greenhouse gas emissions. The conference, known as COP 25, ultimately produced the Paris Agreement.

The answer lies in the details.

If you look at the bottom of page 180 of the encyclical — its last page, in fact — you will find the words "Given in Rome at Saint Peter's on 24 May, the Solemnity of Pentecost, in the year 2015, the third of my Pontificate," followed by Francis' signature. This is the date that Francis signed the encyclical. (In case you were wondering, it was a Sunday, the day of the week when Christians traditionally celebrate Pentecost.)

But it would be another three and a half weeks before the public could actually read it. (And the official text, not a leaked copy.) The document was formally published by the Vatican on June 18, 2015.

So there are two dates associated with the publishing of Laudato Si'.

To summarize: May 24 is the publication date when it was signed and completed by Francis; June 18 is the release date it was presented to the world.

All right. Is one seen then as the anniversary?

At various times, different Catholic groups have celebrated the encyclical on either date. It likely boils down to a matter of convenience over canon.

Take for instance the Vatican.

As we know, this year's Laudato Si' Week celebration centers around the May signature date. That was true also with a climate conference it hosted last year. And on May 24, 2017, while not an official Laudato Si' event, Francis just happened to hand a copy of the encyclical to President Donald Trump (who was considering removing the U.S. from the Paris Agreement; he eventually did) during their much-anticipated state visit.

Related: Re-reading Laudato Si' ahead of the Trump-Francis visit

But the Vatican has held events closer to the June release date, too. For instance, a 2018 conference entitled "Saving Our Common Home" was held in early July and pegged to the third anniversary of the release date. In addition, the past two years the pope has met with energy and financial executives in the days ahead of the June release anniversary.

Other Catholic groups have also centered events and announcements around both dates. Early on, many coordinated initially coordinated around June, likely since that's when the public first learned of it.

In 2016, the Global Catholic Climate Movement organized its own Laudato Si' Week for the one-year anniversary around June 18. A year later, the global network of now-900 Catholic organizations also used June to kicked off its Laudato Si' Pledge campaign.

A month earlier that same year, bishops in Massachusetts released a joint appeal for climate action with other area faith leaders and scientists to mark the third anniversary of the Laudato Si' signing.

And last year, the youth-led Laudato Si' Generation joined global climate strikes on Friday, May 24, which in a coincidence aligned with the Laudato Si' signature anniversary.

So the answer is both, though the Vatican selecting May over June for the fifth anniversary celebration seems to lend more gravitas to that date for now. But don't be surprised to see other events taking place in June, too.

Both Laudato Si' dates add to the list of important days for Catholic reflection on God's creation. They join with Earth Day (April 22), a secular date though one when many parishes and schools hold eco-centered programs, and the feast of St. Francis of Assisi (Oct. 4). The latter also marks the end of the Season of Creation, which begins on Sept. 1, the World Day of Prayer for the Care of Creation — another ecological-centered date Francis has added to the Catholic liturgical calendar.

Is it unusual for the Catholic Church to celebrate a papal document in this way?

What is often the case is that the Vatican will recognize important texts around milestones: think 25 years, 50 years, or in some cases 100-plus years. Sometimes the present pope releases a letter of his own to mark the occasion and reflect on how its teachings apply to present times. For instance, in 1991 Pope John Paul II published his encyclical Centesimus annus, which marked a century since Rerum Novarum, Pope Leo XIII's own encyclical on work and labor — considered to be the foundation of modern Catholic social teaching.

The Vatican will host conferences around these anniversaries, too, as was the case in 2016 to revisit Centesimus annus 25 years after its release. The Pontifical Academies of Science and Social Sciences have been two offices that have done this frequently.

As for marking each annual anniversary for Laudato Si', that appears somewhat atypical. Perhaps part of the reason for the regular celebrations can be traced back to the urgency and importance Francis has stressed that the current state of the environment and climate poses to the planet and all its inhabitants.

"It is my hope that this Encyclical Letter, which is now added to the body of the Church's social teaching, can help us to acknowledge the appeal, immensity and urgency of the challenge we face," he wrote in the introduction.

Francis added: "The urgent challenge to protect our com­mon home includes a concern to bring the whole human family together to seek a sustainable and integral development, for we know that things can change. The Creator does not abandon us; he never forsakes his loving plan or repents of having created us. Humanity still has the ability to work together in building our common home."

In that way, Laudato Si' conveys a message that calls for reflection, and ultimately action, no matter the month.