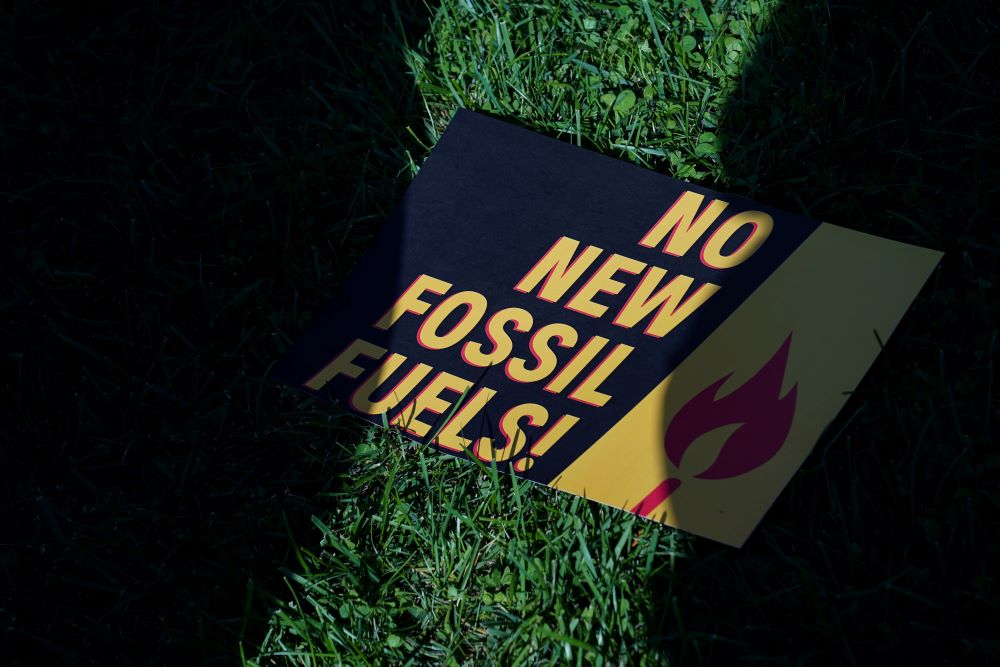 A sign protesting fossil fuels is seen on the lawn outside of the U.S. Capitol during a protest in Washington Oct. 18, 2019. (CNS/Reuters/Sarah Silbiger)

The World Council of Churches and other international faith organizations are pressing the financial industry to adopt a set of moral standards to address climate change that would steer assets away from fossil fuels and deforestation and make portfolios excluding both the default option for clients.

And they're inviting other religious congregations to join the push through their local banks and fund managers.

At least 10 groups, including Faith for Climate Network and Laudato Si' Movement, on Feb. 24 outlined five moral standards for climate finance and requested that all asset managers worldwide adopt and implement them. Among their main targets: BlackRock and Vanguard, two of the largest investment asset managers in the financial world.

As a general guide, the standards ask asset managers to measure their investment activity against the climate change goal in the Paris Agreement to limit average global temperature rise to 1.5 degrees Celsius (2.7 degrees Fahrenheit). Scientists say that exceeding that level will result in climate impacts becoming more destructive and deadly, which faith groups and others have warned will likely be felt first and worst by low-income and marginalized communities.

To meet the 1.5 C target, global greenhouse gas emissions must be halved by 2030 and reach net-zero by midcentury — benchmarks that will require the vast majority of the world's coal, oil and gas reserves to remain untapped, according to the International Energy Agency.

The moral standards advise asset managers to exclude from any investments all assets involved in the production and expansion of fossil fuels — the primary source of human-driven climate change — and specifically target the largest coal, gas and oil producers. The standards also call for avoiding new investments in heavy-emitting companies that lack short- and medium-term decarbonization and deforestation plans, and to divest within three years from companies that don't develop such plans.

At the same time, the faith leaders urge that asset managers develop and implement plans "to rapidly increase investment in climate solutions," through renewable energy, sustainable agriculture and electrifying the transportation sector. The faith leaders stressed that investments facilitate a just transition toward clean energy that maximizes job creation for low-income communities, those reliant on the fossil fuel industry and others impacted by climate change.

The standards also call for ending investments in companies lacking zero-deforestation policies and with systemic violations of human rights and the rights of Indigenous communities. They propose that asset managers draft policies requiring investee companies to respect Indigenous rights and land rights; to maintain zero tolerance for violence against land defenders; and to ensure free, prior and informed consent from Indigenous and local communities with all proposed projects.

A final standard directs asset managers to make fossil-free and deforestation-free investments "the default options for all clients and investors across all product offerings," including in index and passively managed funds.

Peter Prove, director of the World Council of Churches' commission of the churches on international affairs, told EarthBeat that the investment standards campaign is an effort to leverage the moral and financial power of people of faith — estimated cumulatively as the world's third-largest economy by the United Nations Environment Programme — to convince financial service providers that climate-solutions investing is not only an expectation of their clientele, but a demand.

"What we're trying to do [is] to encourage that global constituency of churches and individuals around the world to ask those questions of their banks, of their pension fund providers, et cetera, and to communicate thereby the client demand for climate action by the finance industry," he said.

The World Council of Churches represents more than 350 churches and 580 million Christians worldwide. Other faith-based organizations backing the moral standards include Green Anglicans, Islamic Society of North America, Hindus for Human Rights, Faith for the Climate Network and the finance-focused Operation Noah. GreenFaith, the multifaith climate network, organized the initiative, as well as several webinars Feb. 24 to promote the effort.

Rev. Abby Mohaupt, a Presbyterian minister based in McKinney, Texas, who is leading the climate finance campaign for GreenFaith, told EarthBeat that moral standards are an effort at "shifting the morality behind investments and in relationship to climate change."

"It's important for us and absolutely imperative that people of faith hold the fossil fuel industry and those who are funding them accountable and responsible, so they take right action to act ethically and to uphold the moral values that we as people of faith around the world believe in and uphold," she said.

A year ago, GreenFaith organized what it called the largest multifaith mobilization for action on climate change. As part of the day's demonstrations, they outlined 10 steps they called on governments and financial institutions to adopt to accelerate climate action ahead of the COP26 U.N. climate summit in Glasgow, Scotland.

Climate finance has been a frequent focus for faith groups, including recent steps like the launch of the Faith Plans initiative and the Interfaith Center for Corporate Responsibility outlining priorities for a just transition. The Catholic Church's Laudato Si' Movement has led a yearslong fossil fuel divestment campaign, and the Vatican has endorsed financial steps like divestment and reinvestment in sustainability through its Laudato Si' Action Platform. Bishops in the Philippines in January called for the local church to reject donations with ties to fossil fuels as part of a full break with the industry.

As calls for divestment have gained momentum, fossil fuel companies and other high-emissions industries have sought to assuage investors by publicly backing the Paris Agreement and putting forth net-zero emissions plans. But climate activists have accused many companies of "greenwashing," or publicly marketing sustainable practices while continuing business as usual.

Recent studies have shown the top oil companies have increased exploration while publicly touting net-zero targets and clean energy transitions, and major corporations have undercut emissions pledges by donating to political campaigns opposing climate policies. A separate Bloomberg analysis found that banks have financed roughly $4 trillion for coal, oil and gas since the 2015 adoption of the Paris climate accord. 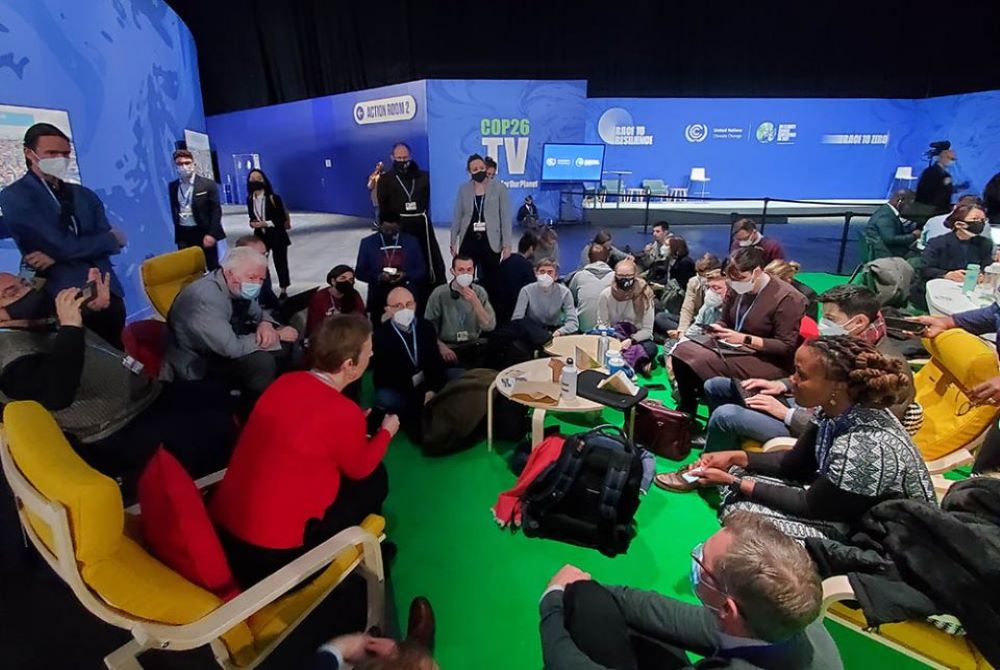 At COP26, dozens of countries and companies committed to end financing for overseas fossil fuel projects, and a coalition of 450 banks and private financial institutions said they would direct their combined $130 trillion in assets toward net-zero emissions by 2050. But many observers said those plans lacked details or urgency. And despite pledges, banks continue to invest in coal and oil prices, that after falling below zero early in the COVID-19 pandemic, have now surged toward nearly $100 a barrel.

Prove told EarthBeat that as more and more companies make public climate pledges or adopt environmental, social and governance-oriented (ESG) criteria, it's the faith-based community's role to ensure that banks and investment houses hold them, and their financers, to meeting them.

"The label is one thing and the actual reality is quite another. And there are many, many instances of greenwashing where what looks and sounds good is actually cover for something that isn't so good," he said.

In the coming months, the organizations behind the moral investment standards plan to engage large investment firms like BlackRock and Vanguard, especially around spring shareholder meetings. At the same time, they're encouraging individual churches and faith institutions to reach out to their own financial planners and urge them to adopt the standards.

Prove added that getting more asset managers to make their default investing options fossil-free and deforestation-free "would be huge."

"It would be a fundamental shift. So we hope that we can move things in that direction," he said.

The World Council of Churches, which is based in Geneva, Switzerland — one of the world's leading financial hubs — will share the standards with its member churches and partners and encourage them to begin conversations with their respective banks and financial service providers. They will also meet with their own pension fund managers to ensure that they’re following WCC's own fossil fuel divestment policy that it adopted in 2014.

Mobilizing even a small portion of the global faith community behind the moral investment standards could be a game-changer, Prove said.

"I think the real power lies in the hands of that collective global constituency of people of faith around the world to make that demand," he said. "I think [if] financial service providers see that taking hold, it will make a difference in their calculations."