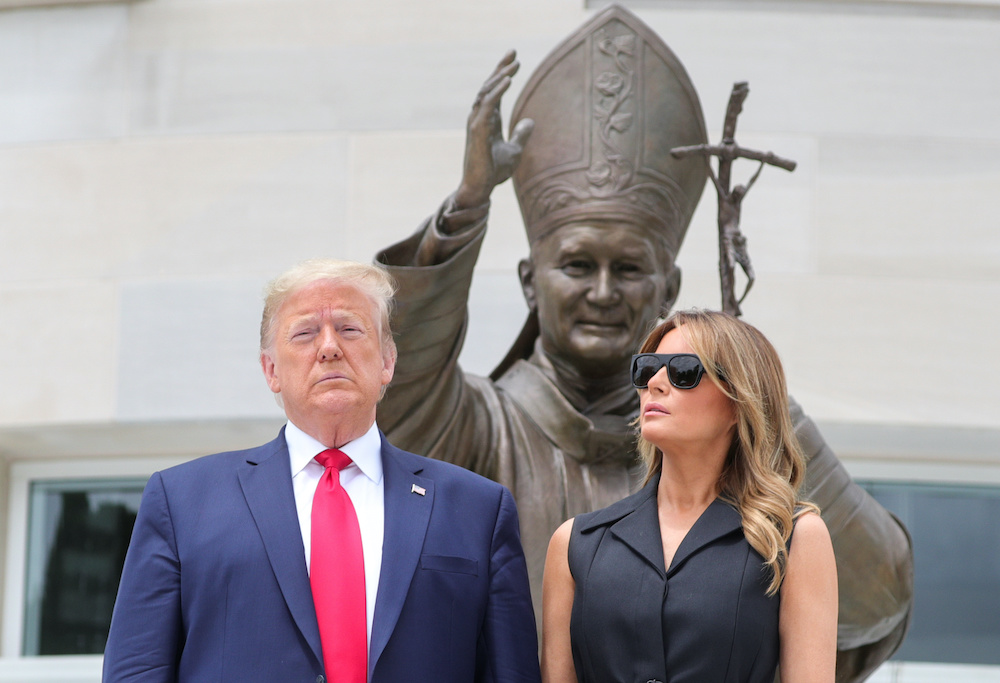 A local chapter of the Knights of Columbus in Washington, D.C., made up of black Catholics, has denounced President Donald Trump's recent visit to the St. John Paul II National Shrine. Trump's visit came against the backdrop of Black Lives Matter protests across the country.

The Knights of Columbus grand knight for St. Augustine Catholic Church said their chapter was in "full support of Archbishop Gregory" and his statement to the media.

Archbishop Wilton Gregory was appointed in 2019, after serving as archbishop of Atlanta since 2005.

"We were not notified that the President will be over at the JPII shrine. The only time I found out about it is when I saw Archbishop Gregory's statement. I'm in full support of Archbishop Gregory and our pastor, Fr. Pat," said Anthony H. Bigesby, the grand knight of St. Augustine Council #15723.

The John Paul II Shrine is owned and run by the Knights of Columbus, who later released a statement saying the trip was planned months ago and that Trump was originally scheduled to "sign an executive order on international religious freedom."

Fr. Pat Smith, pastor of St. Augustine's said that although the Knights of Columbus are an independent fraternal organization, they are "very much part of the teaching and theology" of the Catholic Church.

"The traditional definition of sacrament is an outwardly sign, instituted by Christ to give grace. Catholic institutions and groups are a visible reality of this sign. If your purpose is to see yourself as a sign instituted by Christ, then it's baffling to see the president of the United States use their institution as a political backdrop. It's reprehensible and simply inexcusable," Smith told NCR.

Trump and first lady Melania Trump visited the St. John Paul II National Shrine on June 2, a day after his controversial appearance in front of St. John's Episcopal Church, across from the White House.

Police used tear gas and rubber bullets to clear protestors from Lafayette Park on June 1, before Trump, accompanied by aides, walked to St. John's and posed for pictures, holding up a Bible. The police also forcibly removed Rev. Gini Gerbasi from the church grounds prior to Trump's visit.

The congregation at St. Augustine Catholic Church is predominantly made up of African Americans. It was founded in 1858. Its Knights council was chartered in 2014.

Leadership at the shrine said that Trump's visit "was fitting given St. John Paul II was a tireless advocate of religious liberty throughout his pontificate." They said the shrine welcomes "all people to come and pray and learn about the legacy of St. John Paul II.”

"As a black Catholic priest for almost 30 years, there is no better way to communicate to me that I don't matter — and the calls and consent of the people, in light of what's going on, don't matter," said Smith.

Dr. Edward Anthony Rankin, a St. Augustine's parishioner and member of the Knights of Columbus, said he was disappointed with the organization.

Recalling Trump's record of racism against black men, he said, "A few years ago President Trump referred to Colin Kaepernick in a derogatory term for peacefully protesting. I can't speak of what right he had to go there, but to use it [the shrine] as a backdrop is not something I condone."

Thanking Washington's archbishop for his statement, Rankin said that without him, the black Catholic community "would not have a voice."

"Thank God for Archbishop Gregory, who happens to be a minority and the first African American archbishop for the Washington, D.C., area. I suspect that had he not been here, we might not have had that voice," Rankin said.

"I pray that the protest never ends until we learn from it. We only get peace when we do justice," said Smith.

[Sarah Salvadore is a Bertelsen editorial intern. Her email is ssalvadore@ncronline.org.]

A version of this story appeared in the June 26-July 9, 2020 print issue under the headline: Local Knights council denounces Trump visit to shrine.