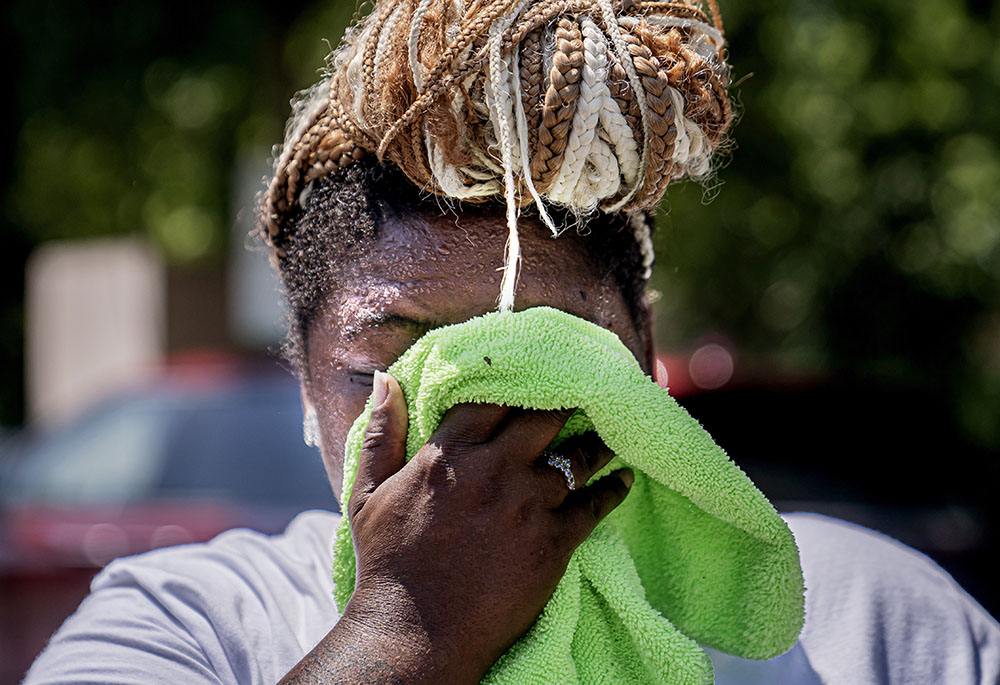 Nicole Brown wipes sweat from her face while setting up her beverage stand near the National Mall July 22, during a heat wave in Washington, D.C. (AP/Nathan Howard)

Not a week after James Webb Space Telescope photos dazzled our eyes with the sparkling, cool colors of the universe, we were then confronted with the harsh, hot reality facing us here on planet Earth — cracked brown terrain, billowing black smoke and raging red flames. Much less dazzling photos of the danger and devastation caused by extreme weather filled news pages across the globe as they reported record-breaking heat waves and wildfires.

Some places in Europe felt highs over 104 F, while areas of the United States blistered at 115 F. More than 1,000 deaths on the Iberian Peninsula were attributed to the heat and fires. Though the duration of this particular severe weather was short, the effects were nonetheless deadly.

Meanwhile, a four-seasons-long drought continues to threaten famine in areas of Africa. Decades of logging and mining in the Amazon region contribute to loss of wildlife habitats and Indigenous homelands, as well as increased violence that goes largely unchecked by authorities and adverse health effects on humans exposed to high amounts of toxins from the illegal practices. And Russia's invasion of Ukraine more than five months ago is still being financially fueled by the world's inability to commit to decreased dependence on coal, oil and gas.

Even before July's scorching heat, planet Earth was experiencing a climate emergency.

In a July 21 message from Pope Francis for the 2022 Season of Creation, he said the planet is reaching "a breaking point" and urged "all of us to act decisively."

The Vatican continues to do just that, announcing on July 8 that it is now a formal party to the United Nations Framework Convention on Climate Change and intends to formally join the 2015 Paris Agreement. On July 19, it announced a new investment policy for all Vatican offices that discouraged "speculative investments" in oil and mining industries and encouraged investment in companies working to protect the environment and promote the use of clean energy.

Francis has urged nations to collaborate on pursuing ecological justice at two upcoming U.N. conferences — COP27 on climate change and COP15 on biodiversity. And a top Vatican official has expressed support for the proposed Fossil Fuel Non-Proliferation Treaty.

It is clear through both words and actions that creation care is a priority of the Vatican and the leader of the Catholic Church. Yet, it continues to feel like the U.S. bishops have missed the memo.

East African bishops spent July 10-18 discussing the "environmental impact on integral human development" in their region and devising plans to educate and encourage people about care for the environment. Archbishop Roberto González Nieves of San Juan, Puerto Rico, issued a 56-page pastoral letter on July 15 calling for action to protect Puerto Rico's natural resources and spur transition to clean energy sources. And bishops in Brazil have supported a campaign to incentivize Catholics to vote for political candidates who are committed to environmental protection.

It is past time for the U.S. bishops to afford this level of moral, financial and political priority to an issue that the pope has repeatedly called "essential" to a Christian life of virtue. Before long, we won't even be able to hear the idiomatic crickets chirping, because excessive heat and poorly regulated pesticides are driving them to extinction.

A version of this story appeared in the Aug 5-18, 2022 print issue under the headline: US bishops miss Vatican memo on climate change.