At Benincasa community, a new model for religious life unfolds

It's not all 'nones and nuns' 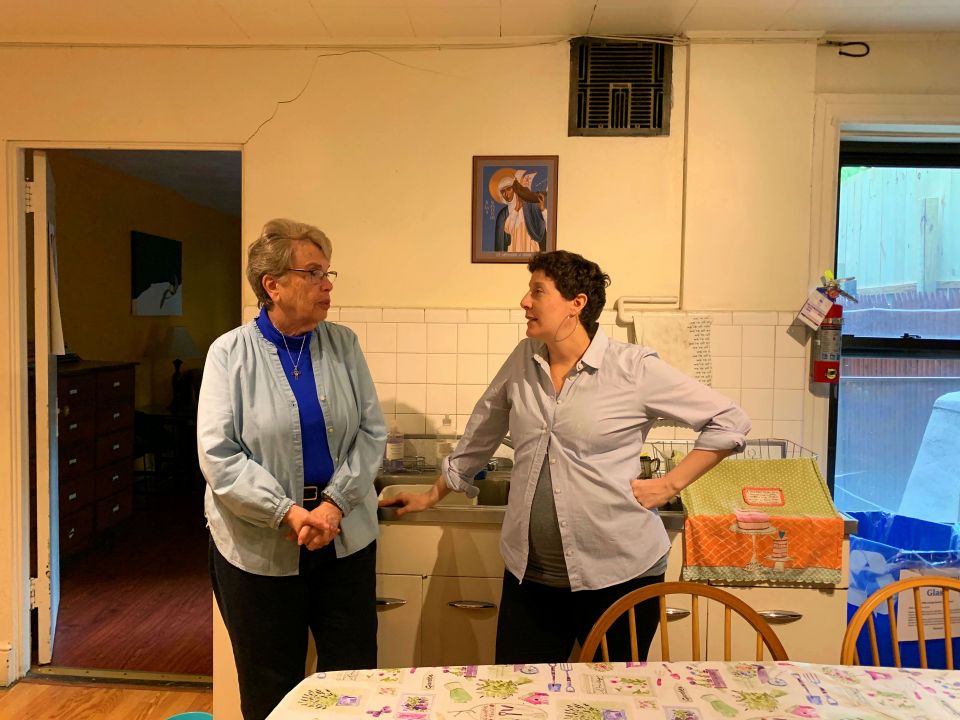 This is the first in a series that will profile young adult Catholics who are founding their own intentional Catholic communities. (An introduction to the series can be read in my recent column "Young progressive Catholics really do care about the church.") Below is a Part One of a two-part series on Benincasa Community in New York City. ​Part Two can be read here.

New York — Much has been written about the Nuns and Nones project in the past year, both in our own pages and in the national media. The movement has the very good intention of connecting millennials with limited or no ties to religion with women religious to share their mutual passions for social justice and community life.

In all of the conversations about the future of the Catholic Church and the fate of religious life in the U.S., this population of millennial Catholics is often neglected.

They are progressive young adults who feel deeply connected to what they understand is best about their Catholic faith: meaningful rituals, symbols and feasts; radical social justice teachings; a relationship to God that is co-creative and enriched in and through community.

They are Catholics who, two generations ago, likely would have joined religious life, but who grew up in an era in which there were more options for women, where the understanding of marriage had developed into more of a partnership than a hierarchical relationship based on rigid gender roles, and where the church's pervasive power had waned significantly.

It was those kinds of Catholics that Karen Gargamelli had in mind when, in 2013, she wrote an essay in America magazine called "Open the Doors: Vacant convents offer a new opportunity for service." The piece was short, but bold and visionary right from its opening paragraph:

We live in a unique time of possibility and hope. Although the number of women religious is dwindling, they remain the lifeblood of our church, and their convents are holy and fertile ground for new communities of faith. My suggestion: Keep the convents. Open the doors to lay people. Welcome migrants and the homeless. It is a simple plan with a simple mission as old as the church itself: Form local communities of faith where people can practice the works of mercy and grow intellectually and spiritually.

Gargamelli had met hundreds of lay Catholics who were as undervalued and underappreciated as those empty convents.

"God planted on my heart a project that would unite laypeople, members of religious communities and individuals in need of homes," she says.

When she penned the essay, Gargamelli was a foreclosure prevention attorney at Common Law, a non-profit she co-founded that offered free legal education and assistance to low-income New Yorkers facing eviction. NCR interviewed her back in 2012, and, earlier that same year, named her one of "12 Catholic women under 40 making a difference."

Before Gargamelli decided to sign up for law school, she had discerned religious life. She joined Dominican Volunteers USA just after graduating from Loyola Chicago in 2003. She was placed in New York City, and lived with three Dominican Sisters of Amityville.

Not quite finding her place among women religious, Gargamelli began volunteering in 2005 at the Catholic Worker's Maryhouse, where Dorothy Day had lived until her death in 1980. To this day, she still works the Monday evening dinner shift in the legendary Catholic space. 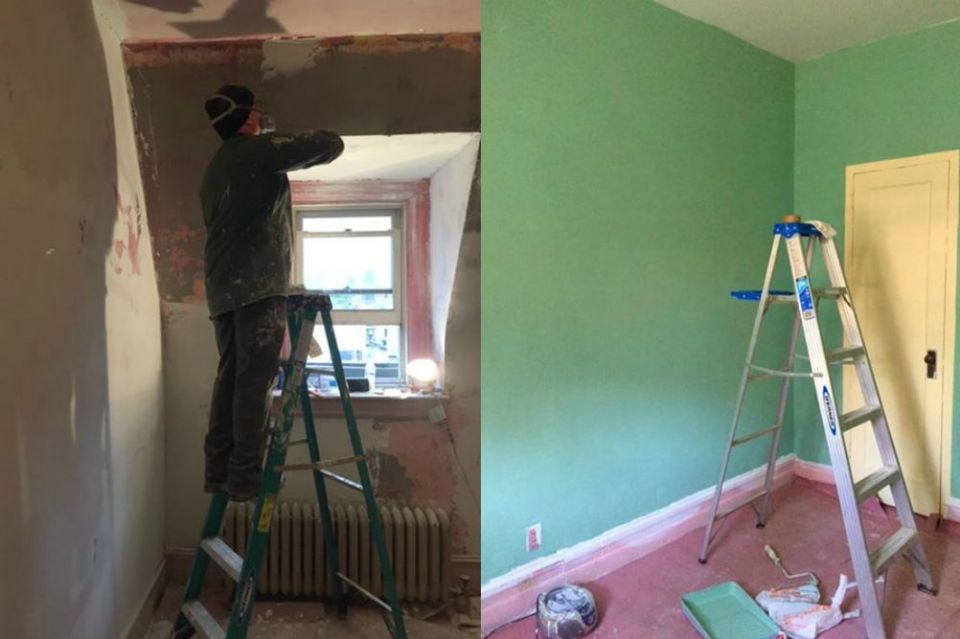 Left: Many of the small bedrooms at the former convent were in significant disrepair; right: A bedroom pictured after restoration (Courtesy of Benincasa Community)

Gargamelli received such a powerful response her essay in America that she embarked on "a search for a home," looking for a space somewhere, anywhere, in the five boroughs of New York City. There were a couple of bites from priests in parishes and from sisters working in universities and non-profits, but each possibility fell through.

"It was years of looking and door-knocking and promises that didn't come to fruition. It's hard to not be resentful of those years," she admits.

Gargamelli visited representatives from every major community of women religious in New York City to tell them about this new vision for religious life. "We went to see the Sisters of Charity in the Bronx, the Sisters of St. Joseph in Brooklyn, the Good Shepherd Sisters, the Mercies," Gargamelli recalls.

"They all loved the idea, but no one had any property to offer since most of it was owned by the Archdiocese of New York," and Cardinal Timothy Dolan had just announced that a significant number of parishes would either be merged or closed.

Gargamelli had nearly reached the point of giving up hope when a friend unexpectedly landed on a strong lead. The newly appointed pastor of Blessed Sacrament parish on the Upper West Side of Manhattan had a largely unused former convent and, contrary to the instincts of archdiocesan officials, he didn't want to sell it.

Much of the five-story brownstone was in disrepair. Though the first two levels were in decent shape, in the upper three floors the paint was peeling, walls were crumbling, the floors were cracked. The condition of some of the rooms suggested an earlier presence of squatters.

But Gargamelli could see her dream coming to life, even in such rough circumstances. And she believed that the skills and generosity of her friends could transform this long neglected space into a center for community.

"I finally found an amenable partner," Gargamelli says. But it would come at a cost.

She negotiated a five-year lease with the parish finance committee. The lease was designed to increase the rent annually to ensure it was financially beneficial to the church.

"The rent would start at $3,000 a month and go up to $7,000 over the course of five years, including all utilities and structural maintenance," Gargamelli says.

Once she got access to the convent, Gargamelli set up workdays every weekend, inviting friends, family and members of the Catholic Worker to clean, scrape, spackle and paint. All of the renovation and supply costs came out of her pocket or were donated by supporters.

She would eventually marry one of the hardest working volunteers, Sean McCreight, who was also one of the first to sign up as a member of the intentional community. 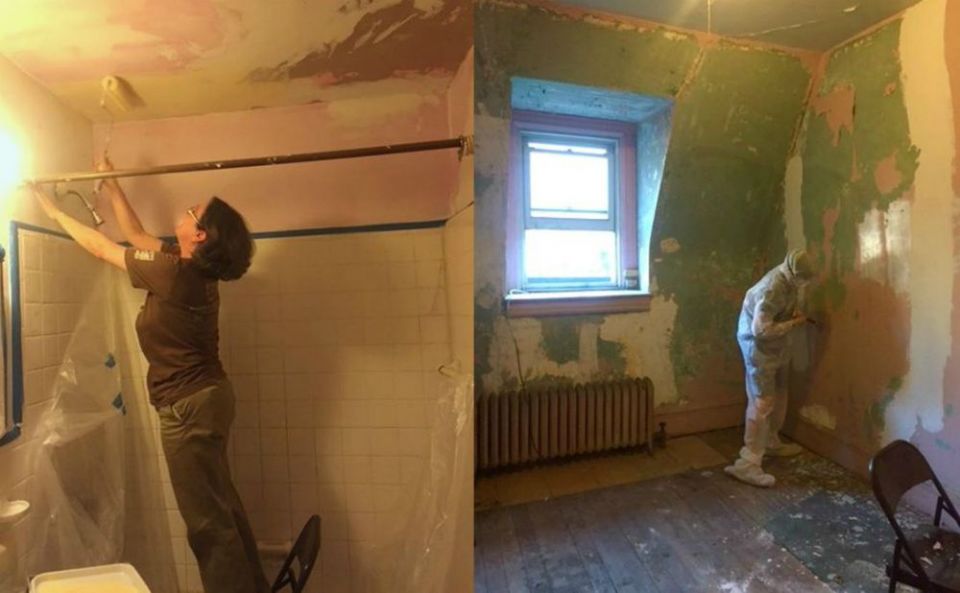 An English teacher at a public school in the Bronx, McCreight, 31, had been discerning with the Jesuits for some time, but didn't quite fit the Society's mold.

Karen and I both felt a deep calling to religious life, to a life outside the norm that was deeply rooted in our faith and spirituality," says McCreight, 31. "But we couldn't find our place in religious life in its current form."

McCreight first met Gargamelli at the "Thompson Street Feast," a monthly gathering of Jesuits and lay people to celebrate Mass and enjoy dinner together.

One of Gargamelli and McCreight's shared hopes was to use the Blessed Sacrament convent to continue those monthly feasts.

Another volunteer, Jimmy Hannigan, first met Gargamelli during his year of service as a Dominican Volunteer. Raised in a Connecticut suburb, his privileged worldview was broken open during his placement as a caseworker at St. Dominic's Home, a foster care agency in the Bronx.

"That year left me with a deep desire to live in community and experience religious life," Hannigan recalls.

"I felt a call to live 'differently,' and Dominican Volunteers gave me a sense of that for a year, but I really didn't know what that looked like longer-term until I heard Karen's vision for Benincasa," recalls Hannigan, who is now 27.

"It felt like a place that wouldn't compromise," he says, "that said, 'Yes, we can create and live in a space where we resist capitalism, have women's leadership and LGBTQ rights fully reflected in a Catholic space, where we can serve our neighbor, and have a lot of fun at the same time.' "

In Part II, which will post tomorrow, the Benincasa Community discusses how they got their name, the ways the Dominican Sisters, Daniel Berrigan's Jesuit Community and Catholic Worker guide them, and what's next as they near the end of their lease at the convent.