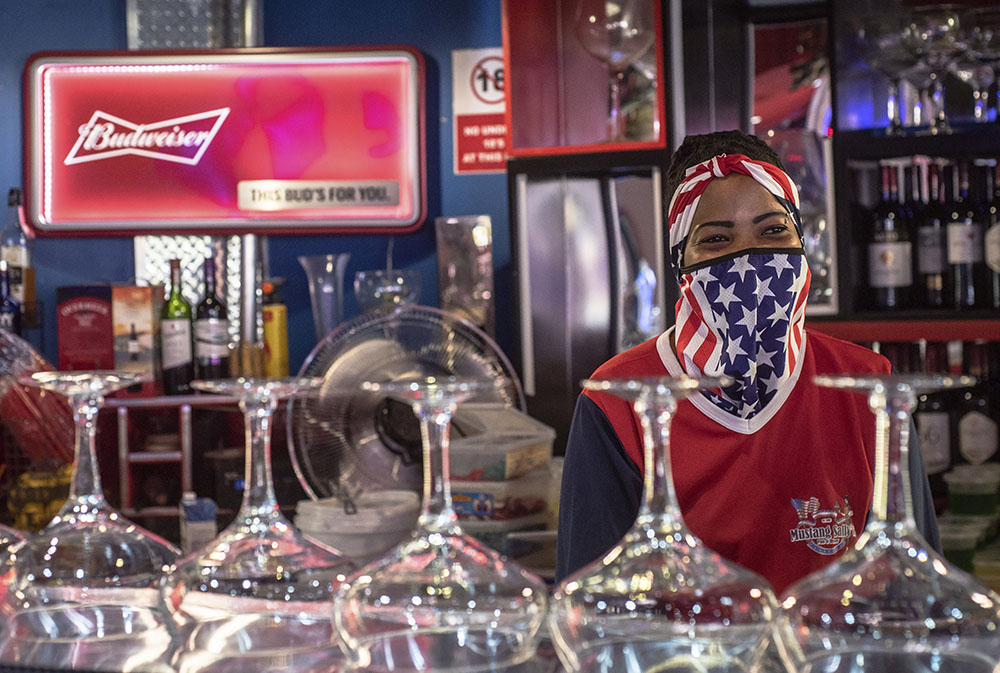 A bartender wears a face mask to protect against COVID-19 at the Mustang Sally Restaurant in Pretoria, South Africa, on Nov. 4, 2020, the day of the U.S. presidential election. (AP)

As the House Select Committee on the attack on the Capitol wraps up its public hearings and we continue processing the startling new details of the insurrection on Jan. 6, 2021, I have been thinking about the various ways we see ourselves as a country, especially as I am currently outside of it.

Earlier this month, New York Times opinion columnist Ross Douthat wrote a piece titled "What It Means to See America in Person," about the impact his family's summer vacation driving across the United States has had on him. Writing late at night from a hotel room in Montana, he remarks that the journey across so many states has inspired in him a sense of wonder at the vastness and contents of the country. Additionally, he noted his increased appreciation for "the intense difference between America experienced as a geographic entity, a continental empire, and America experienced as a virtual landscape, via the screens and apps through which we increasingly encounter one another."

Although I often find myself disagreeing with some of Douthat's views, especially when they veer into lane of Catholic ecclesial politics, I really appreciated this and his following column, also written from and about his road trip.

I grew up in a family of six without extraordinary financial resources, which meant that the destinations of my family vacations were determined in part by where the minivan could take us. While we never traveled cross-country in the westerly fashion of the Douthat family, we did spend a lot of time driving to visit family, cities and historical sites on the East Coast. When I was a kid, visiting places like the Gettysburg battlefields or Independence Hall in Philadelphia or the Capitol in Washington helped make American history class in school come alive in a way that was merely abstract for other classmates.

And as Douthat experienced, such road trips helped me have a more capacious perspective when thinking about what it means to talk about this country.

This has only grown exponentially for me as I have been so fortunate to see so much more of the United States as an adult. I have met, spoken with and gotten to know so many people from so many parts of this beautiful and vast country. I have seen the immense diversity of landscape and environment, living conditions and contexts, cultures and traditions, and this has indelibly shaped and informed how I think about many things about the United States.

Douthat's columns also got me thinking about another series of experiences I have been privileged to have over the years that have helped inform my thinking about the United States, its government and its people.

I read these columns while in South Africa and I am writing these words now in Cape Town, the first stop of an annual multiweek lecture tour sponsored by Jesuit Institute South Africa that will take me to multiple cities around this country as well as to Botswana and Eswatini.

Over the years, I have found that my perspective on the United States has shifted in important ways when I'm abroad and able to look back at America from afar. I learn from the questions and views of others around the world. Such experiences invite deeper reflection about cultural, social, political and ecclesial contexts that are easy to be absorbed by while back in America.

The first time I recall having a sustained and transformative experience abroad that affected my view of the United States was in the summer of 2008 when my Franciscan classmate and I lived in Bolivia while studying Spanish. We lived with the local Franciscan friars for several months and were regularly asked about American politics, especially since it was a presidential election year and they were fascinated with the race between Barack Obama and John McCain.

Some people might see that influence as a point of pride, and sometimes it is, but oftentimes it is not. In addition to being asked daily about the presidential race, that summer was also filled with painful conversations about the outgoing presidential administration of George W. Bush, the war in Afghanistan and the invasion of Iraq.

As I would experience again and again in many other countries around the world in subsequent years, people often talked about the sympathy and solidarity they intuitively felt when the United States was attacked on Sept. 11, 2001, and the months thereafter. But that this goodwill was understandably depleted years later after the United States wreaked global havoc, first with its disastrous "war on terror" and then the economic collapse of the housing market.

In 2016, while in England, I found myself fielding dozens of questions from British colleagues about what was happening back home with the rise of the Republican front-runner Donald Trump. While many political commentators and ordinary Americans alike viewed Trump as an entertaining character and a clown, our friends abroad took his candidacy very seriously. They understood what was at stake, not just for internal American politics but also for the world. 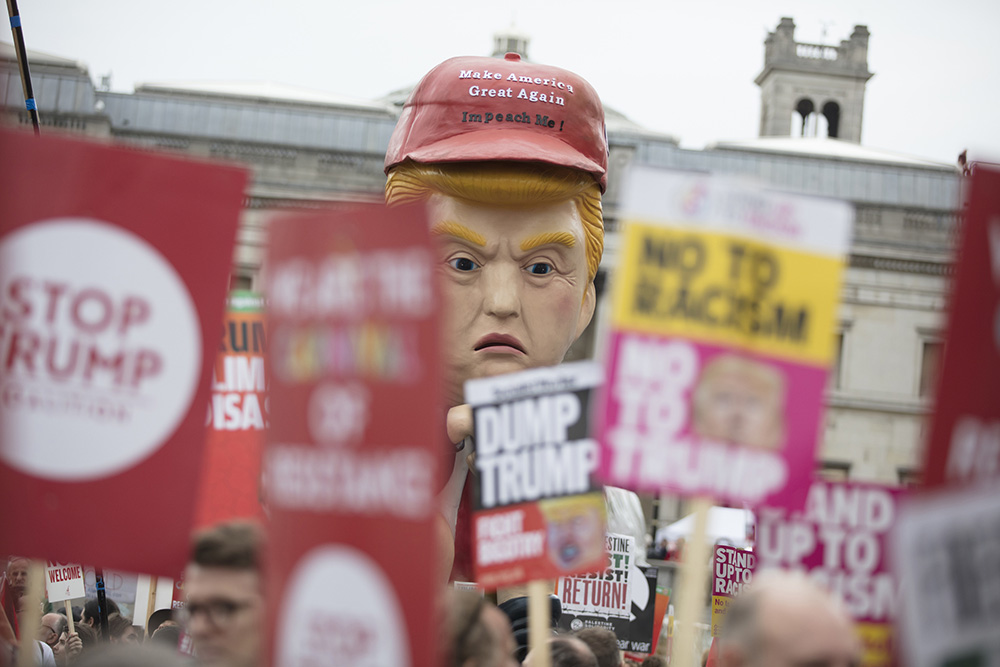 A march against Donald Trump, then president of the United States, is held in London on June 4, 2019. (Dreamstime/Inkdropcreative1)

Such consequences were evident to me in August 2017 as I watched from Ireland as the horrific events surrounding the racist "Unite the Right" rally in Charlottesville, Virginia, unfolded. I witnessed Europe's reaction to the American president's inexplicable failure to condemn the overtly racist violence, inexcusably claiming violence on "many sides" and saying about white supremacist protesters that there "were very fine people on both sides."

In 2019, I was in Australia when the mass shootings in El Paso, Texas, and then Dayton, Ohio, took place. I wrote about that experience in a column, noting the stark contrast between American and Australia, the latter of which enacted very strict gun laws in response to just one mass shooting in the 1990s. From the other side of the world, it was clear that another way was indeed possible.

And now I find myself again as an American abroad, this time watching the closing congressional hearing on the Jan. 6 insurrection investigation from the African continent. It is again clear that the whole world is also watching, and trying to make sense of what has happened and what will happen in the United States moving forward.

One of the key takeaways I see right now is a simple reminder that America is not as exceptional or special as Americans so often believe. We are as vulnerable to political violence and corruption as any other nation. The question now is what do we want to do and what are we willing to do in light of this fact?

Traveling abroad — like a road trip across America — is a privilege and an opportunity that not everyone has available to them. When I was a boy traveling in the family car on vacation, I could never have imagined that I would have the opportunity to someday visit such amazing places and people around the globe. And so I never take it for granted when invitations to lecture, lead retreats or participate in conferences make such travel possible.

Therefore, I try to make the most of it, which includes not only earnestly striving to learn and experience as much as possible about the place I'm visiting, but also look back and see more clearly the complex reality that is my own country, having been aided by the perspectives of other peoples.

Even if I never have the opportunity again to travel outside the country, I realize that it is important to consider the perspective of what America means to other people around the globe in reflecting on what it means to me. That path requires committing to an intellectual journey of humility and self-reflection as much, or even more so, than a physical journey abroad.