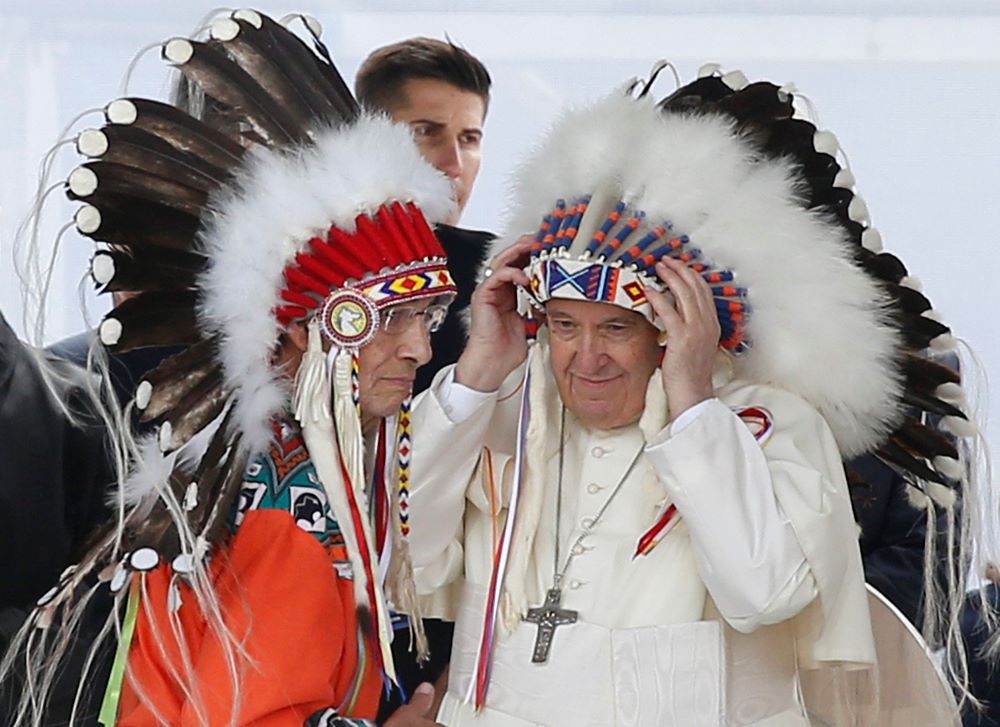 Pope Francis adjusts a traditional Indigenous headdress during a meeting with First Nations, Métis and Inuit communities at Maskwacis, Alberta, July 25. During a weeklong visit to Canada, the pope met with Indigenous groups and apologized for the church's role in "evil" residential schools. (CNS photo/Paul Haring)

At the Go, Rebuild My House blog sponsored by Sacred Heart University, The Tablet's Christopher Lamb writes about the powerful symbolism of Pope Francis' trip to Canada. Profound though those images were for Canadians, they have a universal relevance as well, especially as we all pursue a more synodal church. "The Pope’s focus on the Indigenous in Canada was not about what he told them but learning the wisdom they have to offer," Lamb writes. "This was symbolized in Francis wearing the headdress of an indigenous chief and being given an indigenous name."

At Religion News Service, columnist Mark Silk looks at Greek Orthodox Archbishop Elpidophoros, who recently caused a stir when he presided at the baptism of a prominent gay couple. It is not the first time this engaging, pastorally-minded archbishop has ruffled some conservative feathers.

One of the most important elections in America is happening today in Arizona, where state Rep. Mark Finchem is seeking the Republican nomination to be secretary of state. In years past, contests for that office have been snoozers. But Finchem is a Trump-endorsed election denier and Arizona is likely to remain a swing state for many years, so selecting who is going to be tasked with administering elections is a big, big deal. Politico has the story.

The Guardian reports on public attitudes in the United Kingdom to news that two of that country’s largest gas and oil companies, Shell and Centrica, posted record profits and are giving large dividends to shareholders. Meanwhile the two companies' stakeholders — the average Briton — face only rising costs. And The New York Times reports that in this country, record profits for oil and gas companies are resulting in large stock buybacks, which also reward shareholders not stakeholders. This is not the economy of Francesco!

Sometimes, I think our culture seems to be drowning in irony, and it is deeply worrisome. Other times, it is so rich you have to sit back and enjoy the moment. Fox News obtained exclusive video of migrants being taken into a church. Their intrepid reporters noted that the church bulletin was asking for sturdy shoes and sneakers for them. Imagine that: a church that abides by the biblical call to welcome the foreigner.

Also nominated for an Oscar in the category "Unintentional Irony," David Jolly, Christine Todd Whitman and Andrew Yang write in the The Washington Post about their decision to start a new third party and why their effort will succeed where others have failed. It is true that the two parties are, at the moment, being pulled to their ideological extremes, but they are wrong when they write, "In a system torn apart by two increasingly divided extremes, you must reintroduce choice and competition." The underlying American problem is that the overreliance on "choice and competition" as the means of resolving political, social and cultural conflicts has got us to where we are. Pope Francis sees the need for a paradigm shift. Why can't these three?

Also in The Washington Post, Christine Emba has a superb column about a Yale professor who tweeted that President Joe Biden's decision to keep working while he had COVID was an instance of "white supremacy." Emba worries about "the increasingly indiscriminate deployment of the term 'white supremacy' as a criticism of various — often nonracial, even inoffensive — traits and actions." She rightly notes that there is something well-meaning at work here, but also that it has the opposite effect of what it intends, and looks at the ways right-wing media use these examples of overreach to convince people that nothing can or should be done about the very real threat of actual white supremacists.

Last week, I linked to a Bach chorale prelude for the organ, "Erbarm dich mein," BWV 721. An attentive reader reminded me that Bach also composed an aria on the same text, part of his monumental St. Matthew's Passion. Best of all, he sent me a link to that work sung by the great Marian Anderson. It is splendid.