Join us for a virtual Triduum observance 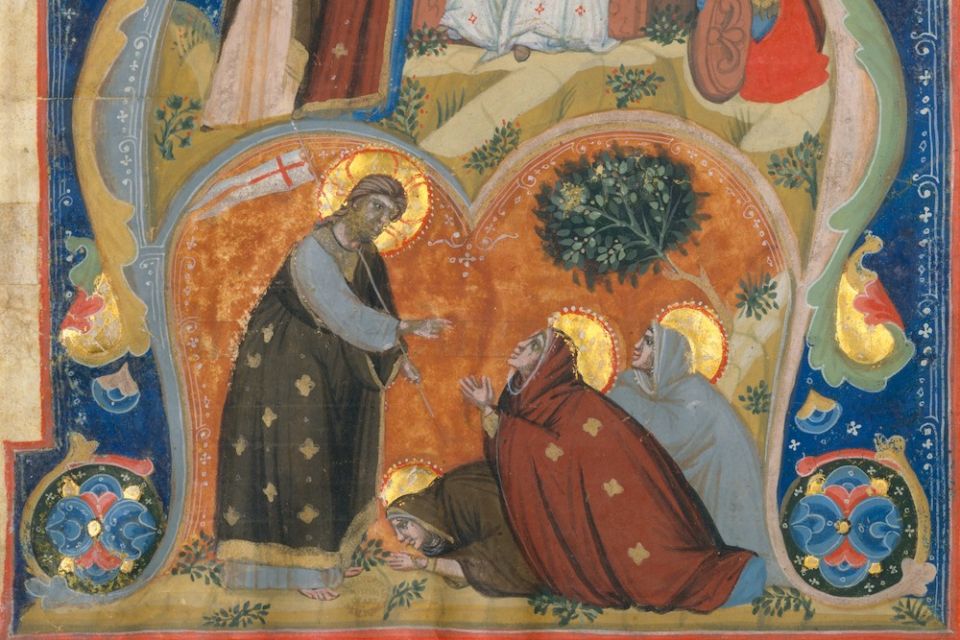 Detail of manuscript illumination with scenes of Easter by Nerius, circa 1320 (Metropolitan Museum of Art)

Once again we've arrived at the nub of our story, that point in the year where we recount the cold-sweat reality of God incarnate left to the vengeance of threatened religious and civil rulers who would stop at nothing short of death.

We don't, in the lingo of the day, look to move beyond it or put it behind us, but Catholics the world over annually move into it and through it, through the inexplicable horror, to the empty tomb, the heart of the community's reason for existence.

In the absence of public gatherings this year, we offer you a virtual presentation of Triduum observations, the recollection of the three-day passage of Jesus through betrayal, public shaming and torture, death on a cross, culminating in resurrection.

The compilation of music, spoken word and video is the creation of Dan Schutte, a member of the NCR board of directors, a former member of the Jesuit order and a founding member of the St. Louis Jesuits, who reunited for a final concert last year.  Schutte now lives in San Francisco and is composer-in-residence at the University of San Francisco.

As someone once put it, the St. Louis Jesuits have written the soundtrack for our spiritual lives. I can't think of a time when that soundtrack is more needed and valued than this year.

The offering you'll find on this page is a recent inspiration that builds on existing Schutte compositions. He explained in a recent email exchange that the idea came to him "just over a week ago" when he realized he wouldn't be traveling to his home parish in Fairfield, Connecticut, where he's celebrated the Triduum the past eight years. "As I embraced my sadness, I began imagining a way for myself and my friends in Fairfield to be together virtually during these days of physical separation through music and images. And so I went to work." Much of the music is from a 2000 collection called "Glory in the Cross" that he wrote "to support parishes with music as they prepare for the Triduum liturgies." With the most significant portion of musical content in hand, he said, "the primary work for me has been creating the visual element to accompany the music."

He speaks of the visuals as having "a power to capture people's minds and hearts" as they "help open up the soul of the song."

The result is a remarkably beautiful and moving reflection on the Triduum and one that grows out of a lifetime of his reflection on these sacred moments. "As a young Jesuit in formation, the communities I lived in, beginning way back in St. Louis, celebrated the Triduum liturgies with great care, imagination and enthusiasm," he wrote. "So very early on in life, I came to love and treasure these high holy days."

The entire selection is available here, so you can review the settings ahead of time. Beginning Thursday, individual segments will be highlighted on the website each of the three days. Our hope is that you might share them with friends and fellow parishioners, perhaps use them as a family to join in and meditate on elements of the Triduum. Consider sharing them with your pastor. The presentations might prove helpful in virtual liturgies, especially since much of the music may be familiar to congregations. The pieces might also prove a consolation beyond the formal Holy Week observances, a way of understanding and moving through our own bitter time, a kind of extended Triduum now being experienced globally — until resurrection unfolds in endlessly new ways and with new meaning in the months ahead.

Perhaps it is something about being sequestered that makes wildly imprudent and potentially destructive ideas take hold, like a parallel plague, among some on the religious right, a batch of Catholics included. If you should be wondering how to respond to the unctuous pronouncements demanding that churches remain open and people gather for religious services (religious freedom and anti-secularism are often the tropes invoked), I can recommend nothing better than the column we posted earlier by Franciscan Fr. Daniel Horan, headlined, "For the love of God (literally) stay home, be safe, and pray."

In the rather extensive treatment, amply supported biblically and theologically, he writes:

These sorts of contrarian arguments are emblematic of a small but vocal crowd of pandemic naysayers in the church that, wittingly or otherwise, reduce everything from church buildings to even the Eucharist itself into symbols of a growing idolatry that minimizes God and restricts God's presence to a limited number of discrete locations. It's true that Christ is uniquely present in the Blessed Sacrament, but it's not true that this is the only way God draws near to humanity and the rest of creation. God's grace is not scarce nor is God distant from us!

Horan is but one of a broad spectrum of voices that are represented here in the arc of this pandemic to provide guidance and solace from the depths of our tradition.

With our Coronavirus Tracker, we're actually tracking not the virus but its effect especially on the Catholic community. It includes not only extensive NCR reporting and commentary but pulls in information and analysis on the global church from other sources and also hosts your thoughts and insights offered in response to questions we're posing.

The church after coronavirus

Part 1 - How our communities are changing

One of the most distinctive elements on the tracker began as an idea of Josh McElwee, NCR Vatican correspondent, who suggested asking some of the best-known thinkers and leaders in the Catholic community to write briefly about what they think a post-pandemic church will look like. The project was assembled by McElwee, NCR national correspondent (and soon-to-be executive editor) Heidi Schlumpf and columnist Michael Sean Winters. The pandemic is forcing us to think differently and to reconsider a lot of our presumptions and this is some of the most interesting thinking out there. The three parts are interlinked. In the gray box nearby, you will find links to each "The church after coronavirus" piece.

I would also call your attention to two items that posted today. I am very pleased to note the essay by Cathleen Kaveny of Boston College Law School, who has an intriguing take on (and concerns about) the effects of social distancing, aided by technology, on an already divided church and culture.

A richly reported piece by Schlumpf, who interviews bioethicists on the range of issues, medical and otherwise, goes beyond the usual concerns raised by the coronavirus. Meanwhile, the Global Sisters Report contains a rundown of how communities of women religious around the world are dealing with the pandemic.

And on Wednesday, we'll be posting a column by our long-time contributor Sr. Joan Chittister, who will be weighing with analysis drawn from the very deep waters of the Benedictine tradition.

Keep checking in because we'll continue to report on all aspects of this moment in the life of the Catholic community.

Before the anniversary of the death of St. Óscar Romero recedes too far into the past, I would like to share with you a bit about Thomas Quigley, formerly Policy Advisor on Latin American and Caribbean Affairs for the U.S. bishops. He and mutual friend and colleague Gene Palumbo, who recently wrote a telling piece on Romero, told me about an account Quigley had written in 1980 for The Witness, a magazine of the Episcopal Church that ceased publication in 2003.

First, briefly about Quigley. It can without much fear of challenge be said that he was singularly most responsible for connecting the U.S. church and its leaders with the realities of Central America (which differed quite a bit from the State Department's narrative) during the tumultuous 1970s. Reflecting on Quigley's role, John Carr, director of the Initiative on Catholic Social Thought and Public Life at Georgetown University who previously served as director of the Department of Justice, Peace and Human Development at the United States Conference of Catholic Bishops, said in an email exchange: "He helped bishops, policymakers and the rest of us to listen and learn the lessons from a church in Latin America struggling to hear and stand with the poor and oppressed."

The piece is stirring in its own right and certainly given what has transpired since. Quigley attended the service in which Romero, who received thunderous applause from the congregation, delivered the challenge to the government to "stop the repression." It was the day before he was assassinated.

Wrote Quigley in the aftermath, "It didn't occur to me then but it has often since, that that day, the eve of his martyrdom, was as vivid a re-creation as I could imagine of the palm-strewn path into Jerusalem."

A version of this story appeared in the April 17-30, 2020 print issue under the headline: Solace from the depths of our tradition .

Column | Join us for a virtual Triduum observance

Your thoughts on Cordileone barring Pelosi from Communion, part two

The Francis Effect podcast: War in Ukraine, the pope's student dialogue, and Lent