Look for lay involvement that transcends the ideological divide 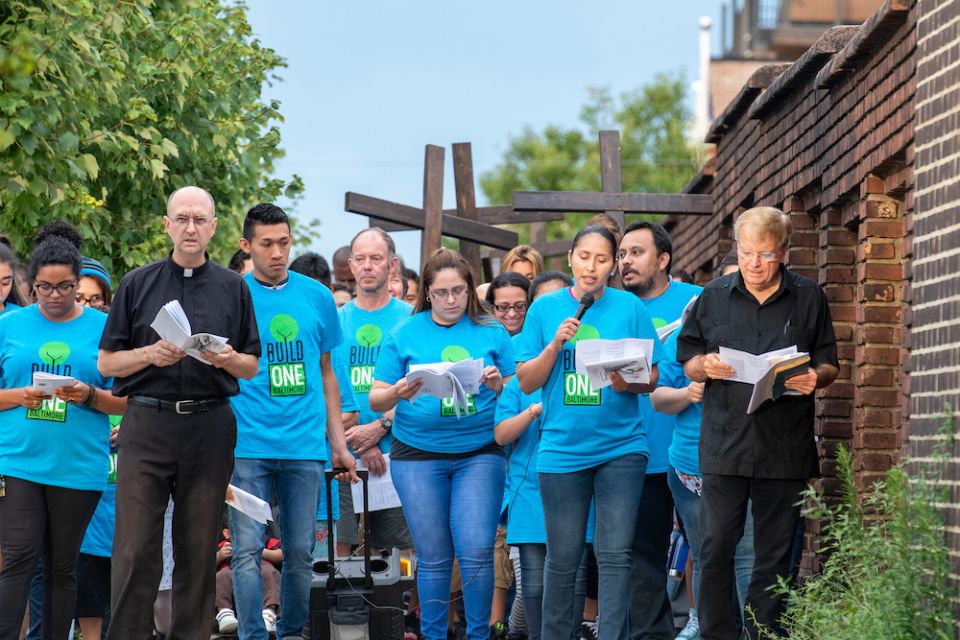 Redemptorist Frs. Bruce Lewandowski and Mark Owen flank parishioners and others participating in the refugee-themed Stations of the Cross in Baltimore July 23, with over 200 in attendance. (CNS/Catholic Review/Kevin J. Parks)

Are you a lay Catholic? It's time we talked.

Good news. There's agreement now conceded across the church: We have a right and an obligation to be involved in matters of church governance.

No one, at least publicly, relegates us to pay, pray and obey. We are supposed to step up.

But what should that lay involvement be?

Bill Droel of the Chicago-based National Center for the Laity has argued for decades that the role of lay involvement often is based on the wrong questions. Droel promotes the concept that the Second Vatican Council calls us to a lay vocation that exists not so much in the church, but in the world. What we do on the job, as parents, in our communities, in politics and business is as holy and to be honored as ordained ministry.

The Jesuits say God is in all things. As the National Center for the Laity notes, an important part of the Mass is the conclusion: "Go in Peace." (I have been receiving their helpful newsletters for decades — sorry, Bill, I haven't always been paying for it.)

It is an important distinction. Our work is in the world. The going forth from Mass is the beginning of our work, not the end. In Droel's view, that says much about the temptation of pastors and bishops to assume the ultimate authority on all things moral and holy. Laypeople have a particular expertise about our daily lives. A Catholic politician, for example, knows more about the process of lawmaking than any clerical adviser. A holy lay witness includes those who protested at the U.S. Senate office building on July 18 for immigrant rights.

Lay involvement in the nitty-gritty details of church life creates its own issues. First, there is the temptation to place the work of the laity around the altar as the paradigm of what is holy, often at the expense of the value of our secular work.

Our parishes and dioceses need us in this moment of crisis. Yet a wise priest once noted that lay involvement has its limits. For one thing, there are too many meetings. There's a reason why most parish leadership involves the gray-haired. It's difficult to get younger parishioners, immersed in job and family responsibilities, to take the needed time. There's a good argument it's more important for parents to attend their child's soccer game than a parish budget meeting.

Now, church leadership, battered by scandals, actively seeks lay input. No rational bishop would make a decision on a church accountability issue without it.

But what kind of input? And who should give it?

John Carr, who now teaches at Georgetown University in Washington, D.C., and once worked for the U.S. Conference of Catholic Bishops, emphasizes the importance of seeking lay input from knowledgeable people of modest means, such as the director of religious education who knows how parishes operate or the immigrant laborer who knows firsthand about the struggles of many parishioners.

Our correspondent Dan Morris-Young reports this week on the Napa Institute, a confab of wealthy lay Catholics with invited bishops, scholars and politicians. The agenda is wide, but the implication is clear. Organizers promote the group as one with special expertise to solve the church's issues.

There is reason to doubt. Nothing is more problematic in the wider society than the sense that because people have money, there is a certain value attached to their opinions. Not to get all Bernie Sanders-ish about this, but wealthy people have their own prejudices, weaknesses and biases. They are not necessarily wiser than the rest of us. They just have more money, not necessarily more wisdom or holiness.

How many bishops have been pulled aside by a wealthy benefactor complaining about the Latin American pope's socialist impulses? Or asked to be less critical of immigration policies that torture children because it might upset the political impulses of supporters of a peculiarly corrupt president? The Napa Institute reinforces that wealthy Catholics have the bishops' ear simply because they can afford to run conferences in lavish settings in California wine country. Just because a participant can afford a $1,500 conference meal plan doesn't necessarily make them more wise, holy or knowledgeable than those whose budgets run more to Applebee's or Ruby Tuesday.

Another recent story about lay involvement offers a better model. A group of West Virginia lay Catholics organized a don't-contribute-to-the-diocese campaign until the Diocese of Wheeling-Charleston appointed an independent auditor to look at the church's finances. This was a response to the staggering excesses and outright financial crimes alleged against former Bishop Michael Bransfield.

The good news is that the group was listened to. The diocese promised to implement an independent financial audit. More of the truth of Bransfield's activities will see the light of day.

The West Virginia group takes no position on who the church should ordain, what the stance of the church should be on divorced or remarried Catholics, or the other contentious issues that earn much notice at gatherings like Napa's. As lay Catholics, they argued, they should simply know how their money is spent. That kind of lay involvement transcends the church's ideological divides and is a start on how laypeople can play a role in church governance.

A version of this story appeared in the Aug 9-22, 2019 print issue under the headline: Lay involvement that transcends divides .

Opinion | Look for lay involvement that transcends the ideological divide

Why are we silencing women (and lay) preachers?

Synodality isn't just an option, it's the only way to be church