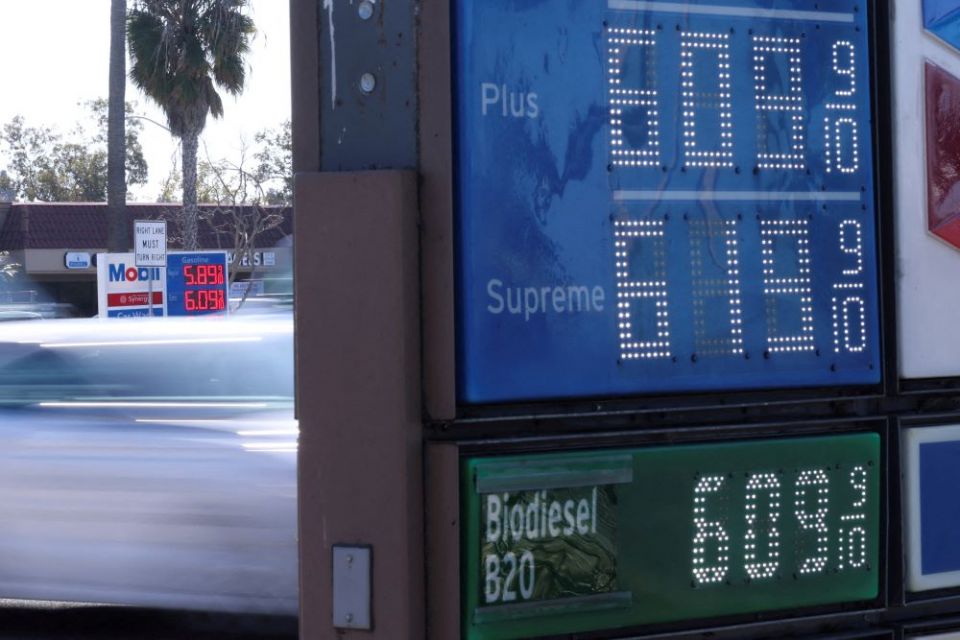 Gas prices are on the rise across the U.S. Here prices are seen in Carlsbad, California March 7. The U.S. House voted with a wide bipartisan majority March 8 to pass a ban on importing Russian oil, natural gas and coal into the United States. (CNS/Reuters/Mike Blake)

That didn't last long. The horror at Vladimir Putin's unprovoked and vicious attack on Ukraine united the people of Ukraine as never before, and united the nations of Europe as never before. But, the politicians in the U.S.? Not so much.

Last week, I called attention to the fact that both Democrats and Republicans were calling on President Joe Biden to suspend imports of Russian oil and added what now appears to be a foolish comment: "It will be interesting to see if the conservative members of Congress who have been calling for a ban on Russian oil will back Biden when such a ban results in gas prices rising even higher."

The ban was announced March 8, and by the next day the Republicans were attacking Biden. "Democrats want to blame surging prices on Russia," Republican House Leader Kevin McCarthy said. “But the truth is, their out of touch policies are why we are here in the first place. On Day 1, the president canceled the Keystone XL Pipeline and stopped new oil and gas leases on federal lands and waters. Then, he gave the green light to Putin's pipeline.”

Kansas GOP Rep. Jake LaTurner ran an ad that claimed the Keystone XL Pipeline "would have produced 830,000 barrels of oil per day, more than enough to offset what we import from Russia." The Poynter Institute's "Politifact" pointed out that the Keystone Pipeline would have taken years to complete; that it was slated to carry Canadian oil to ports in the Gulf of Mexico, where producers could sell it to anyone they wanted, not necessarily keep it in the U.S.; and that Canadian oil production has not stopped. The oil is entering the world market via other means.

The New York Times pointed out that the primary reason gas prices have been going up was the aftereffects of the pandemic, when oil production plummeted, followed by supply chain disruptions since then. "Covid changed the game, not President Biden," said Patrick De Haan, the head of petroleum analysis for GasBuddy, which tracks gasoline prices. "U.S. oil production fell in the last eight months of President Trump's tenure. Is that his fault? No."

Fox News repeated Republican claims on all three of its prime time shows throughout the rest of the week. No surprise there.

It has never made sense to me that we credit our politicians one way or the other for the state of the economy.

I despise lies. There are some less-than-pleasant personal qualities that we journalists have to cop to we are easily suspicious, we have large egos, we prefer a good argument to a good beer – but one of our saving graces, an occupational surety you might say, is that we abhor lies.

That said, I am not automatically rushing to come to President Biden's defense: The week before, he took credit for the admittedly wonderful February jobs report from the U.S. Department of Labor. "Today's report shows that my plan to build an economy from the bottom up and the middle out is working to get America back to work," Biden said. "Since I took office, the economy has created 7.4 million jobs. That's 7.4 million jobs providing families with dignity and a little more breathing room. We are building a better America."

If Biden is going to take credit for the fact that the economy is finally shrugging off the ill effects of the pandemic, then he has to take the blame for the lingering problems like supply chain issues and rising inflation too.

It has never made sense to me that we credit our politicians one way or the other for the state of the economy. The inflation rate, job creation and the stock market are the standard measures of economic performance, but a variety of factors go into how these standard measures of economic performance shake out at any given time. In terms of policy decisions, the chair of the Federal Reserve has more influence over the inflation rate than the president. It also has never made sense to me that a politician would want to tie their reputation to something like short-term economic measurements, over which they do not have more control.

Even though the economy is subject to a variety of forces, the policy choices politicians make matter. For the past 40 years, Democrats and Republicans alike have been in the thrall of neoliberal economics, the negative social consequences of which were so recently and ably detailed by Anthony Annett in his book Cathonomics, which I reviewed. A president may not be able to guarantee low inflation, but he or she can advocate for tax policies that ameliorate, instead of encourage, income inequality. He or she can advocate for social policies that guarantee basic services and opportunities for all, regardless of wealth. A president can also advocate for policies that protect and promote important social goods like combatting climate change, and not simply focus on GDP growth.

The Democratic Party used to advocate for just such policies, and Democrats enacted policies like Social Security, Medicare and Medicaid, the Affordable Care Act and a variety of environmental protections. President Biden still supports similar, and more forward-thinking, economic policies, but that gets lost when he allows himself to be judged by the inflation rate and the unemployment rate, and even more lost when he enters into hot-button culture war issues.

As for the Republicans? They have become the "Blame America First!" party, with Fox News hosts lamenting the state of the country, echoing Donald Trump's dystopian vision of American carnage. It produces a politics of resentment and nastiness. Even more reason for Biden and the Democrats to think more intelligently about how they can re-center the economic goals they can actually influence, like less income inequality, and let others take credit and blame for gas prices.