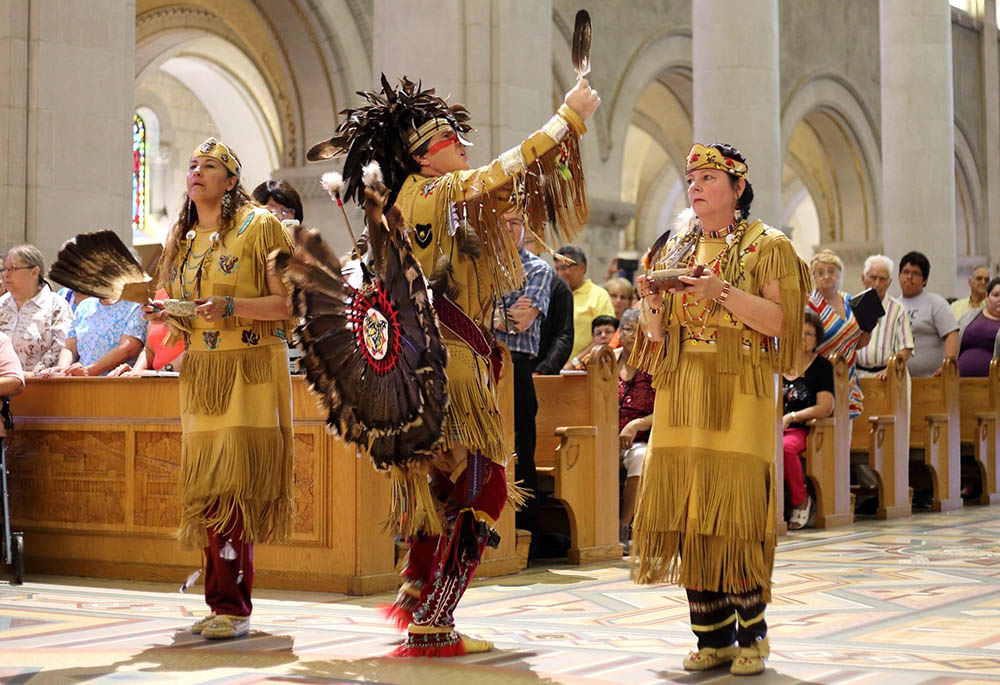 Members of the Huron-Wendat Nation perform a purification ritual at the Basilica of Sainte-Anne-de-Beaupré in Quebec June 26, 2016. (CNS/Presence/Philippe Vaillancourt)

Most obviously, Pope Francis is coming to Canada July 24-30 to face up to the Catholic Church's involvement in the country's abuse-ridden residential school system and the damage it inflicted on First Nation communities.

Many Indigenous peoples want Francis to make a clear apology for what happened on Indigenous land and commit to concrete action that promotes healing and right relationship.

That might be the easy part. The unseen work — and perhaps the more difficult work facing Francis — is with the rest of us, non-Indigenous.

We're still grappling with the reality that "Indigenous issues" are Canadian and American issues. Or that our nations exist, whether we like it or not, because of relationships with Indigenous peoples.

By becoming relatives with Indigenous peoples, the Rev. Ray Aldred argues, newcomers would be included into Indigenous peoples' relationship with the land, all the beings that inhabit it, and learn the ways of living in harmony.

For more than 500 years, these relationships have been one-sided. We've made Indigenous peoples enter into our societies and cultures and exist on our terms. It's time for us to do the same and reciprocate. By coming to Canada to face the legacy of the residential school system, Francis can model this reversal.

Francis can help us to overcome our fear and see all that we have to gain through authentic relationship. That's what the concept of a treaty is all about, according to the Rev. Ray Aldred, a Cree theologian and director of the Indigenous Studies Program at the Vancouver School of Theology. In his April 27 talk "Indigenizing Canada: Reconciliation as Embracing a New Identity," Aldred explained that a treaty is not the establishment of lines in the sand separating warring parties but a kind of adoption ceremony, or "making of relatives." 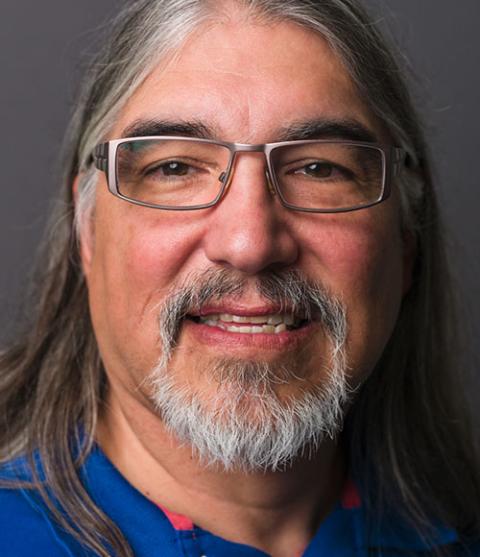 The Rev. Ray Aldred (Courtesy of Vancouver School of Theology)

Aldred points to Servant of God Nicholas Black Elk's theology in The Sacred Pipe, who says the making of relatives is "a reflection of that real relationship which always exists between man and Wakan-Tanka," the Creator. By becoming relatives with Indigenous peoples, Aldred argues, newcomers would be included into Indigenous peoples' relationship with the land, all the beings that inhabit it, and learn the ways of living in harmony.

Robin Wall Kimmerer's fleshes this out in her bestselling book Braiding Sweetgrass. By honoring responsibilities to Indigenous communities and respectfully learning from Indigenous ways of knowing, newcomers can begin to enter into a "moral covenant of reciprocity" with all of the natural world. This covenant leads to the flourishing of both humans and other-than-humans, where "people and land are good medicine for each other."

Instead of fear and loss, Francis can show us this beautiful vision of possibilities. By recognizing relationship and building patterns of atoning for our failings, we can grow out of our cultural limitations, such as our tendency to reduce land to a resource, how we make the economy the final arbiter in decision-making, and our disconnection from relationship with all the life around us.

We can go from being immigrants in a foreign land to becoming, in the words of Kimmerer, "naturalized to place."

At first glance, this may seem like an impossibly tall order. But look around and you'll see a growing number of examples of how church organizations are starting this shared journey of right relationship. The Jesuits in South Dakota returned 525 acres to the Lakota in 2017 and have started a Truth and Healing process at Red Cloud Indian School, a former boarding school, led by Maka Black Elk. The Sisters of St. Joseph, of Brentwood, New York, are finding ways to use their 200-plus-acre campus to partner with the Shinnecock Indian Nation.

There is a lot of work to be done on the Vatican side — meaningfully addressing the legacy of the Doctrine of Discovery for example — but Francis should be confident in the assets of the papacy.

Pope John Paul II began this reversal on a global stage with his visits to North America and Australia in the 1980s. "Christ, in the members of his Body, is himself Indian," John Paul proclaimed during his 1984 visit to Canada. He also allowed himself to be smudged, or ceremonially purified with the smoke of a sacred herb such as sage, a revolutionary act that affirmed Indigenous spirituality within a church that once participated in its persecution.

Francis can push this further and affirm that the church, despite contradiction and complicity, has always been Indigenous. The true church in Turtle Island, an Indigenous name for North America, is not that of the residential schools but of the often ignored, even persecuted anti-colonial church that grew among Indigenous peoples from the very beginning. 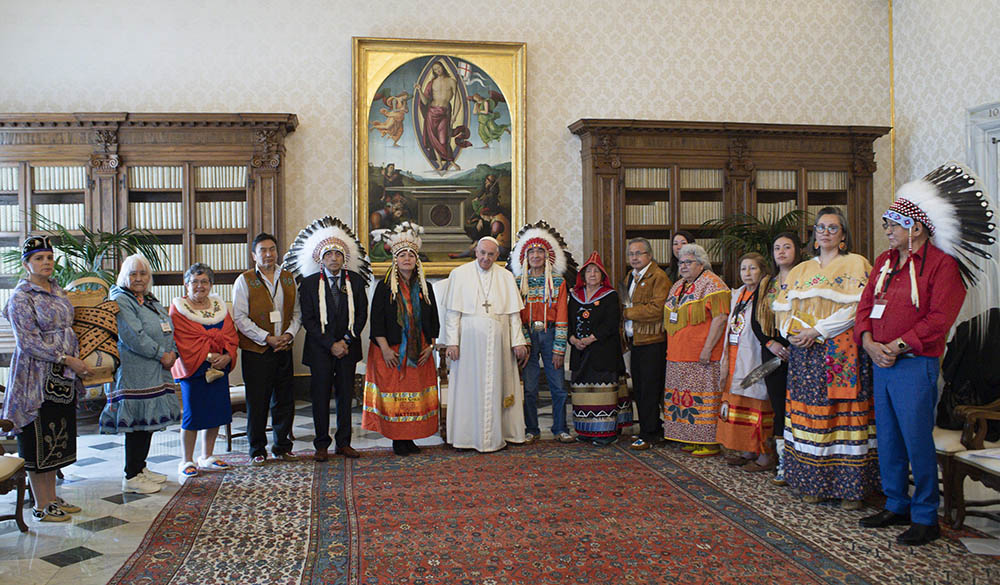 Pope Francis is pictured with Indigenous delegates from Canada's First Nations during a meeting at the Vatican March 31. (CNS/Vatican Media)

Many know the story of the Virgin of Guadalupe, the mother of Jesus who appeared as an Indigenous woman to an Indigenous man who brought the message to the colonial church. Less know the story of her contemporary, the Taino Cacique Enriquillo, a devout Catholic who led a successful 15-year rebellion against the conquistador occupation of what is now Haiti and the Dominican Republic.

An Indigenous future is dawning across the globe and Francis can show us we are called to be a part of it by highlighting the witness of Indigenous Christians.

Black Elk had a vision of Christ in the Ghost Dance who has the medicine to heal all the wounds of the land yet stays with us forever in the Eucharist. The Eucharist is the Creator's treaty with us, the great making-of-relatives ceremony that promises to raise us up to Divine life, what Aldred describes in his article "The Land, Treaty, and Spirituality: Communal Identity Inclusive of Land" as the model for Treaty Spirituality.

There will be a whole range of responses, but Indigenous peoples will be listening to Francis. May the Spirit open the hearts of the rest of us to embrace our identity as Treaty People and the promise it holds for the future.