Protesters opposed to a plan to deny Communion to pro-choice politicians march in Baltimore Nov. 15 before the U.S. bishops' meeting. A counter-protester yelled at Jamie Manson, executive director of Catholics for Choice, third from the right. (Photo courtesy of Women's Ordination Conference)

Protests are common at gatherings of the U.S. Conference of Catholic Bishops, which often touch on national politics or attract heavy media scrutiny, such as during the height of the Catholic sex abuse crisis.

On the first day of the meeting, a coalition of liberal-leaning Catholic groups protested outside the hotel where the bishops were to meet in a closed, executive session. Calling their demonstration "Bread, not Stones," about 50 participants marched, prayed and gave speeches expressing disapproval with what they describe as efforts by bishops to politicize the Eucharist.

The demonstration was focused on a planned debate at the U.S. bishops' meeting over a document on Communion. Although the document is expected to be less political than some critics originally feared, the controversy surrounding its creation drew international attention after some bishops suggested denying the Eucharist to Catholic politicians who support abortion rights. 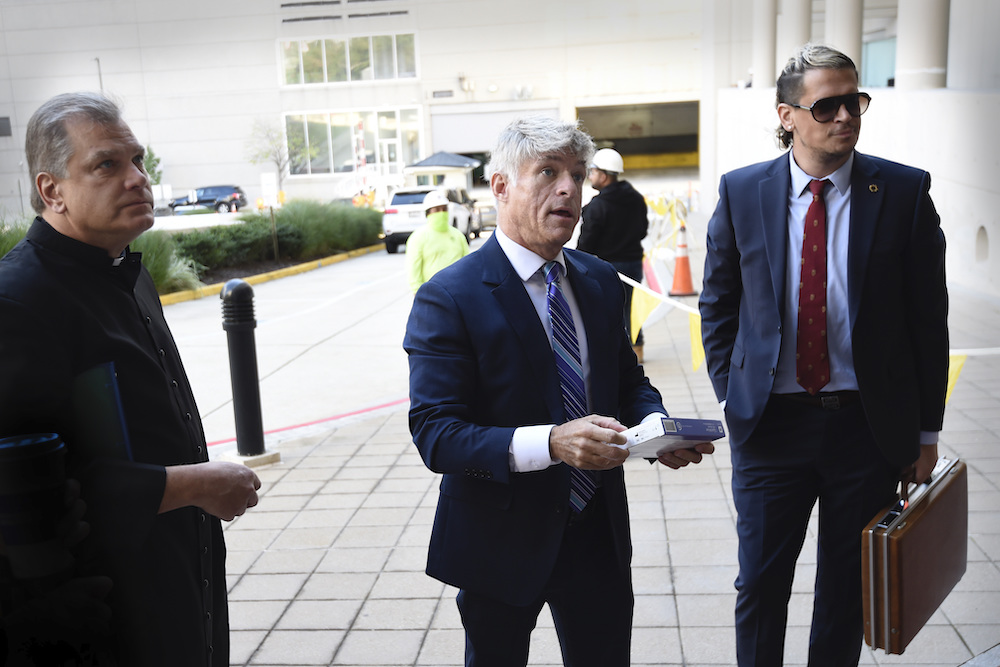 Signs included messages such as "Who would Jesus deny?"; "Communion is for all"; and "Eucharist: food for a hungry soul." Organizations helping to assemble the protest include Catholics for Choice, Women's Ordination Conference, DignityUSA and FutureChurch.

"We are here today standing for all the Catholics, the vast majority of Catholics, who cherish the Eucharist and who do not want to see this central sacrament of our church weaponized for culture war purposes," said Marianne Duddy-Burke, executive director of DignityUSA, which supports justice, equality, and full inclusion of LGBTQI people in the church and society.

"We are here in an effort to prevent the bishops who lead the Catholic Church in the United States from denying Communion to any of our Catholic elected leaders or public servants because their conscience leads them to support pro-choice or pro-equality policies in our pluralistic society," she said.

Duddy-Burke said the protesters believe that "Communion should not be coercion."

"We are here because we know that the Eucharist represents the love of Christ for all of God's people," she said "It must not be allowed to become a reward for obedience to the will of a group of bishops."

Later, a heckler interrupted Jamie Manson, executive director of Catholics for Choice, shouting, "Get out of my sight" and accusing LGBTQ people of being a "violation of the natural law" and a "sin against nature."

A second protest, the planned "prayer rally" by Church Militant, a controversial conservative Catholic media outlet known for espousing incendiary rhetoric that is sometimes condemned by critics as inflammatory, racist and homophobic, has been particularly fraught. The event, which organizers say is designed to express a range of grievances with U.S. bishops, is slated to occur on Nov. 16 in a pavilion that sits alongside the Baltimore Waterfront Marriott — the hotel hosting the U.S. bishops' conference.

Church Militant, which is based in Detroit but has been rebuked by leaders of the local archdiocese, organized similar protests outside the Marriott during past U.S. bishops' meetings. But this year's effort has drawn additional attention for its speaker lineup — particularly the inclusion of Milo Yiannopoulos, a far-right agitator, and Steve Bannon, onetime adviser to former-President Donald Trump.

News of participation from Yiannopoulos and Bannon sparked concern among Baltimore city officials, who sued to stop the protest in September. Lawyers for the city cited safety concerns, noting in their legal filing that violence has erupted at past events headlined by Yiannopoulos and that Bannon has previously called for beheading political opponents — namely, suggesting he would put the heads of infectious disease expert Dr. Anthony Fauci and FBI Director Christopher Wray "on pikes."

In addition, lawyers accused Church Militant founder Michael Voris of praising people who attacked the U.S. Capitol on Jan. 6. During a broadcast that day, Voris referred to insurrectionists as "American patriots" who were "fed up with the fraudulent election" — a reference to the widely debunked claims of massive voter fraud during the 2020 election.

Church Militant, also known as St. Michael's Media, rebuffed the city's arguments and insisted their rally was lawful, citing their First Amendment right to free speech. They ultimately prevailed: A federal judge ruled in their favor in October, paving the way for the protest.

"We are disappointed by the Court's decision and remain concerned about the potential public safety threat to Baltimore City property posed by the rally," Cal Harris, the mayor's communications director, said in a statement. "Protecting Baltimore residents and their property is our top priority, however, we will abide by the direction of the courts."

A spokesperson for Church Militant told Religion News Service the rally, known as the "Enough Is Enough" gathering, is meant to "provide a venue and voice for 100s of thousands of victims of the bishops' abuse (physical, financial, spiritual, liturgical and doctrinal)." According to the Associated Press, Yiannopoulos testified that he wanted to speak at the event because he is a survivor of sexual abuse by a priest and wants to encourage others to "confront the enablers and abusers."

As for unease about potential violence, the spokesperson said Church Militant "has no concern about violence emanating from legitimate attendees of the rally," adding that the organization is taking "various precautions" to prevent disruptions.

"St. Michael's Media is a Catholic non-profit completely dedicated to peacefulness and have never condoned violence, despite the City's fraudulent claims, which were shot down by the Court," read a statement from the group.

The spokesperson confirmed one speaker recently had a "change in their plans" regarding the event, which is expected to include a number of controversial conservative Catholic figures. The spokesperson did not name which speaker may be dropping out but noted it was "not Bannon."

Bannon was indicted on contempt of Congress charges Nov. 12 for defying a subpoena from the House committee investigating the Jan 6 insurrection. Before his court appearance on Nov. 15, Bannon turned himself at an FBI field office in Washington. But prosecutors did not seek to detain Bannon before trial, and he was released from custody.

It was not immediately clear how the indictment would impact his apparent attendance at the rally.

A spokesperson for the U.S. bishops' meeting declined to comment on the Church Militant rally.

Other groups have launched virtual protests ahead of the gathering, such as a petition calling on Los Angeles Archbishop José Gomez, the current president of the U.S. bishops' conference, to apologize for a recent speech in which he categorized social justice movements as "pseudo-religions." The petition, which has garnered more than 12,600 signatures as of Nov. 15, is a joint effort by liberal-leaning groups Faith in Public Life and Faithful America.

"Catholic bishops and other religious leaders should be out in the streets with these movement organizers — not demeaning them with language that only emboldens opponents of racial equity," the petition reads.

Another Catholic group, Pax Christi USA, also released an open letter to Gomez this week, decrying his remarks as denoting a "negative and misleading stereotype."

Heidi Schlumpf contributed to this report.