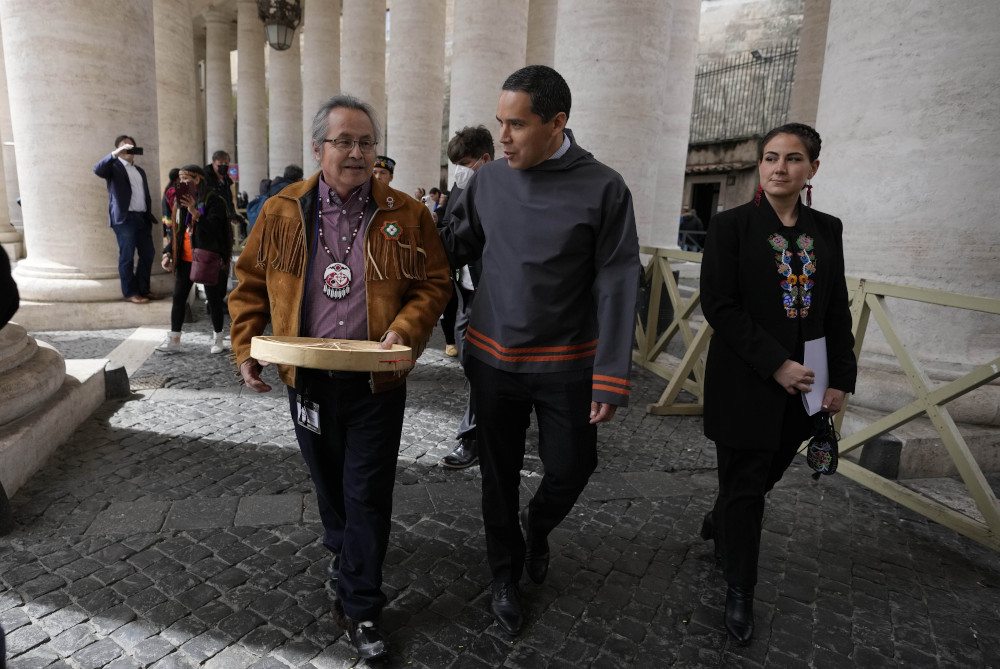 The Vatican Museums are home to some of the most magnificent artworks in the world, from Michelangelo's Sistine Chapel to ancient Egyptian antiquities and a pavilion full of papal chariots. But one of the museum's least-visited collections is becoming its most contested before Pope Francis' trip to Canada.

The Vatican's Anima Mundi Ethnological Museum, located near the food court and right before the main exit, houses tens of thousands of artifacts and art made by Indigenous peoples from around the world, much of it sent to Rome by Catholic missionaries for a 1925 exhibition in the Vatican gardens.

The Vatican says the feathered headdresses, carved walrus tusks, masks and embroidered animal skins were gifts to Pope Pius XI, who wanted to celebrate the church's global reach, its missionaries and the lives of the Indigenous peoples they evangelized.

But Indigenous groups from Canada, who were shown a few items in the collection when they traveled to the Vatican last spring to meet with Francis, question how some of the works were actually acquired and wonder what else may be in storage after decades of not being on public display.

Some say they want them back.

"These pieces that belong to us should come home," said Cassidy Caron, president of the Metis National Council, who headed the Metis delegation that asked Francis to return the items.

Restitution of Indigenous and colonial-era artifacts, a pressing debate for museums and national collections across Europe, is one of the many agenda items awaiting Francis on his trip to Canada, which begins Sunday.

The trip is aimed primarily at allowing the pope to apologize in person, on Canadian soil, for abuses Indigenous people and their ancestors suffered at the hands of Catholic missionaries in notorious residential schools.

More than 150,000 Native children in Canada were forced to attend state-funded Christian schools from the 19th century until the 1970s in an effort to isolate them from the influence of their homes and culture. The aim was to Christianize and assimilate them into mainstream society.

Official Canadian policy in the late 19th and early 20th centuries also aimed to suppress Indigenous spiritual and cultural traditions at home, including the 1885 Potlatch Ban that prohibited the integral First Nations ceremony.

Government agents confiscated items used in the ceremony and other rituals, and some of them ended up in museums in Canada, the U.S. and Europe, as well as private collections.

It is possible Indigenous peoples gave their handiworks to Catholic missionaries for the 1925 expo or that the missionaries bought them. But historians question whether the items could have been offered freely given the power imbalances at play in Catholic missions and the government's policy of eliminating Indigenous traditions, which Canada's Truth and Reconciliation Commission has called "cultural genocide." 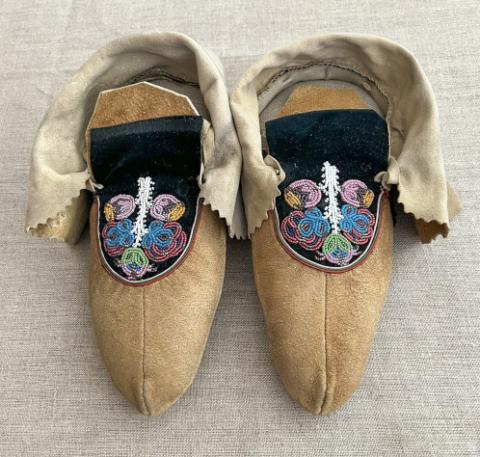 This undated photo provided July 20 by Gregory Scofield shows a pair of moccasins he made in the late 19th-century Cree-Metif native Canadian traditional style. (AP/Courtesy of Gregory Scofield)

"By the power structure of what was going on at that time, it would be very hard for me to accept that there wasn't some coercion going on in those communities to get these objects," said Michael Galban, a Washoe and Mono Lake Paiute who is director and curator of the Seneca Art & Culture Center in upstate New York.

Gloria Bell, a fellow at the American Academy in Rome and assistant professor in McGill University's department of art history and communication studies, agreed.

"Using the term 'gift' just covers up the whole history," said Bell, who is of Metis ancestry and is completing a book about the 1925 expo. "We really need to question the context of how these cultural belongings got to the Vatican, and then also their relation to Indigenous communities today."

Katsitsionni Fox, a Mohawk filmmaker who served as spiritual adviser to the spring First Nations delegation, said she saw items that belong to her people and need to be "rematriated," or brought back home to the motherland.

The Inuit delegation, meanwhile, inquired about an Inuit kayak in the collection.

The Vatican Museums declined repeated requests for an interview or comment.

Opening the revamped Anima Mundi gallery space in 2019 with artifacts from Oceania as well as a temporary Amazon exhibit, Francis said the items were cared for "with the same passion reserved for the masterpieces of the Renaissance or the immortal Greek and Roman statues."

"Using the term 'gift' just covers up the whole history. We really need to question the context of how these cultural belongings got to the Vatican, and then also their relation to Indigenous communities today."

You might miss the Anima Mundi if you were to spend the day in the Vatican Museums. Official tours don't include it and the audio guide, which features descriptions of two dozen museums and galleries, ignores it entirely. Private guides say they rarely take visitors there because there is no explanatory signage on display cases or wall text panels.

Margo Neale, who helped curate the Vatican's 2010 Aboriginal exhibition at the Anima Mundi as head of the Centre for Indigenous Knowledges at the Australian National Museum, said it is unacceptable for Indigenous collections today to lack informational labels.

"They are not being given the respect they deserve by being named in any way," said Neale, a member of the Kulin and Gumbaingirr nations. "They are beautifully displayed but are culturally diminished by the lack of acknowledgement of anything other than their 'exotic otherness.' "

In Victoria, British Columbia, Gregory Scofield has amassed a community collection of about 100 items of Metis beadwork, embroidery and other workmanship that he tracked down and acquired via online auctions and through travel and made available to Metis scholars and artists.

Scofield, a Metis poet and author of the forthcoming book Our Grandmother's Hands: Repatriating Metis Material Art, said any discussion with the Vatican should focus on granting Indigenous scholars full access to the collection and, ultimately, bringing items home.