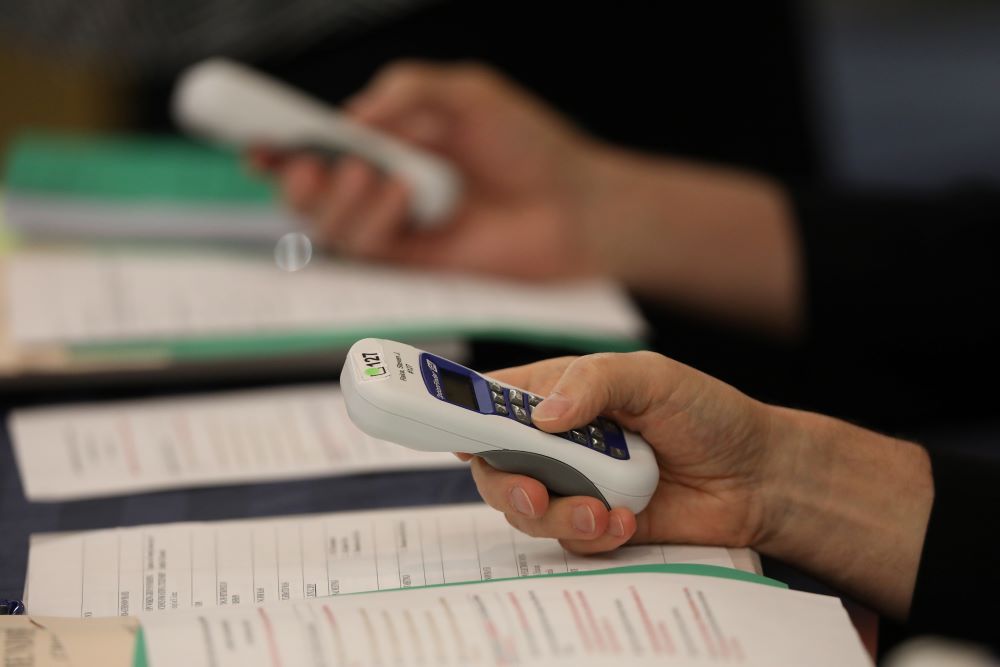 Bishops use electronic voting devices during the 2019 spring general assembly of the U.S. Conference of Catholic Bishops in Baltimore. When the bishops meet Nov. 15-18 in Baltimore, their agenda includes review of a draft on "eucharistic consistency" and elections for treasurer and several committee chairs. (CNS/Bob Roller)

As the nation's Catholic bishops begin their annual fall assembly in Baltimore on Nov. 15, much attention will focus on the debate over a document that was originally meant to address pro-choice Catholic politicians like President Joe Biden.

But during the four-day event the bishops will also vote to elect a new treasurer for their national conference, as well as five new chairmen of their standing committees. The bishops selected will have a year to learn their new duties before beginning three-year terms in November 2022. They likely will exercise leadership and influence in the conference for years to come.

The slate of prelates nominated includes a few well-known figures, but also several lower-profile prelates whose ideologies run the gamut from conservative to liberal.

Jesuit Fr. Tom Reese, a journalist who has covered bishops' meetings for decades, told NCR the outcome of these committee elections can be political, personality-driven or based on simple geography.

"All these kinds of things can come into play," said Reese, former editor-in-chief of America magazine and a columnist for Religion News Service. "One of the toughest things is getting guys to run for the office sometimes."

Mercy Sr. Sharon Euart, executive director of the Resource Center for Religious Studies, said the committee chairmanships can have a significant impact on the conference, depending on the topic and circumstances.

"It depends on what the agenda is, the agenda of the bishops and the agenda of Rome," said Euart, a former associate general secretary to the U.S. bishops' conference.

The bishops attending the Nov. 15-18 general assembly will be voting on candidates from all four regions of the United States, but none from areas where archbishops have traditionally been elevated to cardinals, noted Massimo Faggioli, a church historian and professor of theology and religious studies at Villanova University.

‘My impression continues to be that the most important prelates in the United States have more or less given up on the USCCB.’

"There's no Philadelphia, there's no New York, there's no Boston," said Faggioli, who told NCR that he believes the influential "Vatican II bishops" who support Pope Francis and his vision for the church appear to not be investing too much time and energy into the bishops’ conference.

"My impression continues to be that the most important prelates in the United States have more or less given up on the USCCB," said Faggioli, who suggested that the bishops' conference today is "in the hands" of prelates who are "out of sync" with Francis.

"The bishops and cardinals who are in sync with his pontificate, they are playing largely outside the USCCB. That seems to me to be the fundamental dynamic of these last few years," Faggioli said.

Among the nominees for election in Baltimore are five bishops who appear to be among "rising stars" of the national conference. Some are known for prioritizing similar issues as Francis, such as immigration, economic injustice, climate change and reaching out to those on the margins. Others have not been always known for emphasizing issues favored by the pope.

Etienne, 62, has been the archbishop of Seattle since September 2019. The Indiana native, who was ordained a priest for the Archdiocese of Indianapolis in 1992, has previously served as the archbishop of Anchorage, Alaska, and as bishop of Cheyenne, Wyoming. 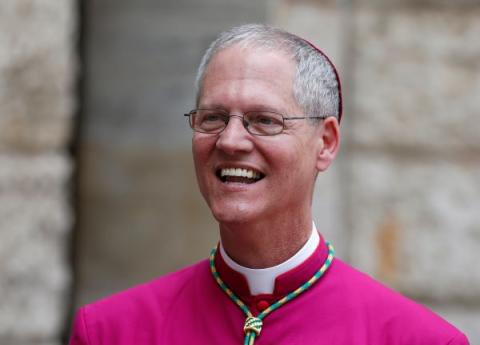 Etienne, a former parish priest, vocations director and seminary vice-rector, struck a Francis-like note in 2019 when he announced that he would not live in the archbishop's mansion. "I prefer to live a more simplified life," he said at the time.

In June, Etienne said he would vote against the proposed document on "eucharistic consistency" that more conservative prelates hope will include norms to deny the Eucharist to pro-choice politicians. Etienne said the document had become too politicized.

"Jesus came into the world to save, not to condemn," said Etienne, who added that the document was "enmeshed in a way … that makes it very difficult for us to keep the Eucharist as it's, I think, intended by the Lord himself."

The other nominee for treasurer-elect is Metuchen, New Jersey Bishop James Checchio, a former rector of the Pontifical North American College in Rome.

Rozanski, 63, a Baltimore native, was named an auxiliary for his home archdiocese by Pope John Paul II in 2004. Since Francis became pope in 2013, Rozanski's profile has risen. In 2014, Rozanaksi was appointed as the bishop in Springfield, Massachusetts, where he served for six years before Francis chose him in 2020 to lead St. Louis, an archdiocese often called the "Rome of the West." 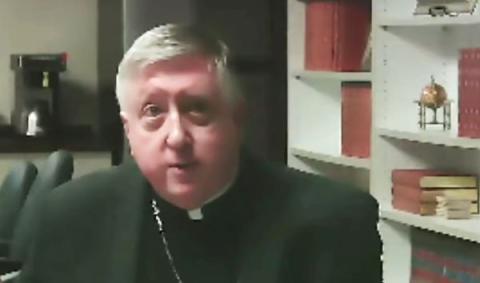 Archbishop Mitchell Rozanski of St. Louis is a nominee for chairman-elect of the Committee on Divine Worship. (CNS photo/Screen Grab)

Rozanski has been a parish priest and is a previous chairman of the conference's Committee for Ecumenical and Interreligious Affairs. As a young auxiliary bishop in Baltimore, Rozanski was vicar for Hispanic Ministry and supported Maryland's DREAM ACT to allow some migrants living in the country illegally to receive in-state college tuition.

After becoming bishop in Springfield, Rozanski told The Catholic Review that it was important for the church to "look outward." Last year, he told NCR that there has to be "more dialogue, more understanding."

Rozanski has embraced Francis' vision of a more synodal church. He was one of 67 church leaders who signed a letter in advance of the conference's general assembly in June to urge that the prelates not vote on the "eucharistic consistency document."

Bishop Steven Lopes of the Personal Ordinariate of the Chair of St. Peter
Nominee for chairman-elect, U.S. bishops' Committee on Divine Worship

In 2015, Lopes, now 46, became the first bishop of the church structure in North America that Pope Benedict XVI created for Catholics who had left the Anglican Communion. Lopes was previously an official in the Vatican's Congregation for the Doctrine of the Faith and a personal aide to Cardinal William Levada, the former head of that office and a former Archbishop of San Francisco. 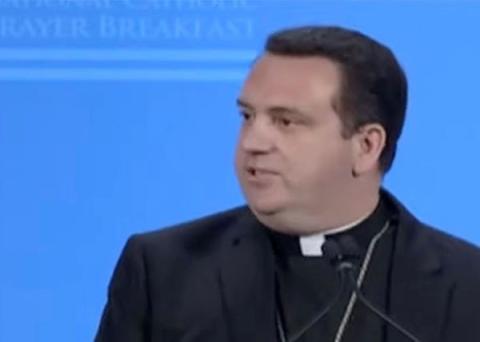 Bishop Steven Lopes of the Personal Ordinariate of the Chair of St. Peter is a nominee for chairman-elect of the Committee on Divine Worship. (CNS screen grab/YouTube, EWTN)

Lopes, whom Levada ordained a priest in 2001, also served as secretary for the Vatican commission that developed a new missal that blends Roman and Anglican liturgical elements for the new ordinariates.

More recently, Lopes was a member of the working group that Archbishop José Gomez, the conference president, formed after Biden's election in November 2020 to consider the implications of a pro-choice Catholic being elected president. That group recommended the document on "eucharistic consistency."

Lopes is one of eight bishops on the U.S. bishops' doctrine committee, which was charged with writing the draft of that document. At the National Catholic Prayer Breakfast in September, Lopes delivered a speech in which he said that "unity requires truth," or else it will fail.

Reese, the journalist, called Lopes' nomination for the liturgical committee "bizarre" in that he leads a unique church structure with a liturgy that is quite distinct from the Latin Rite.

"It's not quite the same as electing an Eastern rite bishop to that job, but it's a head-scratcher," Reese said.

Barron, 61, is arguably the best-known auxiliary bishop in the United States. When Francis appointed him as one of the Los Angeles Archdiocese's five auxiliaries in 2015, Barron was already a Catholic "celebrity" as the founder of Word on Fire, a multimedia organization. 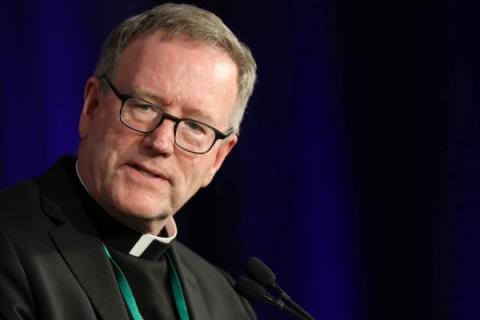 Barron, the former rector of Mundelein Seminary in Chicago, hosted the Catholicism series, which ran on public television. He has published several books, columns and essays about spiritual matters and current events in secular and Catholic publications. He has provided commentary on secular cable news networks.

On the Internet and social media, Barron — the current chairman of the conference's Committee on Evangelization and Catechesis — is an active figure, producing YouTube videos and hosting Reddit "ask me" sessions where he comments on the intersections of Catholic matters, popular culture, atheism, faith and politics.

Over the years, Catholics on the left and the right have criticized Barron: the right for what they see as him watering down difficult truths, such as the possibility of being sent to hell for sin; the left for what they see as Barron dismissing social justice as "wokeness" and cozying up to right-wing figures like Jordan Peterson and Sohrab Ahmari.

Barron counters that he will engage anyone willing to dialogue.

Barron's popularity could be enough for his brother bishops to vote for him over the lesser-known Bishop Edward Burns of Dallas, though historically the higher-ranking prelate is chosen.

"We're a hierarchical organization, and there's a deference to people with bigger titles," Reese said. The Jesuit added though that is "not always the case" and noted that Barron has name recognition and other bishops see him as someone who can communicate effectively with young people.

As the bishop of a city that borders, Ciudad Juárez, Mexico, Seitz has been a leading voice for migrants, refugees and asylum seekers. 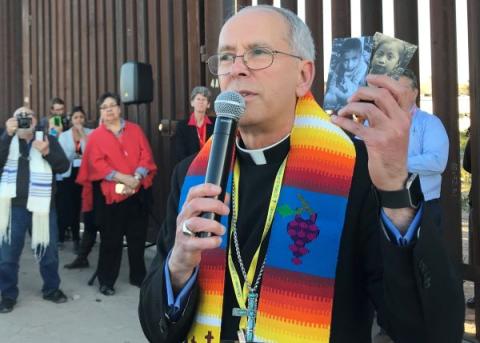 Bishop Mark Seitz of El Paso, Texas, is a nominee for chairman-elect of the Committee on Migration. (CNS/David Agren)

In June 2017, he wrote a pastoral letter on immigration that said elected leaders had "not yet mustered the moral courage" to enact comprehensive immigration. In July 2019, he and others escorted seven Central American asylum seekers to the Santa Fe international bridge in Ciudad Juárez to assist them in claiming asylum.

Seitz, 67, has also spoken out against racism and white supremacy. He wrote a pastoral letter on the topic in the aftermath of an August 2019 shooting at a Walmart in El Paso, where a gunman who espoused anti-Hispanic and anti-immigrant views killed 23 people and wounded dozens of others.

"If we are honest, racism is really about advancing, shoring up, and failing to oppose a system of white privilege and advantage based on skin color," wrote Seitz, who in 2020 took a knee while holding a Black Lives Matter sign during a rally in El Paso.

More recently, Seitz has called on the Biden administration to do away with the Trump-era Migrant Protection Protocols that require migrants and asylum-seekers to stay in Mexico while their immigration and asylum cases are pending in the United States. Seitz is currently a member of the conference's Subcommittee on the Church in Latin America.

On political matters and controversies related to abortion, Seitz wrote in America magazine last year that some Catholics "in pursuit of 'single-issue' strategies to end abortion" had "scandalously turned a blind eye to real breakdowns in solidarity and dehumanizing policies" such as  crackdowns on worker rights and voting rights, racism, and the exploitation of migrants and the environment.

The other nominee for the Committee on Migration is Miami Archbishop Thomas Wenski.

Related: US bishops to choose culture war or communion in Baltimore
This story appears in the USCCB Fall Assembly 2021 feature series. View the full series.