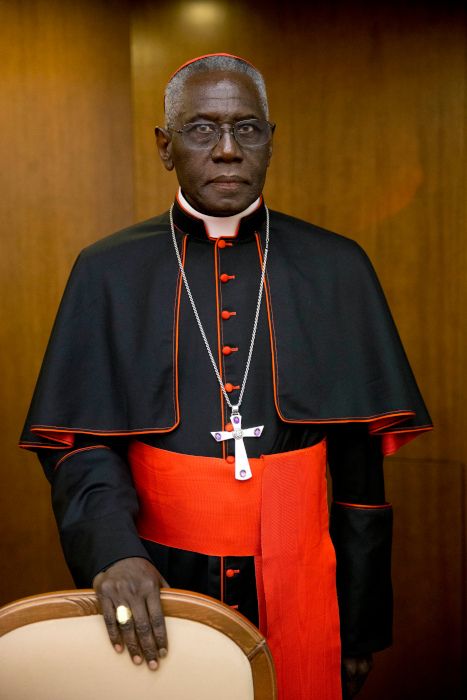 In this Oct. 14, 2015 photo, Cardinal Robert Sarah, prefect of the Congregation for Divine Worship and the Discipline of the Sacraments, arrives for the presentation of Cardinal Raymond Leo Burke's book Divine Love Made Flesh, in Rome. Cardinal Sarah, the highest ranking signatory of a petition signed by some conservative Catholics claiming the coronavirus is an overhyped pretext to deprive the faithful of Mass and impose a new world order, and which has run into a bit of a hitch, claims he never signed the petition. But archbishop Carlo Maria Vigano, who spearheaded the initiative, said Friday, May 8, 2020 that Sarah was fully on board with it, and has the recorded phone conversations to prove it. (AP/Andrew Medichini)

Rome — A petition signed by some conservative Catholics claiming the coronavirus is an overhyped "pretext" to deprive the faithful of Mass and impose a new world order has run into a bit of a hitch.

The highest-ranking signatory, Cardinal Robert Sarah, head of the Vatican's liturgy office, claims he never signed the petition. But the archbishop who spearheaded it said May 8 that Sarah was fully on board, and he has the recorded phone conversations to prove it.

Thus Sarah, the Ghanaian-born hero to the Catholic right-wing, has landed in another he-said-he-said controversy, following the polemics over a book he penned with retired Pope Benedict XVI on priestly celibacy that created a huge firestorm earlier this year.

The virus petition, signed mostly by Italian clergy, academics and journalists, is the latest initiative by conservative believers from a variety of faiths to frame COVID-19 lockdowns as an assault on religious liberty, a threat to the global economy and a conspiracy to separate families.

It was issued May 7, the same day the Italian government and bishops conference reached an agreement to resume Masses starting May 18, with strict security protocols in place, after a two-month shutdown.

The petition says the virus emergency is a "pretext" by unnamed actors to manipulate and control people through panic and deprive them of their fundamental freedoms, including freedom of worship. It warns that measures to impose contact-tracing devices, require vaccinations and "criminalize" contact between grandparents and grandchildren is "a disturbing prelude to the realization of a world government beyond all control."

It is the latest manifesto from Archbishop Carlo Maria Vigano, the former Holy See diplomat who achieved notoriety with his 2018 j'accuse of a high-level Vatican cover-up of sex abuse and has gone on to opine — negatively — on everything from the Vatican's China policy to Pope Francis' outreach to Muslims and his Amazon synod.

Aside from Sarah and Vigano, the prominent signatories include three other conservative cardinals who have been critical of Francis' papacy, including the ousted prefect of the Congregation for the Doctrine of the Faith, Cardinal Gerhard Mueller, and the retired archbishop of Hong Kong, Cardinal Joseph Zen.

It's the latest firestorm that has at its center both Sarah and Vigano, the retired Holy See diplomat who threw Francis' papacy upside down with his 2018 claims of a two-decade cover-up of disgraced ex-Cardinal Theodore McCarrick.

Sarah, meanwhile, grabbed headlines in January when he released a book with Benedict as co-author asserting the necessity of keeping the Catholic priesthood celibate. It created a ruckus because it implied that the retired pope was trying to influence the ruling one, who at that very time was weighing whether to allow married priests in the Amazon, to relieve a priest shortage.

As in the petition back-and-forth over who agreed to what, Benedict's secretary insisted the retired pope never agreed to be co-author and asked that his name be removed from future editions of the book as an author.

Seeking to clear his name and show Benedict was indeed on board, Sarah provided contemporaneous notes of his dealings with the retired pope.

It's a similar tactic to the one Vigano is now using to show that Sarah was indeed on board with the virus petition despite his claims to the contrary.

Sarah tweeted May 7 that while he might "share some questions or preoccupations" about fundamental freedoms raised by the petition, he didn't sign it, and shouldn't, given his role as a Vatican official.

In a statement May 8, Vigano made clear Sarah had indeed signed on, but said he would act "profoundly charitably" toward the cardinal and forgive him "for the grave crime he committed against the truth and myself."

He then proceeded to give a time-stamped chronology of his communications with the cardinal, saying he had the duty to issue a "fraternal correction" to set the record straight.

He quoted Sarah as telling him May 4: "I give my consent to put my name on it because it's a fight we have to conduct together, not just for the Catholic Church but all humanity."