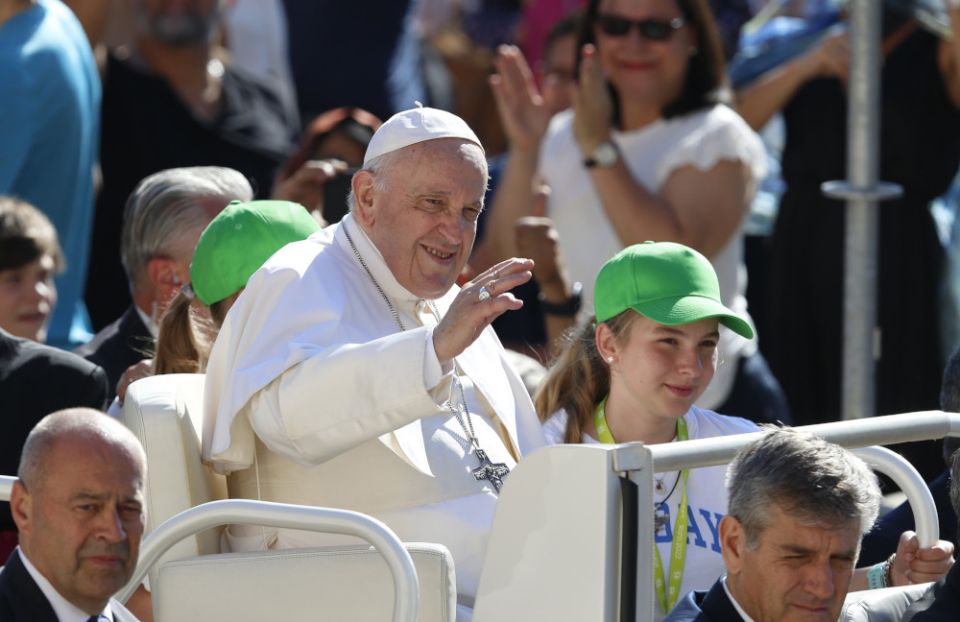 Children ride in the popemobile as Pope Francis greets the crowd during his general audience in St. Peter's Square at the Vatican June 8, 2022. (CNS photo/Paul Haring)

ROME — The United States contains a "significant" number of groups seeking to "gag" the reforms of the Catholic Church initiated by the Second Vatican Council, Pope Francis said in a new interview.

"In the European Church I see more renewal in the spontaneous things that are emerging: movements, groups, new bishops who remember that there is a Council behind them," said Francis in a conversation with the editors of Jesuit journals of Europe.

"Restorationism has come to gag the Council," he continued. "The number of groups of 'restorers' — for example, in the United States there are many — is significant."

The conversation between the pope and the editors took place on May 19 and a transcript of the encounter was published in the Jesuit journal La Civiltà Cattolica on June 14.

Over the last year, Pope Francis has instituted a number of reforms meant to serve as a correction to Catholics who have rejected the teachings of the Second Vatican Council.

Among the reforms of Vatican II, which took place from 1962-1965, was the approval of the translation of the liturgy from Latin into vernacular languages, in an effort to make the Mass more accessible and involve greater participation of the laity.

Some of the most vocal critics of those reforms have come from the U.S. Catholic Church.

Yet despite the pope's rebuke of those seeking to roll back changes in the church, he also offered a word of caution in discussing Germany's Synodal Path, in which a number of church leaders and laity have backed calls for the restoration of women deacons and for church blessings of gay unions.

"The problem arises when the synodal path comes from the intellectual, theological elites, and is much influenced by external pressures," he said. "There are some dioceses where the synodal way is being developed with the faithful, with the people, slowly."

Francis also discussed the ongoing turmoil in the Cologne Diocese, where Cardinal Rainer Maria Woelki has recently returned from a forced six-month sabbatical following an investigation into his handling of clergy abuse cases.

Since then, his future in the diocese has been uncertain, and Francis indicated he had yet to make a final decision on whether the cardinal will remain in his post.

"I asked the archbishop to go away for six months, so that things would calm down and I could see clearly. Because when the waters are rough you cannot see clearly," Francis recalled. "When he returned I asked him to write a letter of resignation. He did and he gave it to me. And he wrote a letter of apology to the diocese."

"I left him in his place to see what would happen, but I have his resignation in hand," he continued.

On the ever-pressing issue of the war in Ukraine, Francis said he refused to reduce the conflict to a situation of "good guys and bad guys, in an abstract sense."

The pope again asserted his view that perhaps NATO's expansion motivated Russia's aggression against Ukraine, and that the war was "perhaps somehow either provoked or not prevented."

Yet Francis also flatly rejected charges that he was "pro-Putin," marking a rare occasion of the pontiff actually speaking the name of Russian President Vladimir Putin.

"I am not," he said. "It would be simplistic and wrong to say such a thing."

"I am simply against reducing complexity to the distinction between good guys and bad guys without reasoning about roots and interests, which are very complex," he said. "While we see the ferocity, the cruelty of Russian troops, we must not forget the real problems if we want them to be solved."

Francis also observed that the Russians had "miscalculated" in their decision to invade Ukraine, thinking "it would all be over in a week."

"They encountered a brave people, a people who are struggling to survive and who have a history of struggle," the pope said.

The two had originally discussed meeting in Jerusalem this month, though the Vatican acknowledged that the timing could potentially lead to "confusion" given that Kirill is a key backer of Putin's war against Ukraine.

"I hope to be able to greet him and speak a little with him as a pastor," said Francis.