by Nicole Winfield, The Associated Press
Vatican
This article appears in the War in Ukraine feature series. View the full series. 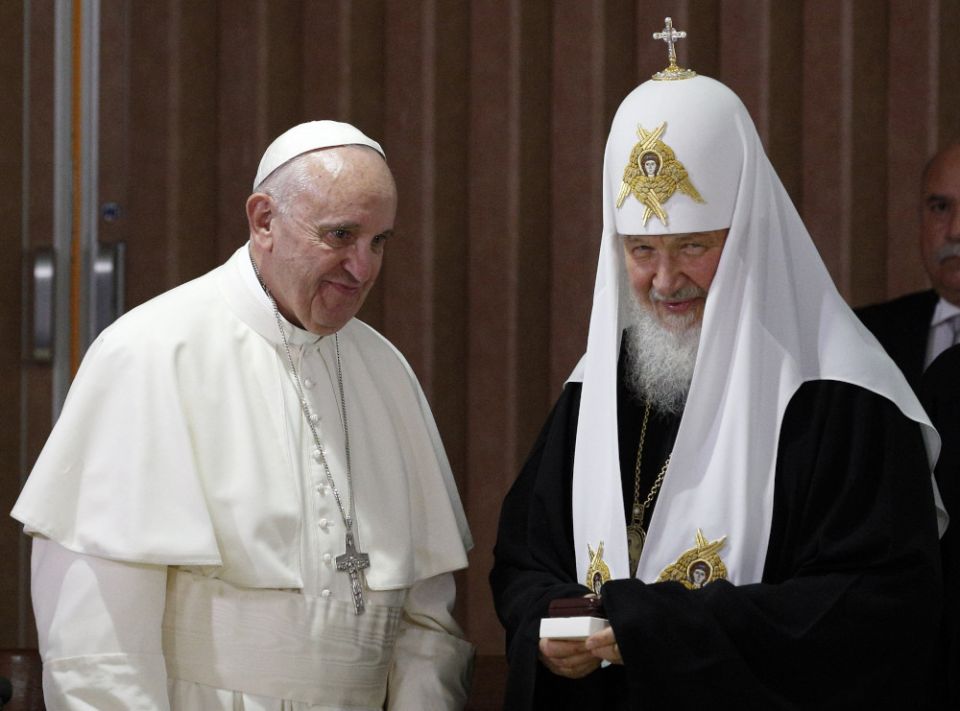 Pope Francis presents gifts to Russian Orthodox Patriarch Kirill of Moscow after the leaders signed a joint declaration during a meeting at Jose Marti International Airport in Havana in this Feb. 12, 2016, file photo. (CNS photo/Paul Haring)

Vatican City — The Vatican said May 31 that Pope Francis will travel to Kazakhstan in September for an interfaith conference, a meeting that may give him a chance to meet with the head of the Russian Orthodox Church.

The meeting with Patriarch Kirill would be significant given Kirill's justification for Russia's war in Ukraine. Francis called off a planned encounter with Kirill in June in Jerusalem because of the diplomatic fallout it would have created.

The Kazakh government is hosting a "Congress of Leaders of World and Traditional Religions" on Sept. 14-15 in the capital, Nur-Sultan. Kirill has been invited and the Moscow Patriarchate has said he would attend.

The Vatican confirmed that Francis had also decided to attend in a joint statement issued Tuesday marking the 30th anniversary of diplomatic relations between the Holy See and Kazakhstan.

"The continuation of peaceful coexistence in the face of contemporary challenges is achievable only through an inclusive and comprehensive dialogue," the statement said. "Therefore, Kazakhstan welcomes the decision of Pope Francis to attend" the September congress.

Francis has criticized the devastation of the war but has been keen to avoid antagonizing Kirill and derailing decades of ecumenical outreach to the Russian Orthodox Church.

Francis and Kirill met in Havana in 2016 in the first such encounter between a pope and Russian patriarch.

Pope's quotes: God hopes in you

With no pope in residence, Vatican opens gardens of summer villa