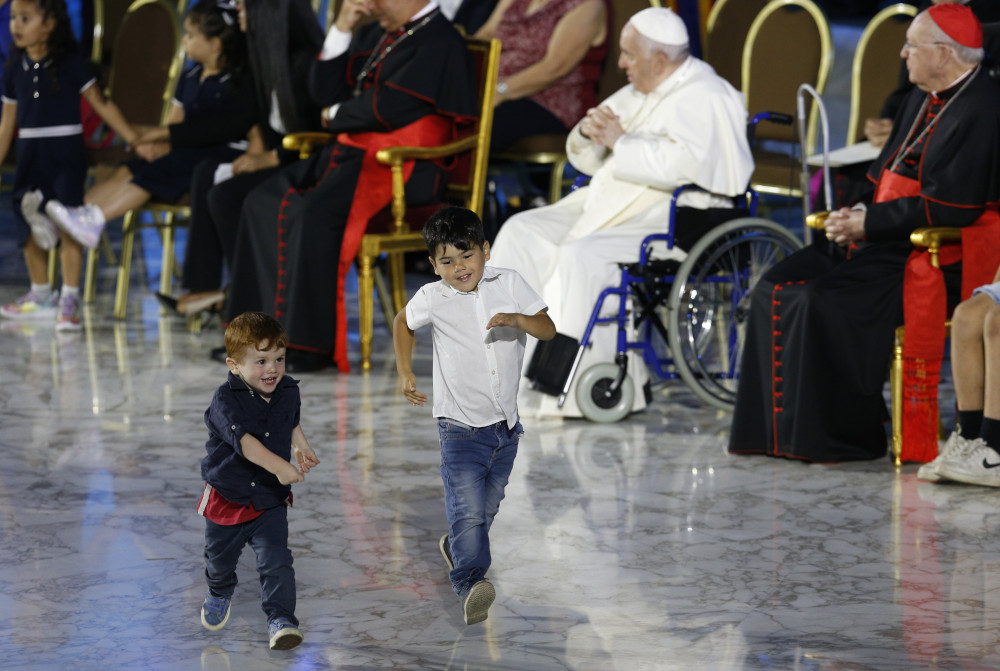 Pope Francis reaches out to a young boy as he attends the Festival of Families in the Paul VI Hall at the Vatican, on the first day of the World Meeting of Families, Wednesday, June 22, 2022. (AP Photo/Andrew Medichini)

The Vatican on June 23 released the itinerary for Pope Francis' July 24-30 visit to Canada, providing a sign he intends to go ahead with the trip despite knee problems that forced him to cancel a similarly difficult visit to Africa.

Francis is due to visit Canada to apologize to Indigenous peoples for abuses at Catholic-run residential schools.

Francis will also have a private meeting with survivors of the schools in remote Iqualuit, where he is due to visit for a few hours on his way back to Rome on July 29.

Francis, 85, has been using a wheelchair for over a month because of strained ligaments in his right knee that have made standing and walking difficult.

The publication of the itinerary was delayed for nearly two weeks, leading to speculation Francis might be forced to cancel traveling to Canada as he did his before a planned July 2-7 pilgrimage to Africa.

And the itinerary doesn't mean the trip is 100% confirmed, since there is now precedent for the Vatican pulling the plug after one was released.

The Vatican published the itinerary for Francis' planned trip to Congo and South Sudan on May 28. It announced on June 10 that the pope's visit would have to be rescheduled for an undetermined later date because of doctors' concerns the trip might jeopardize the therapy he is undergoing.

Francis met with Indigenous groups earlier this year and offered a historic apology for the abuses they endured.

"We know that the Holy Father was deeply moved by his encounter with Indigenous Peoples in Rome earlier this year, and that he hopes to build on the important dialogue that took place," the coordinator of the Canada visit, Archbishop Richard Smith, said. "We pray this pilgrimage will serve as another meaningful step in the long journey of healing, reconciliation and hope."